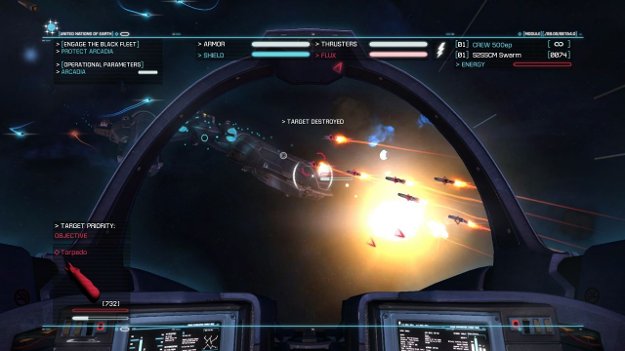 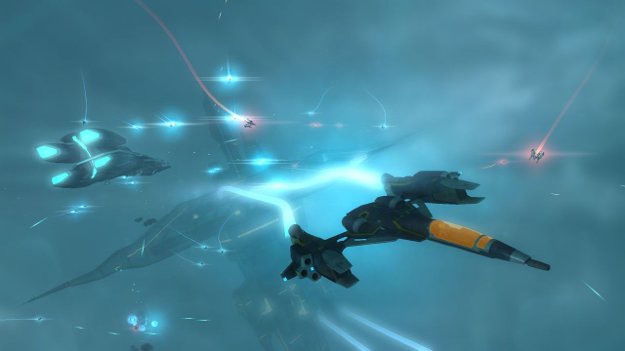 I’ve always had a soft spot in my heart for space combat games. There’s something about dealing with foes in the three dimensional combat of space that really gets the blood boiling. For the longest time my favorite game series was Wing Commander due to this love for leaving my foes to die in the cold vacuum of space. So when this genre went out of vogue it was a pretty hard blow for me, with only the super hardcore games to tide me over (like the X series).

But then a game like Strike Suit Infinity comes out to change all of that. It’s got everything one could ask for – a whole bunch of ships to fly, a solid amount of weapons to arm your ships with and numerous enemies just begging to be blown out of the sky. Hell it’s even got ship designs done by Junji Okubo, ship designer for Infinite Space and mecha designer for Appleseed: Ex Machina. If a relatively small, indie game like this does well for itself it could reignite the whole genre, especially with other bigger releases like Elite: Dangerous and Star Citizen coming out soon.

There’s very little in the way of plot for Strike Suit Zero that can be discussed without spoiling the whole plot. It’s a very threadbare story about the conflict between the United Nations of Earth and the Colonials, once Earth natives who now live a vast distance from their once home. Tensions between the two ran high enough that a war blossomed and has escalated to the point that this is very much a do or die situation for both sides. Your character, Adams, is quickly placed into the cockpit of the eponymous Strike Suit and it’s up to him, with the aid of a few trustworthy allies to use his ship to put a stop to the senseless violence with some violence of his / her own.

The Strike Suit itself is the entire point of the game and one of the more interesting elements in the game. During flight you will start off in Pursuit Mode and in this mode the Strike Suit acts like any other ship – you can spin and twist around to avoid enemy attacks, perform high speed flight and use EMP bursts to protect yourself from missile impacts. As you fly around you will gather up ambient energy that charges up a meter, the Flux meter. It goes up faster as you shoot down enemies, destroy turrets or take hits yourself.

After gathering up enough Flux charge you can morph into Strike Mode, shifting into something that looks like a giant mecha. In this form you lose some maneuverability as well as your EMP in exchange for an incredible amount of firepower. You can easily lock on and snap to targets, blasting them to debris in moments. If that’s not to your taste then you can lock onto multiple targets and send streams of missiles flying at your victims. This missile barrage is a hell of a sight to behold and watching the damage it can wreak on enemy forces is just impressive. 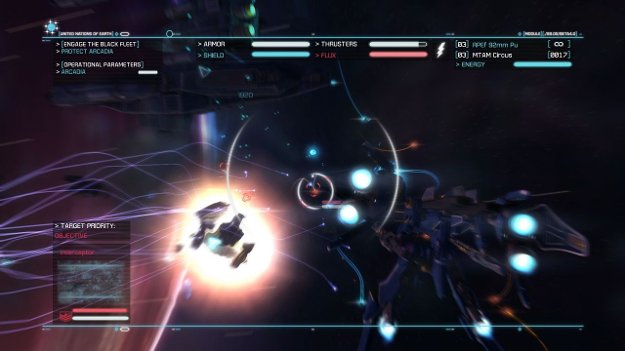 Missions are a rather simple affair – pick your mission, choose your ship and then choose your weapon load out. You fly out to your objective, listen to some talking, blow some ships out of the sky, listen to more talking and blow more ships out of the sky. Repeat until mission ends. Repeat from stage to stage. It’s a simple arcade style space shooter all the way thanks to a simple but effective game design that makes the game frantic and rather exciting. Lasers will be flying, missiles will be incoming (and must be stopped with your EMP), rockets will be exploding and it’s just a symphony of chaos. What doesn’t work so well is the story heavy nature of the game.

In a game like Wing Commander you get fed the story before and after missions. This means that, on a replay, you can either skip the story or re-watch the cutscenes at your leisure. But all of the story dialogue is integrated into the missions in Strike Suit Zero which means that every time you play a mission you have to listen to it again and again. Some of this is obviously unavoidable, such as dialogue that comes up thanks to an ambush or a plot point that comes up due to gameplay, but there’s too much of it for a game like this. It ruins the flow of the arcade style shooting and since you end up replaying levels multiple times to get upgrades (via completing optional objectives) or to earn a higher score (to get the good ending) it becomes very invasive. 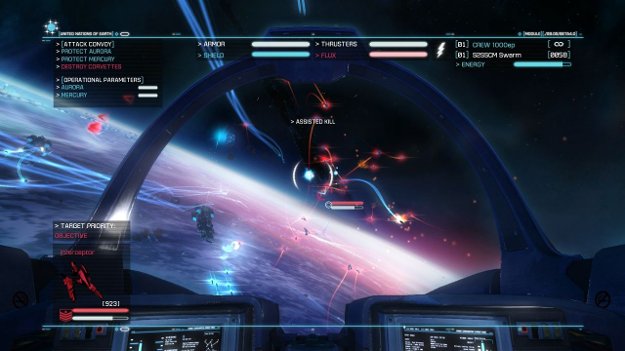 While it is possible to get around this flaw by simply playing the game from beginning to end and not paying any mind to the upgrades or ending, it does ruin the experience. This is a game that’s designed to have you get pummeled by enemy lasers and going up against capital ships in your dinky little fighter craft so if you don’t go for these upgrades you’re only making the game harder on yourself. So you end up replaying stages multiple times, hearing the same dialogue multiple times and it all just gets kind of repetitive. By the time I was about five levels into the game I was intensely bored with the experience already.

An interesting part of the game is how unimpressive it is graphically. At first I was pretty annoyed by the simple graphics but then I got into my first big space battle and understood the decision entirely. Explosions and chaos are the norm in these gunfights and some of the stages have dozens of ships flying around and blasting at each other to the point where it can be difficult to tell what’s going on. But at no point did I ever experience slow-down of any kind due to this and that’s pretty amazing.

With that said, the weak graphics can still be incredibly distracting, especially on the larger objects, such as the space stations and capital ships. It’s especially a shame since it means that all of the ships look, at best, okay. At worse they look kind of cruddy. The Strike Suit should look really awesome when it’s changing form but it honestly doesn’t, instead looking like a few round LEGO blocks moving on thin struts. 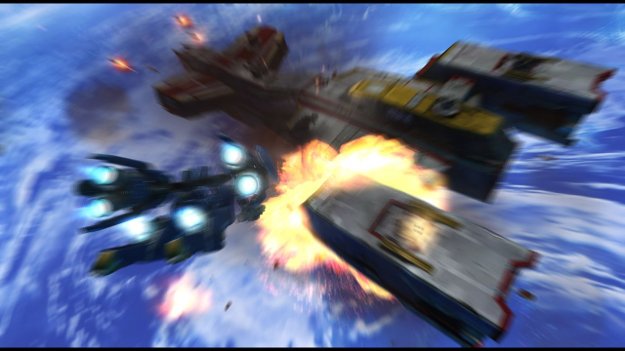 On the other hand this game has a surprisingly exceptional sound design working in its favor. The voice acting isn’t necessarily extensive but pretty much all of the characters sound believable and it’s clear that the voice actors were at least putting some effort into it. But the music is what really blew me out of the water – it’s absolutely amazing. The music is done by Paul Ruskay who worked on the Homeworld games but I never really had a chance to play them and enjoy his work so this was an absolutely pleasant shock. Much of the music is this mellow, almost somber electronic music with a female vocalist singing in this hauntingly melancholic tone... It’s absolutely gripping. It sets this odd dissonance with the frantic combat but it fits perfectly considering the content of the story, which is surprisingly dark, that it just works together amazingly well.

So what’s the real takeaway here? Well Strike Suit Zero: Director’s Cut is for a very specific sort of person. It’s hard to truly recommend it to anyone who isn’t already a fan of space shooters since being an arcade style space shooter is its entire appeal. It’s almost like a throwback to games past which is great if you loved them before, not so much if you’ve never been interested in them. But if you are a fan then that review score up there doesn’t mean much and you should almost definitely play it since it has a lot to recommend. It’s just not likely to make many converts.