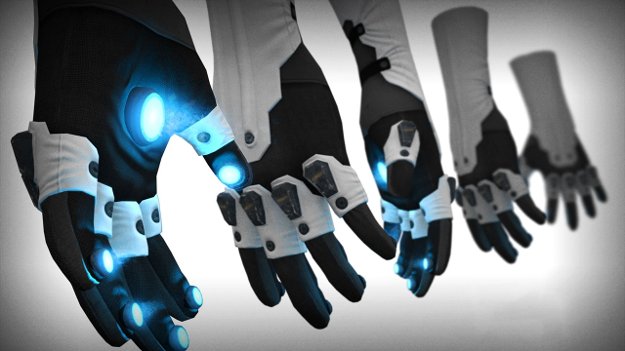 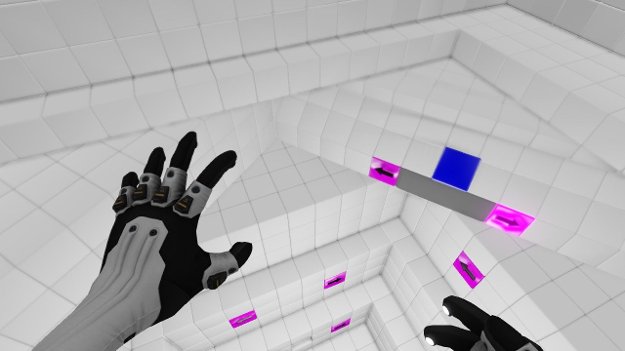 When Portal was released into the wild back in the long, forgotten year of 2007 I was rather sure there would be imitators. Whenever a movie or film strikes it big the wanna-be’s usually aren’t that far behind. But I’ve always staunchly believed that there’s a big difference between a product being inspired by another, successful, one and it just flat out ripping it off. Luckily, Q.U.B.E: Director’s Cut is no derivative mess. It is clearly inspired by Portal but it takes the basic ideas of that game and puts its own spin on them, making it a truly great experience.

There are two ways to play Q.U.B.E: Director’s Cut: First you can just jump right into things with Against the Qlock mode, essentially time trials to earn medals, but this would be a bad idea. Instead you’ll want to check out Story mode. It’s a bit on the short side but it teaches you all of the basics of the game while still being incredibly interesting in its own right 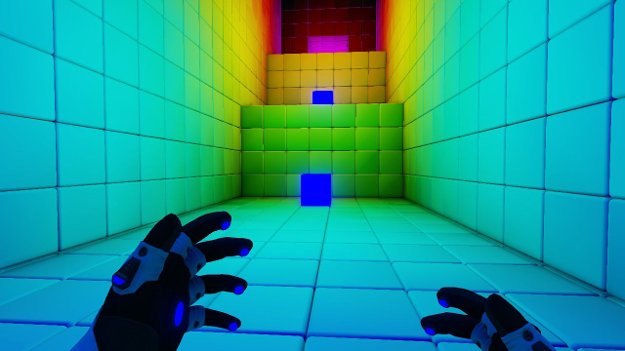 As is par for the course your character (gender is never specified) awakens in a strange construct seemingly made out of interlocking white squares. A woman speaks to you, claiming to be supporting you from the International Space Station, but you have reason to doubt her words. This is only made worse as a second voice, a strange male, begins encouraging you to not trust the woman. The conversations these two have with your mute protagonist contains a surprising amount of character development for two people you never even see which is a pretty big testament to the skills of the writer and the quality of the voice work.

That said you could easily ignore the story if you so chose to do so as the most prominent strength of the story mode is how it introduces the player to the puzzle elements. At first you learn how to make colored blocks extrude from / recede into walls and floors. Each color acts different - red can be made to stick out in a straight line up to three squares long while blue will springboard you to a great height. You’ll find yourself having a number of “Ah-hah!” moments as you get used to this.

But each sector that you clear will introduce newer, more complicated elements. So just when you get used to manipulating the colored blocks out of the walls they introduce purple switches that make entire sections of a room spin. Perhaps they’ll make you guide a colored ball down a ramp or even force you to guide the ball through transparent blocks that will recolor the ball for you. Some of the rooms will likely have you stumped until you get a really good handle on just what is going on, especially as some of the rooms seem to have unnecessary elements just to confuse you. Add that on to the fact that you can often improvise solutions that don’t seem to be the expected one but still work to solve it.

The story mode is a blast with only a few areas that will leave you scratching your head. There are a few insanely difficult puzzles that honestly felt like they didn’t even belong in the game, notably one dubbed “The Hardest Puzzle in the Game” by the in-game achievements which I honestly wish wasn't even in the game. While I blazed through most of the other puzzles in the game this one had me stopped for the longest time not because the puzzle was hard but because of how fiddly the mechanics of said puzzle are. It's enough to make you wish it wasn't even in the game. The special, hidden puzzles are much more frustrating than the regular ones but they’re completely optional. You’ll be amazed how much trolling the developers manage to cram into these extras considering how simple the gameplay is.

There are a few hiccups to be had in the experience but luckily they are few and far between. Some may be put off by the short length of the game but it honestly feels like it lasts as long as it really could. If it were to go on longer it would almost certainly begin to feel padded out. The physics of the game can feel a bit on the wonky side. For example if you bounce a ball into the air after it’s stopped moving it wouldn’t suddenly jerk forward into the hole you need to put it through, but it will here. However these physics hiccups seem designed specifically to make levels easier for you to get through. Without them the a few puzzles might be unreasonably hard but with their assistance it goes a lot smoother so it’s hard to really complain about it. 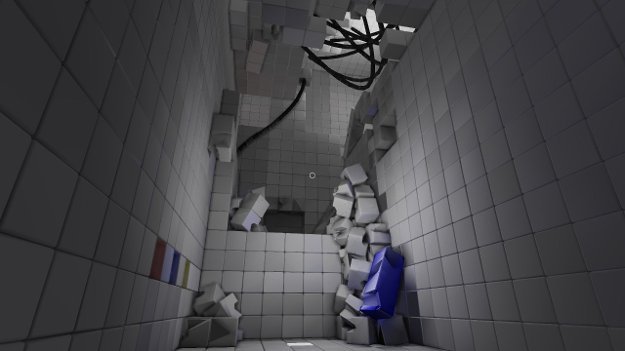 For a puzzle game like this it’s easy to neglect the audio or visual aspect of it, an issue I have with a lot of indie games. But that’s definitely not a problem here. The space station your character is currently trapped in has this sparse, monochromatic thing going for it that makes it simultaneously feel barren and inhospitable while also guiding your eyes to the colored squares. The audio only enhances this feeling thanks to it sparse, ethereal nature. It’s a new addition to the game, one that wasn’t in the pre-Director’s Cut version of the game, and it really compliments the visual design.

If you’re like me and you enjoy a good brain bender every now and again, Q.U.B.E. is a great experience. Most of the puzzles are very low stress while also managing to be very involving. You’ll feel frustrated when you get stumped by one but upon solving it, that successful feeling is hard to beat. Pair that up with the great visual aesthetic and ethereal soundtrack to make a hell of a game. Q.U.B.E: Director’s Cut is, simply put, one of the best puzzle games on the market today.