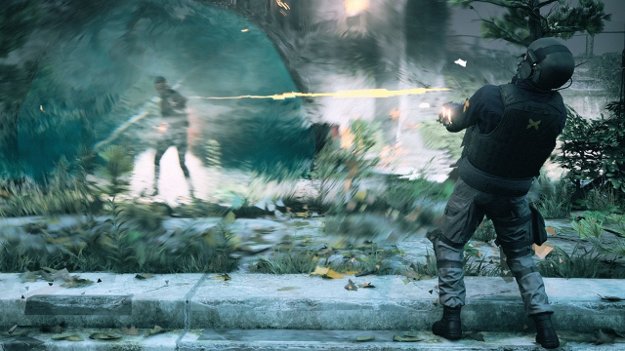 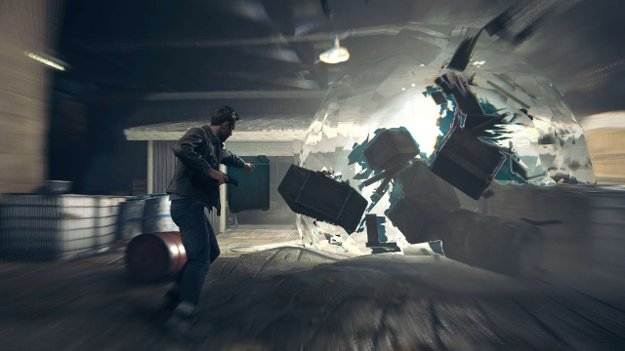 Where does one truly begin to tell a story? When the beginning is not the start and the end merely the commencement of another chapter, how does one flow through the narrative in a way that keeps the viewer engaged and not confused? This is a general issue that I’ve always had with time travel stories. You either get confused messes like the film Triangle, a movie that can’t get its own time travel straight, or far too full of itself, like some of the Matt Smith Dr. Who episodes. There’s a very fine line to walk and it’s not an easy one, even for the most skilled of writers, to navigate.

Keeping that in mind it wouldn’t be hard to say I was a bit nervous going into Quantum Break. I love Remedy Entertainment’s games but this is a story that, as its central conceit, is all about various violations that time itself has received. But after a short amount of play time I quickly realized that Remedy had hit on a great story with some very compelling game play. For me, Quantum Break shows what can be done with a damn good time travel story. 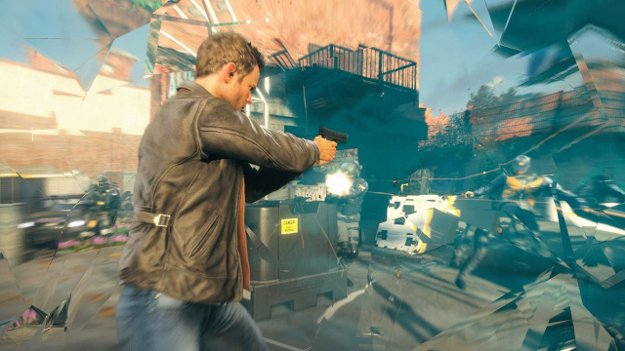 Jack Joyce is a bit of an odd fellow. Near as the story lets on he travels the globe, doesn’t get on well with his brother Will and he likes to get into trouble for causes. There are mentions of protests and traveling through mainland southeast Asian countries - basically just an affluent white guy in his twenties getting up to stuff. He gets a call from an old friend of his, by the name of Paul Serene, to come on back to the U.S. of A. for some reason he won’t explain but he goes along with for old times sake. From these innocuous beginnings a story about the struggle between two super-human time travelers unfolds. Thus we embark upon a story about embracing ones destiny and the hardships that one must endure as they walk along that path.

What makes Quantum Break work is primarily just how damn well written it is. The story manages to be both deep and fairly simple to follow. Since the story doesn’t get overly hung up on the details of what’s going on, other than to provide brief explanations where necessary, it flows along smoothly. Each act of the game is broken up into a few individual stages with each individual stage covering a different goal along Jacks’ path. This means that the game doesn’t really linger on any individual plot elements for any longer than they have to. They explore what an individual episode is about, let you gather collectibles that explain more about the game world and get your gun fight on. No dawdling on nonsense or just wasting time. It’s all just very economical. 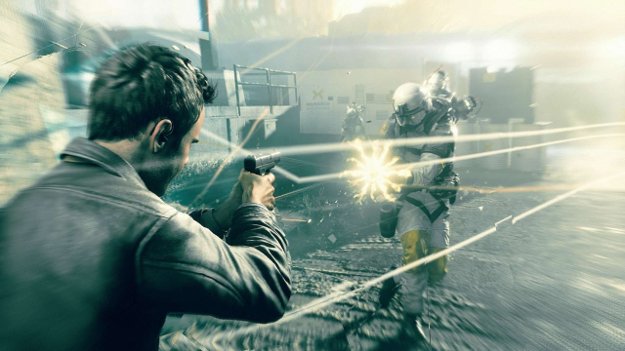 Unfortunately not all story elements live up to their potential. You see, Jack Joyce isn’t the only character that you control. Near the end of each episode you’ll get to control the antagonist for a short time. During these sequences the player makes decisions that shape the direction the antagonists will proceed for the future. So, as a made up example, they can choose whether to punch a baby or give that baby a lollipop. The antagonist can see the impact each path will have on the future and thus make an informed decision about which path he chooses to walk. This is a fantastic idea since it further invests you into the what the bad guys are getting up to.

But no matter which path you choose it doesn’t really impact the story near as I could tell. Events play out almost exactly the same with some minor flavor changes. An NPC might be different in one sequence or your decision might be mentioned in passing but that’s about it. I wouldn’t really even comment on it but the game treats these like they’re a big deal but they don’t feel like much of an addition. More could be done with it but it doesn’t feel like much to write home about right now. When paired up with the fact that some plot elements don’t really get explored, obviously a bit of sequel baiting, it creates some gaps in the narrative that are somewhat disappointing.

So while I’ve raved on about the story I haven’t spoken too much about the game play That’s because the story is just so damn well done that it naturally draws a lot of attention. But just as much effort went into crafting a stellar game play experience so I don’t want to sell it short. I loved Alan Wake and Quantum Break plays a lot like that game but with the addition of super powers. 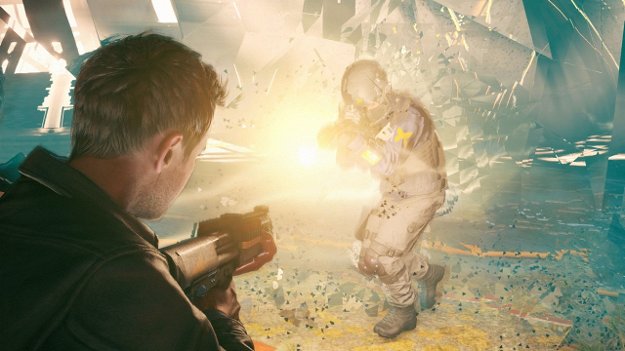 Shortly into the game Jack is exposed to the field of a malfunctioning time machine, exposure that grants him the ability to make time his plaything. This starts off by giving him super speed dodges as well as the ability to create a small orb that stops time for people caught in it. What’s neat is that if you fire at enemies trapped in the orb the bullets are held in place as well - pump enough of these into the barrier before it goes down and watch as the enemies inside are shredded by the accumulated gunfire. As the game progresses these grow in power until you’re hurling bursts of quantum energy or moving like DC super hero, The Flash.

This is made doubly great by how well the controls are setup. Each power is mapped to its own button and has its own individual cool down. With a few simple button presses, or holding down the button, you can pull off incredible power chains that rip through hordes of enemies. One memorable encounter had me pop out of cover, shoot an enemy in the face, super speed away from a grenade and perform a takedown on an enemy before turning around and blasting three enemies with a blast of energy. When the big guy finally figured out where I was I threw up a time stop on him and pumped ammo into him until he blew right the hell up. All of that without taking any damage from the confused suckers. Things don't always stay easy - as the stronger enemies start getting introduced you find yourself hard pressed to keep from getting gunned down - but even then you have all of the tools you'll need to wipe the floor with them. 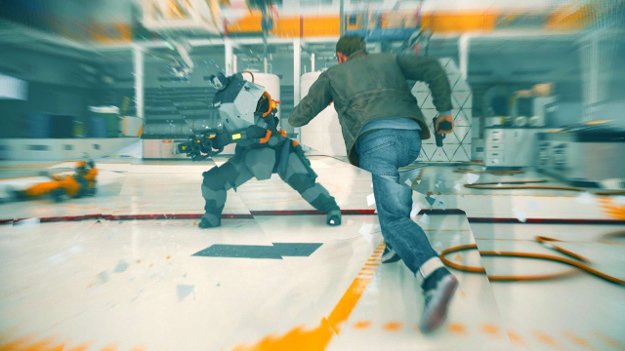 With how well the game is designed it may sound surprising that I initially put off of it due to the way cover is handled. Instead of having a dedicated cover button to allow you to move in and out of it, Jack will instinctively cling to cover when you move towards it. At first I felt like this was holding the game back but then I realized it isn’t that important and, even if they wanted to, there’s no button space left for it on the controller. Plus cover is highly destructible in this game so you’ll often find yourself hiding behind the barrier you can throw up for protection making it even less of an issue.

So if it has a great story and it plays great, how does the rest of the package hold up? Amazingly. I was honestly startled when I started playing the game and saw the quality of the graphics. All of the characters have incredibly smooth animations paired up with top notch graphics. If you liked the facial animations in L.A. Noire then you’ll be blown away by the quality of the motion capture here. It’s so damn lifelike that there are a few sequences where it almost tip-toes into the uncanny valley but most of these are centered around one specific character, William Joyce. When he’s not on screen it’s a massive treat. What also helps is that the world feels so full, so lived in, so... authentic. If you’re walking through an abandoned building there is clutter, debris and stuff that appears to have been left there by squatters. When going through a university there are posters, statues and bookshelves all over the place. These details grant the game a real world feel and after a gunfight breaks out and destroys all of those things it makes it feel that much more realistic.

I’m not the sort of person who thinks that good actor equals fantastic voice actor but this concept works out pretty well for Quantum Break. Shawn Ashmore is a great actor so he works very well as the primary face of the game. He mixes serious gravitas with levity in his delivery, giving him a feeling of someone who is torn by the events of the game but trying to stay sane about it. Aiden Gillen serves as the deuteragonist and does an excellent job at it. You can feel how torn he is by the events of the game, how damaged he is mentally by what he is forced to do. It’s very well acted. Dominic Monaghan brings a good enough energy to his role but when looking at his in-game model I swear that he looks like Gollum nowadays. He’s just so scrawny looking and... and those ears. Dear Lordie. All of the rest are quite good at their roles, especially in the live action episodes. 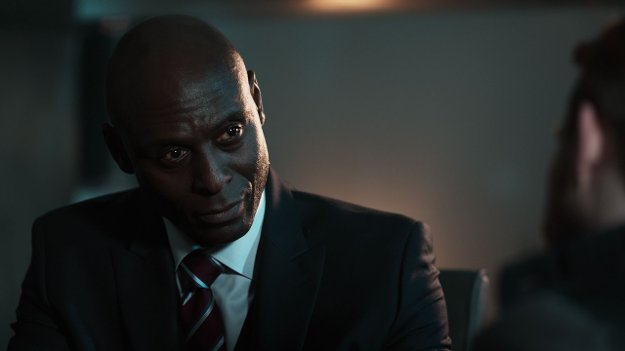 I haven’t touched on it yet but the live action episodes are possibly my favorite part of Quantum Break. When you play the game you get some glimpses into the actions the bad guys are taking but overall it mostly sticks to Jack Joyce’s narrative. But the episodes follow a number of side characters that mostly sit on the periphery of the story. Liam Burke, a heavy for the bad guys, is the primary character and while he is an antagonist from Joyce’s point of view the show does a lot to humanize him. It also introduces a number of other characters that really expand upon the events from the game. I’ve heard some grousing that the quality of the TV show isn’t really up to modern television but I don’t agree with this. While some special effects could be a bit better it’s still very high quality stuff. It feels like a lot of effort went into this part which made it quite rewarding to sit back to watch an episode after finishing up a few levels of the game.

Quantum Break is one of the major killer apps coming to the Xbox One this year. It’s been so heavily promoted and received a lot of attention but it manages to live up to all of it. It works damn hard to tell an engaging story focusing around time travel while simultaneously being both a great game and a fun TV show. Frankly this is one of the best experiences on the market right now so unless you truly loathe science-fiction works you’re doing yourself a disservice to not pick this one up. With no plans for DLC anywhere on the near horizon you can pick up a fantastic game, watch some fun television episodes and know that you’ve gotten the full story. Well as much as that cliffhanger allows.