Ori and the Blind Forest (Xbox One) 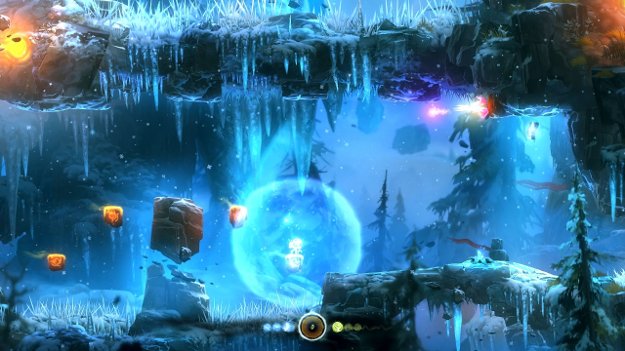 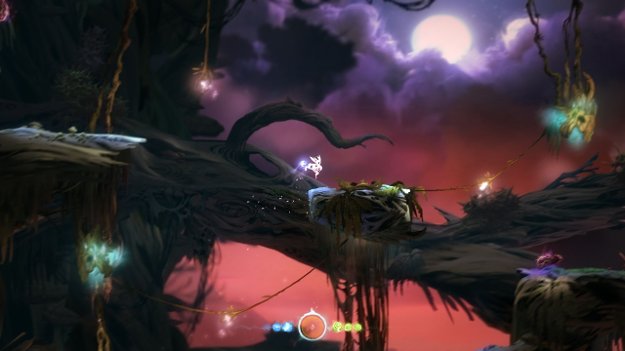 As a rather cynical person it’s pretty hard to get a rise out of me. There are very few works of media that manage to elicit any more of an emotion than a slight frown when something truly awful happens. Whether it’s a failing of myself, having difficulty connecting with the stories or characters I read about, or of media oversaturation in general is a hard question I’ll not dawdle on. I only bring it up because Ori and the Blind Forest made me feel absolutely awful for the poor little guy before the game even started.

Seriously, whoever wrote Ori and the Blind Forest watched Pixar’s “Up” a few times and decided that they were going to emulate that movies gut wrenching opening in video game form. Watch as Ori is separated from his home, only to find a new parent. Marvel as the two of them look adorable while they play, work and sleep together. Squee as they hug, cuddle or otherwise act adorable. Stare in abject horror as circumstances tragically tear the two of them apart. Let’s just move on before I get upset again… 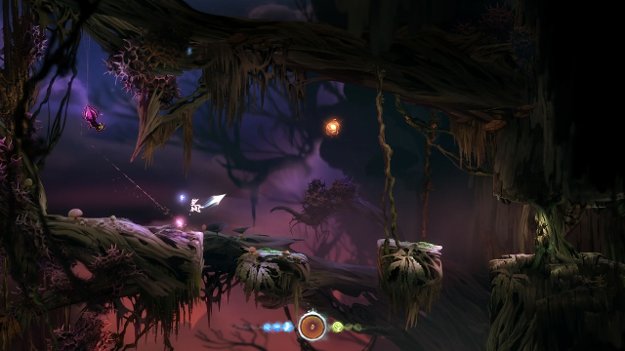 Once you stop bawling, you’ll control the small, rabbit-like, spirit named Ori as he journeys through a dangerous, decayed forest with only another small spirit, named Sein, as his companion. It is up to the pair to adventure through the woodlands of Nibel and reawaken the power of the ancient tree thus restoring balance to the land. This is done in the most time honored of traditions – collecting stuff!

In the vein of Metroid games since the days of the NES things start off simple. You begin with a basic jump, quickly gain the ability launch small fireballs via Sein and then from there the world slowly opens up to you. Playing through the plot will unlock new abilities for you, ranging from a Stomp attack to kick open passages to the ability to kick off of enemies and their energy attacks to rapidly maneuver the land. Other extra abilities can be opened up by spending experience points on them via the games very light RPG mechanics allowing you to, for example, triple jump or increasing the power of your fire attacks.

As you unlock these abilities you’ll gain access to even more areas of the world which lets you find extra health or energy pickups. So while you might finish up an area and move on to the next plot location you’ll often find yourself backtracking to gather missed power-ups. Of course most of these are simple bonuses and nothing you need but it all comes together to make the game easier for you in true Metroidvania fashion.

What makes or breaks a game of this style is how much fun getting around actually is. The last game of this genre that I personally enjoyed was Dust: An Elysian Tail back in 2012 and one of the main reasons I enjoyed that one was much was just how fun getting around was. Luckily Ori and the Blind Forest really has this one in the bag. Ori practically flies through the game: Ori’s basic movement speed is very fast and his jumps carry a heck of a lot of ground. Not only is it fast but it looks good. Ori’s movement is smooth as butter and every type of jump also has its own animation. So a standing jump forward looks different than a standing jump backwards which also applies to wall jumping. When you add on the various platforming abilities you’ll earn as the game goes on, traveling the world is not only quick but stylish.

What gets really interesting is when you unlock the Charge ability. Most of your abilities are fairly normal for this type of game involving double jumps, a glide ability or wall jumping. But Charge is a real game changer and very unique. When activated the game slows to a near stop and Ori locks on to a nearby enemy attack. From here you can aim the direction Ori will bounce off, allowing him to kick off the attack to maneuver around or even get greater jump distance. Even better is that the attack itself bounces in the opposite direction. You’ll use this in some really intriguing ways before the game ends and a few sections built around exploiting this ability are real highlights.

The unfortunate part of this is that while Ori initially appears to be a simple action-adventure with a bit of RPG on the side, it’s actually much closer to a pure platforming game. I’m not talking about Super Mario Bros or Metroid platforming either, I’m talking Super Meat Boy or 1001 Spikes. You’ll be passing through an area, clearing it without much difficulty and then WHAM! A one shot kill takes you by surprise. Or you’ll finish up the dungeon you were in only to be locked into an escape sequence that tasks you with several minutes of pure hell where one mistake sends you back to the beginning.

It’s bizarre too – Much of the time the game seems to go out of its way to be very easy on you. The controls are so responsive that they will almost never disappoint you. The upgrade system is very simplistic but it has a noticeable impact on your adventuring and combat capabilities. Heck the game even allows you to save your game at any point. By using up a bit of energy, the same energy used for charged special attacks, you can create a save point wherever you’re standing. You can use this to save or upgrade at any time you desire which makes the game seem very user friendly. But boy oh boy would they be completely and utterly wrong on that one because of these sudden, and severe, difficulty yanks. 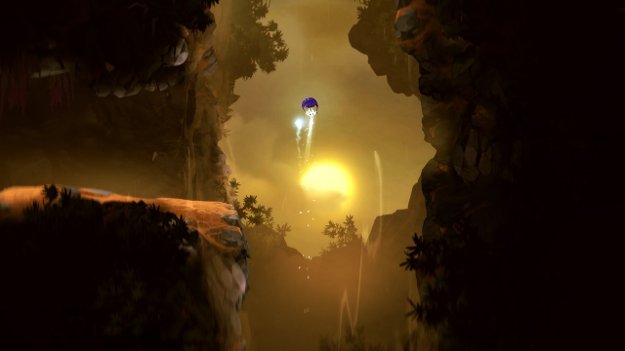 It’s not a problem at first really; you just adjust your approach and learn from your death. As time goes on though these deaths start to produce more and more eye rolling. That enemy rolling around down there? One shot kill. That invincible enemy firing laser blasts at you while you dodge that enemy? One shot kill. Those spikes you’re avoiding while ducking lasers and jumping over rolling enemies? You guessed it, one shot kill. It gets to a point where your health bar can often feel kind of redundant. Some of these areas get easier when you purchase new abilities or gain a larger health bar, bringing it up to a two shot kill instead, but these areas never stop being infuriating.

To make matters even worse the game tended to crash on me if I died too many times in rapid succession. I’m rather positive this isn’t my Xbox since I could reproduce this on my friends console but I know most people haven’t experienced this at all so the cause is unknown. Regardless, dying dozens of times in rapid succession to a stupid escape sequence only to have the game freeze and then crash to desktop doesn’t help matters.

On the other hand you can usually brute force your way through a tough situation no matter how bad it is due to the infinite lives. This means that the situation is less about cheap shots ruining your game and more cheap shots making a section take abnormally long. It shouldn’t stop you from playing but it may get under your skin. I'd also like to direct a bit of bile and anger towards whomever thought that an achievement for playing through the game without dying was even remotely fair with all of thi 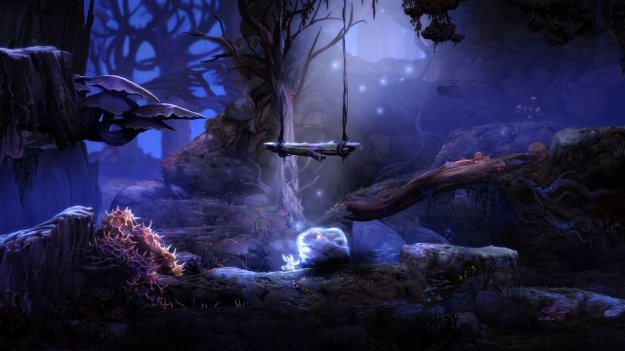 The presentation of Ori reminds one, more than anything else, of the underrated 2011 release, Outland. The bright, contrasting graphical style mixed with the action-adventure gameplay crafts together an incredibly striking image for a game world to explore. The game manages to look rather simplistic, due to its bright painted look, but so much goes on that the game ends up being a treat to watch. There is a bit of motion blur that, depending on your eyesight, can be a bit much but once I turned that off it became pure joy to watch even when the game gets intensely bleak.

More than anything else I kind of wish Ori would make up its mind. On one hand it’s a gorgeous, emotional experience with some fun and responsive platforming fun. Then on the other hand it feels like a tough as nails platforming hell type game. Both of these games are fun but with it swinging back and forth it really creates an uneven experience that does kind of get in its own way. But if you can deal with that without being driven to despair, or madness, then you’ll have a great experience waiting for you.