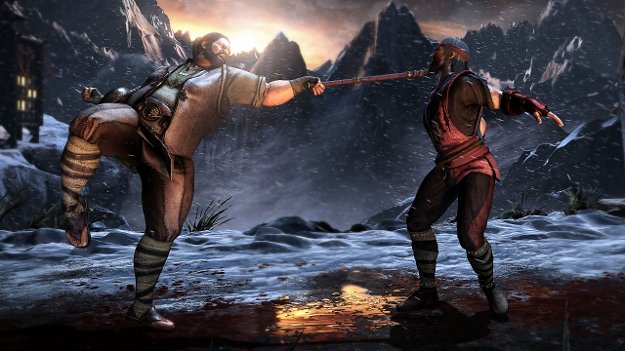 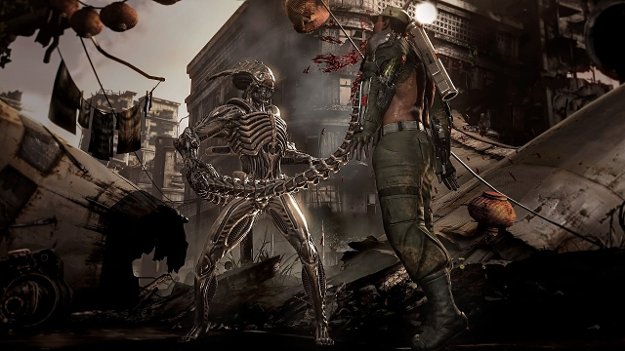 It’s time for me to be that guy – I didn’t really care for Mortal Kombat (2011). There, I said it. While the story mode was amazing and it looked great, I felt that the combat system just didn’t really hold up. There was too heavy a reliance on teleportation moves and projectiles to create openings, often on the same characters, and it all felt very repetitive to me. Some characters were legitimately well designed but overall it felt very gimmicky, utterly lacking in staying power. Mortal Kombat X manages to fix all of that and blow its predecessor out of the water in almost all respects. It’s basically an out and out improvement in pretty much every way which is really rare in this day and age of sequel happy game development.

The game picks up two years after the events of the first title. With Shao Kahn out of the way the Netherrealm attacks Earthrealm, an army of demons leading the way for Shinnok’s invasion. In a slight bit of disappointment, the big invasion that was built up at the end of MK9 is dealt with in the prologue. However, the rest of the game does take steps to address this, dealing with a power struggles and manipulations in both Outworld and Earthrealm as the various sides battle each other and a third party manipulating them both. So while the huge war mostly happens off-screen what we get instead is a bit more of a political / espionage type battle which is pretty interesting actually. Not what you expect but certainly not bad.

But with that said the story mode does feel a bit weaker than the last game. In the previous one we had a pretty long story mode that spanned three games worth of plot, taking about 10 hours or so to play casually. Here it’s about a third of that, clocking in at about three hours or so when played casually. That’s… disappointing. Even worse is that you can feel the length every moment you play the game. There’s an invasion of Earth realm! Oh wait, we just stopped that. There’s a civil war in Outworld? Oh wait, we just handled that. Wow it seems like the story is building up to… no, here’s the final boss. Crap.

It’s a whole story mode of plots that could probably fill a whole game on their own. Instead each is broken down into small, bite sized chunks to fill a single chapter, perhaps a bit into a second one, and then utterly forgotten. Thus the story feels horribly rushed, lacking in the great pace the previous entry had, to the point of feeling utterly underwhelming when you finish.

While disappointing it also has to be said that the story mode is simply a small part of the whole package when it comes to any fighting game. Thus the above, while frustrating for fans of the story, is forgivable in the grand scheme of things.

Most important to a fighting game is the core combat mechanics which are, thankfully, much improved from the previous game. The combat here is very aggressive and fast paced but it requires careful consideration of your actions. You can’t just win by goading people into leaving themselves open to a teleport then hitting them with a combo. Here you either need to be aggressive enough to get through their block or, if you’re playing specific characters, you’ll need to be able to properly punish your opponent’s aggression. Some characters, like a specific Sub-Zero combat style, are masters of the second while others fail utterly in this role.

The combat styles are another key factor in how well this game plays. Each character can pick from one of three individual combat styles. Each style has its own special moves and combo attacks attached to it that drastically change how the character is played. A great example of this can be had by examining Kitana. Normally she is unable to properly open people up for combos but she’s very good at zoning, keeping people away from her until they make a mistake that she can capitalize on. If you pick the Royal Storm combat style her defensive powers are enhanced to the point of having a projectile reflector and her fan lift attack can actually cover the entire screen. You can pick her Assassin style if you want to give her a bit more of an offensive edge via her powerful special moves. Last but most impressively is the Mournful style. Here Kitana turns into Jade – She stops using fans and uses Jade’s glaive which is odd but she also gains the staff throw and shadow kick from MK9 Jade’s arsenal.

Complimenting how much fun the combat is you have some great fatalities to top off your matches. Every character has at least two fatalities plus one stage fatality that are hilarious to watch. Some of these are massively creative such as Cassie Cage’s Selfie fatality which had me cracking up the first time someone online performed this on me. In addition, each character has five Brutalities that can be used to end matches. Instead of fatalities, which are done during the “Finish Him” prompt, these are executed by using a specific move to remove the last bit of an opponent’s health. For example, hitting someone with Kitana’s Throat Slash while holding the forward direction will remove their head entirely instead of bringing up the Finish Him prompt. It’s a neat little addition that, even if it fails, still lets you try for the fatality.

All of this gore is made more enjoyable by the fact that the game just looks so great. Each character has been rendered in painstaking detail with each variation having a slightly different costume (i.e. with or without a hat or mask). On a bigger plus side the women aren’t so stupidly over the top sexual which, ironically, makes their models much more attractive. With everything looking as good as it does it’s even more impressive to see how smoothly the game runs. Even when there’s a lot of crap happening on screen you don’t get much slowdown at all which is always impressive.

Less impressive is how the MKX has arranged its gameplay. Each mode is basically just a tower that you have to complete. But since they removed tag team mode all of these are just one on one fights which gets intensely repetitive. They have combat modifiers but most of these are intensely annoying to deal with when going against the computer. Stuff like “If you jump you lose 1/4th of your health” is a hilarious mix-up when playing against another player but against a computer who can masterfully respond to your every action it just gets obnoxious. Thus the towers can get very repetitive, very quickly. It’s a shame too since the arcade mode tower has some great ending cutscenes. With that said, if you’re the sort of person who enjoys doing one on one fights repeatedly this might not be a problem for you at all so it’s very much a mileage may vary situation.

A major plus for the game is all of the brand new characters it adds to the Mortal Kombat pantheon. Cassie Cage was one I was worried about, since I expected a Sonya reskin, but instead she’s a very interesting blend of Sonya and Johnny with unique moves thrown in. D’vorah and Erron Black are both awesomely unique and fun to play. Kotal Kahn is… unique but depending on which style you use he can feel utterly worthless or seriously overpowered. My personal favorites were Ferra-Torr, Jacqui Briggs and Takeda Takahashi. Ferra-Torr is an odd but powerful character. Jacqui has some mechanical gauntlets that let her overpower foes with a very aggressive combat style. Lastly is Takeda who is just awesome, using cybernetic whips and katana’s to control the battlefield.

The version we played was Mortal Kombat XL so we had all of the DLC characters to enjoy as well. Jason Vorhees, the Predator, Leatherface and the Xenomorph are all interesting but ultimately not that much fun to play. Goro on the other hand is a real treat with an aggressive, overpowering combat style. Tremor finally returns with a very interesting moveset and Tanya feels a bit overpowered but requires a good bit of skill to use. 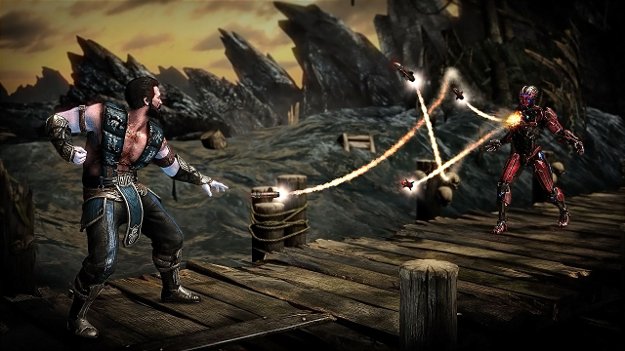 Triborg on the other hand is a disappointment. Choosing him you can pick either one of the three last game’s cyborg warriors, or Cyborg Smoke, but you are stuck with that style. I initially thought he’d be able to swap but no, it’s just all four characters smushed down into one character select slot. I’m still going to pretend Bo Rai Cho doesn’t exist though. Screw that guy.

From what I understand the online multiplayer was a bit of a mess when the original game launched but by the time I got my hands on it the gameplay was smooth as could be. Matchups didn’t take that long to get and if lag wasn’t an issue the game ran great. So the general fights and King of the Hill modes worked fine for me. But the Faction Mode is completely useless.

Adding some variety to the online modes makes sense. Having people earn points for their chosen team (like the Lin Kuei or the Brotherhood of Shadows) by playing online and offline matches. Sounds fine. But to really gain the benefits from this you need to do Faction tower matches, which are just more towers to waste time in, or the Faction boss fights. These are just a ridiculous mess. Basically the developers pick a character, set them to the highest difficulty, give them what appears to be a serious amount of armor (to prevent flinching) and then you earn points for surviving against them. That’s… that’s supposed to be fun? No. It’s frustrating, aggravating and overall pointless. Just don’t bother. Stick to online matches and leave it at that.

No, Mortal Kombat X isn’t perfect but very few games truly are. What it is though is a game that does far more right than it does wrong. You’ve got a fun fighting game with an okay story, few fighting games can claim even that. It might be a bit rough around the edges in some parts but it’s a fast paced, aggressive fighting game that’s just pure fun to play. Just avoid the powergamers and trolls online and you’re in for one of the best fighting experiences out there.