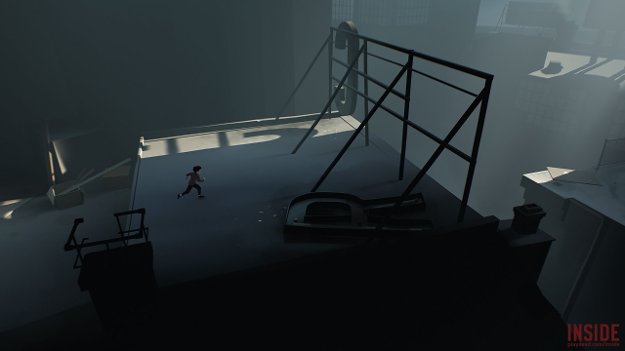 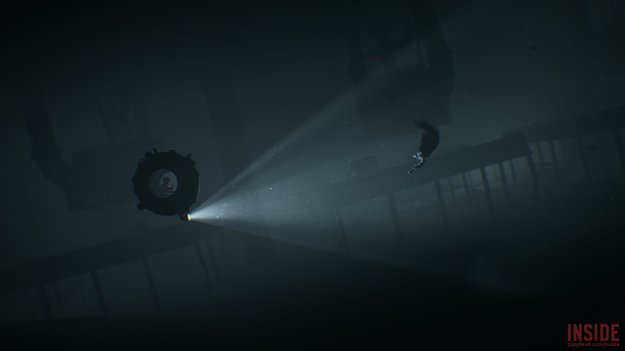 When Playdead released LIMBO, it was a shock to the downloadable games market. It was arguably one of the best games released during Xbox Live’s Summer of Arcade lineup. However that’s not to say LIMBO didn’t have its issues. While the world of it was very mysterious and left players with so many questions, sadly nothing was ever answered. Now with the release of INSIDE, Playdead has expanded its sense of wonderment with a title, however if you think they learned their lesson about delivering answers to players, you will be mistaken.

INSIDE’s puzzles are quite unique. The game’s use of color gives you a very good indication of what needs to be interacted with to advance ahead, however it is the game’s use of having the boy step in and out of the foreground that was quite intriguing. There were objects that I could immediately walk right past, not even having to jump over it, and then I would soon realize: “Oh, wait I think I can climb onto that.” Even moments where you think an object that comes crashing down that you think would crush the boy, he would just simply sidestep out of the way. Playdead’s use of the background that can be seamlessly transitioned into use is a great show of evolution of the developer’s puzzle mechanics. But with the use of colors and new background and foreground shifts, it does perhaps make INSIDE’s puzzles less of a challenge in comparison to LIMBO’s. I found myself breezing through the game with little stopping to try and decipher how to overcome a challenge. There was perhaps only one part in the game that left me scratching my head and caused me to actually whisper out loud: “I know I am missing something so simple.” as opposed to the times where LIMBO had me running into brick walls leaving me frustrated. I never felt defeated while playing INSIDE. 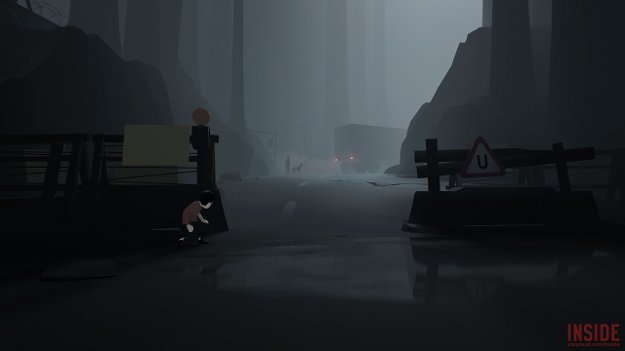 INSIDE has this feeling of dread throughout its entire playthrough. Playdead’s atmosphere has grown massively since LIMBO. It’s black and white aesthetic for the boy trying to make it out of a forest teeming with things trying to kill him worked, but INSIDE’s use of drab colors, pale yellows and red paints a bigger picture of what seems to be a very menacing world. While LIMBO was a tale of escape, INSIDE was a story of wanting to literally get inside to find out just what in the world is going on. The backgrounds of INSIDE hinted at so much. I wanted to know why people were lining up in droves. I wanted to know why guys with flashlights were searching for me and I wanted to know why the world seemed to be in such disrepair. INSIDE begged me every step of the way to keep going forward and hopefully I would find the answers I sought. Starting off as a boy lost in the woods this time around, I really wanted to know just how the world came to be.

And it was INSIDE’s use to sound design that really added to the questions I had for the world I was in. The game’s monotone uses of musical notes were used in key moments that beg the player to just stop moving forward and to just explore around. The environments are teeming with things just littered around that made you simply wonder just what happened to everything or why these megastructures were around. There were times where I just wandered into my death because I wanted to see just how far I could go and just how much I could see before I expired. And it wasn’t just the music that raised the tension. Actually given the boy sound himself added to the sense of terror I was feeling for him. At times when trying to escape from certain death, I could hear the boy’s breath become shallow and could just feel his panic in my controller. I gripped it tighter in hopes that I would hopefully escape at the last second. More amazingly, it was during a moment when the sound actually cut out that left me with an “Oh my….” moment that shocked me.  INSIDE was great when handling tension and when the lulls came; it was a relief to finally just sit back, if only for a few seconds.

However, with all the tension and questions that INSIDE builds up, it still highlights Playdead’s biggest flaw with their titles: no conclusive answers to what you were doing. I wanted to know so bad when jaw-dropping moments occurred to why they were happening, but Playdead left me with a feeling of all that I had done led to nothing. I felt that the boy was fighting against someone or something, but when the credits finally rolled, INSIDE to me felt like everything I had done was really just futile. I had beaten the game, but I didn’t really feel that I had accomplished something. I actually felt disappointed and somewhat betrayed.

INSIDE really shows what Playdead is good at doing: building a sense of mystery. Its environment wants itself to be explored and its sound design adds so much tension to what you are doing, however where Playdead falters every time so far is actually fulfilling the resolution of all the mysteries they builds up. Their games are indeed great, but if the endings from LIMBO and INSIDE keep repeating themselves in future titles, their novelties will quickly run out.