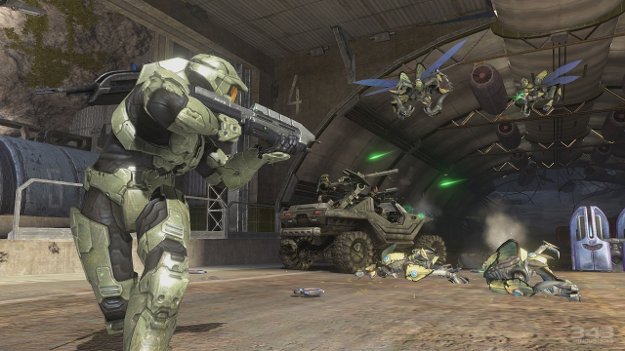 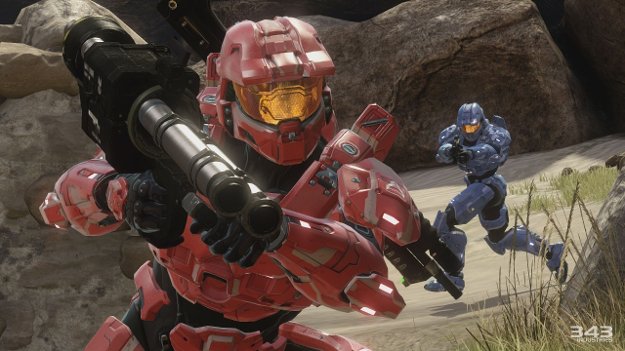 Let’s be honest with ourselves, if you’re reading this review then you’re probably already a Halo fan. There’s also a fair chance that you’ve pre-ordered it already and are staring at your calendar, trying to will the release date to come quicker with the sheer force of your mind. As such we’re not going to be reviewing the individual games per se so much as how this package represents the games and the content contained therein. It also needs to be said that I'm actually not much of a Halo fan. Well that's not correct, I've played and enjoyed each of the games but my general opinion on them trends more towards the "It's okay" side of things than the side who will look at their Halo Waypoint stats in a few years and wonder what they've done with their lives (I save those doubts for RPG's).

First and foremost, it needs to be said that 343 Industries did an amazing job with the graphics. The cutscenes in this title are beyond amazing. There’s a new wrap-around story featuring a Spartan by the name of Locke who is searching for Master Chief. Each game opens with a scene of him speaking to people such as the Arbiter, giving us an in-game rationale for this collection which is always neat. But these scenes are just utterly stunning to behold with the quality of the animations, textures, lip-synch – everything is just fantastic. 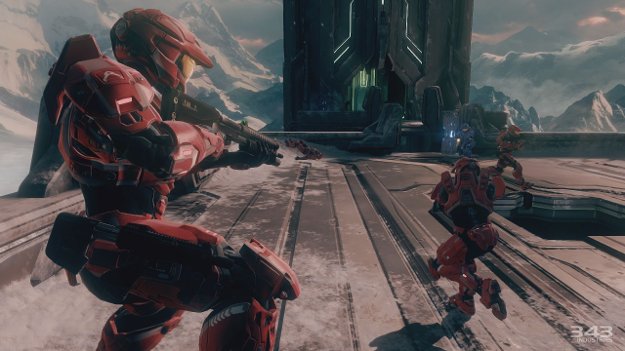 This extends to the cutscenes of Halo 2 as well since those have been brought up to the same level. In-game graphics have also been touched up considerably since the time of the original Xbox, bringing the game up to Halo 4 levels and, to this reviewer’s eye, a good bit beyond. Perhaps it’s just because the game was designed to run on a slightly stronger console that gives the game’s look a bit more punch but regardless it’s a sight to behold. The animations seem mostly untouched but that’s always been one of the series strong points so it doesn’t really stand out at all.

The counterbalance to this is the fact that Halo 2 is the only one to really get this treatment. Since Halo 1 had its Anniversary re-release recently and Halo 4 happened only a short while ago it seems like the developers decided that these two games looked fine as they were. The graphics seem a bit touched up, likely for the increased resolutions, but that’s about it. But the fact is that Halo CE: Anniversary Edition and Halo 4 are still really good looking games so a few tweaks are all that was needed.

Unfortunately Halo 3 just doesn’t look up to snuff because of this. If the games graphics have been touched up at all it’s really hard to tell. With Halo 1 and Halo 2 you have the option to swap between the new and retro graphics on the fly but there’s no such option for this in Halo 3 so if there’s any differences it’s hard to spot. Some lighting differences and effects are clearly being used here while textures seem to have been smoothed to enhance what’s there but it’s very minimal at best. This is incredibly disappointing since it leaves Halo 3 as a weak spot in an otherwise amazing to behold package. It's still passable mind you but it does tend to stand out quite readily when you compare the games side by side. 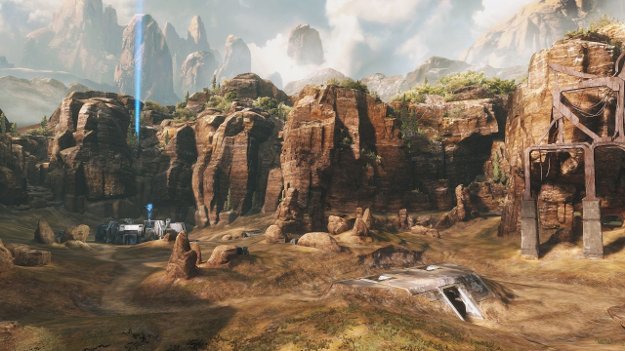 There was a chance here for 343 to make the series visuals a cohesive whole that was missed out on. In each Halo game, as they were released, things like Cortana’s appearance jumped around a bit. But here a cohesive picture could have been painted by updating Halo 3 as well to create a sense of development between the first two and Halo 4. It’s not a humongous loss but it is kind of disappointing if you were hoping all four games were going to look their best.

What’s peculiar about this package is how it embraces both the old and new in every facet, down to the gameplay engines. Each of the games seems to be running on slightly modified, updated versions of the original game engines as opposed to feeling like Halo Reach over and over again. You can even see this in the fact that the online multiplayer modes let you choose between playing Halo 2 classic or the updated Anniversary games and modes.

Some of these new game modes are an absolute hoot. Stuff like capture the flag but you have to stay in a Gungoose the whole time, that being a mongoose with a mini-gun on the front. There are also checkpoint races where one guy rides on the back of a regular mongoose while shooting a battle rifle and another checkpoint race where you fly a freaking Hornet, gunning people down with impunity while hitting those checkpoints. You can get up to sixteen people onto the map with one of those races which turn it into utter hilarity. Even Infection, a mode that already existed, got an awesome touch up – the infected appear as black skinned versions of themselves with an aura of blackness with laces of red through them. Their laser sword even turns into a glowing red blade making for an enemy that looks intimidating as hell when charging at your face. 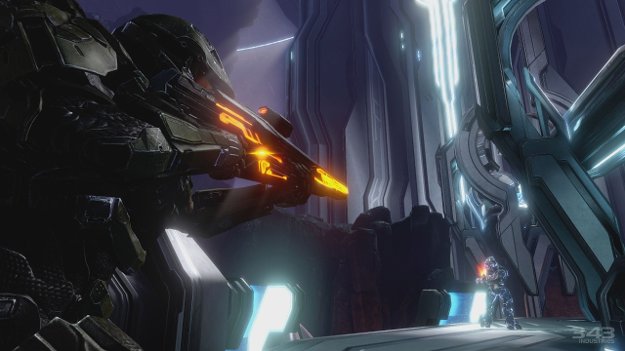 While some of the graphics might be a mixed bag the sound is just amazing. The voice work is always great, the combat sounds are spot on and the music… Haunting melodies, blood pumping battle themes – it’s all there for your aural gratification. Even better than them being there is that you can choose between the classic themes, the music you know and love, or updated themes recorded by Skywalker Sound. These newly recorded versions all sound damn good but have a greater clarity with a few mixing differences. It’s barely anything a casual fan will recognize but it gives hardcore fans a choice between the oldies but goodies and the fresh but awesome.

Another neat thing is that you can choose to adopt things like controller schemes or audio options across all of the titles if you like and the collection adapts to each game you play. So in Halo 4, you may be able to sprint by pressing in the left analog. That’s not an option in earlier games but if you choose to share control schemes across games then that button will simply not be used. It’s a bit odd, especially if you jump between games a lot, but it eventually reveals itself as quite a convenience since you don’t ever need to learn an entirely new controller layout, just the fine details of the one you’re using. 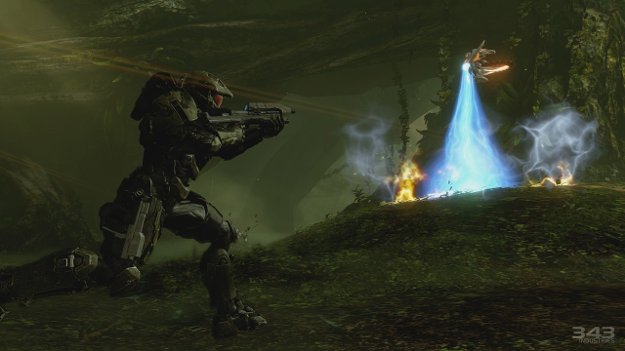 Unfortunately there are some issues here that should have been addressed in the originals that haven’t been. For instance in the first three games there’s absolutely no in-game subtitles which makes playing the game very hard for the hearing impaired. Even if your hearing is perfect it’s still difficult since volume is directional and there’s lots of noise so hearing what’s said during a heated firefight is problematic at the best of times. Then again seeing as how during the cinematic subtitles there are numerous errors, odd symbols and they’re near always out of synch (either too early or late for the lip synch). It’s distracting and aggravating if you can’t listen to it for any reason.

There’s also the issue of the very long load times. While the levels do pre-load and are thus lacking many points where the game loads, they still feel obscenely long. You can even see the game load if you push through fast enough. There were a few areas where I blew through with a rocket launcher, laser sword combo that destroyed everything in my path. Or where I used a vehicle to run like a little girl. Either way it’s kind of irksome to experience

So what’s the take away here? Well if you’re even remotely into first-person shooters then with this much content you can’t go wrong. Even if you don’t like something about a particular game, such as the online modes or maps, then you can easily swap over to another game and enjoy yourself there without feeling like you’re missing out on too much of the game you bought. If you’re even a slight bit of a Halo fan then this will be a must own since it has everything you ever loved and then some. Even if you don’t like the changes brought on by the Halo 2 update you can still play the original online modes which are just as great as it ever was. This is a must own title and you’re only doing yourself a disservice if you pass on it.