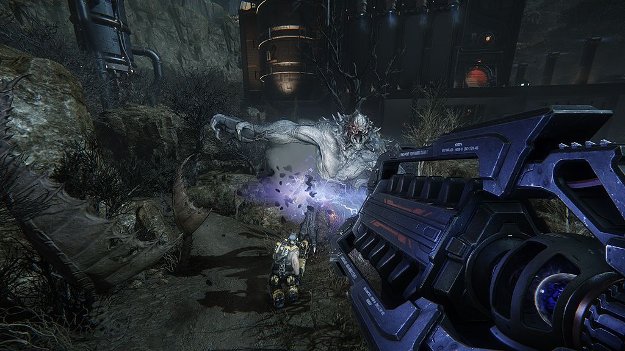 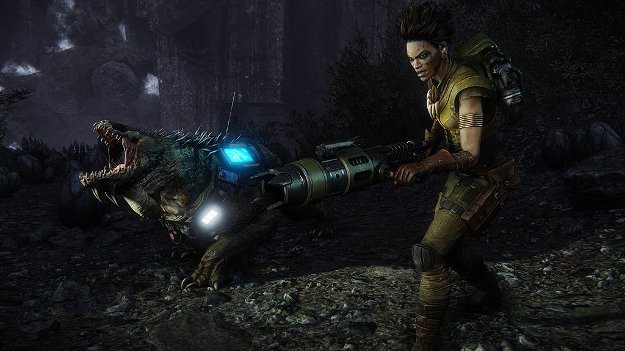 As anyone who has read my Left 4 Dead review could tell ya, I’m a huge fan of the work that Turtle Rock Studios has done. So when I heard that they were working on another four player co-op game I was incredibly excited, especially as I was no fan of the mess that was the Valve created Left 4 Dead sequel. The big problem for me with Evolve’s announcement was the fact that it was going to be a four-on-one player vs. player game. I’m not a big fan of competitive multiplayer games but I did enjoy Left 4 Dead’s PvP so I figured this might be a fun outing. Evolve doesn’t disappoint in this regard. It is a creative gaming experience that, like Left 4 Dead before it, provides a very unique gaming experience. While it has a lot of similarities to other types of games there is really no other game quite like it.

At its core, Evolve is a very simple concept. Four hunters are deployed into an area of the planet Shear to hunt down one of the monsters plaguing the planet while fending off or killing the various dangerous fauna of the world. Each hunter fills a particular role, such as an Assault hunter with huge guns or a Trapper to track and weaken the monster. This specialization means that the four hunters must work together to take down the big beastie. While those four are hunting him down the beast is hiding in the wilderness, hunting down the dangerous wildlife and feasting on it so as to grow in power. If left to its own devices it can Evolve up to twice, growing in size and power each time and becoming near impossible for the hunters to handle. 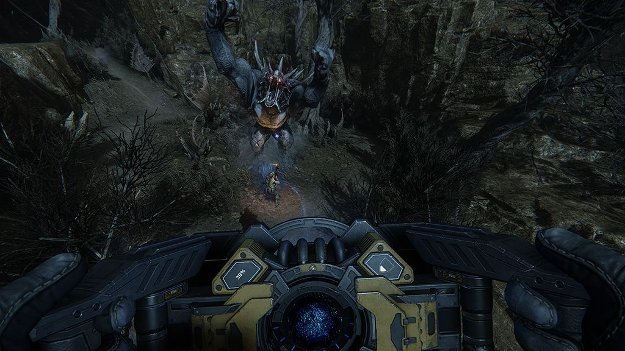 As such you really do have two teams playing entirely different games: the Hunters must find the beast and bring it down as soon as possible while the Monster must avoid the hunters until it is powerful enough to devastate them. To better perform these two roles each character (or monster) has their own abilities. For example the initial Trapper available to play has a pet monster that helps track the monster, showing its glowing footprints on the ground, and she can deploy a barrier called the Mobile Arena, trapping the monster inside a dome where the hunters can try to kill it. The default monster, the Goliath, can make massive leaps across the lands and valleys, scale walls and use leaping attacks to scatter the hunters.

This asynchronous gameplay is what simultaneously makes Evolve both insanely awesome and beyond frustrating. Since the Hunters play the game like it’s a first-person shooter it’s very easy to pick up and play. But depending on what class you play as it can be kind of tricky to learn, especially for the Support and Trapper characters that require a bit more finesse. But other than that you’ll be jumping around with a jetpack to add some maneuverability, firing two guns and using two special skills, all of which are things any shooter fan will easily adjust to. 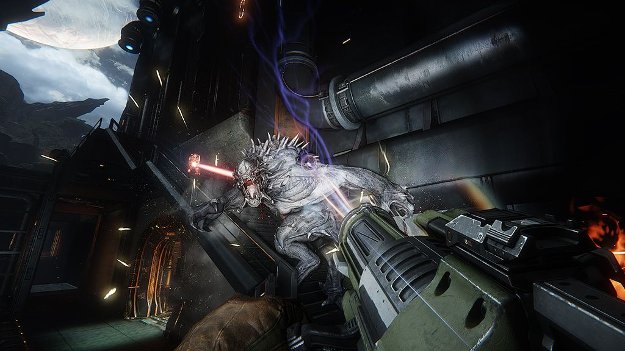 But then you try to play as the monster and it’s an entirely different game. It shifts to third person view and you have a much different movement style. Where the humans are somewhat slow moving but capable of constant, rapid bursts of movement the monster is much more deliberate. By nature they’re forced to rely on movement abilities, like the Goliath’s charge, or massive leaps to move around quickly and the recharge on these abilities is somewhat slow. As such escape requires you to mess with the Hunters, running one way and then activating your sneak mode to slink off in another direction, sending them off on a wild goose chase while you find prey to eat and grow. You’ll also have to know which of the monsters four skills work best with your playing style since you only get three points per monster level to upgrade these skills and these upgrades have a big impact on your character.

Unfortunately this variety has two major drawbacks, one of these being bigger than the other.

Firstly for some people you will likely find it impossible to play as certain classes / monsters. For example if you’re someone who likes to actually participate in the fighting then a medic is not going to be of much use. If the monster is even half decent then you’ll be healing the entire time that it’s around. This wouldn’t be a huge issue except this game truly needs all four players to work in unison or they will not succeed. So if you’re acting as a weak link you’re going to drag your team down. 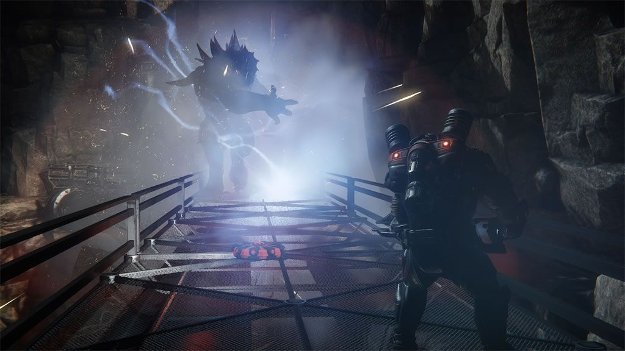 This is especially an issue for the monsters though since each monster plays so wildly different from the others. Goliath is a lumbering, powerful beast capable of quick bursts of speed. Kraken on the other hand focuses on ranged attacks, using its flight skill and close ranged abilities to fend off enemies. Lastly the Wraith is a sinuous beast that sneaks through the area, abducting individual Hunters to murder, using stealth and speed to pick them off. For me, personally, I find the Goliath nigh unplayable since I tend to get caught by the Hunters pretty easily which gets me murdered before I can even reach level 2. Conversely I excel with the Kraken, fending off Hunters effectively with even with a level 1 monster.

The second issue is the various game types. Some of these game modes can feel horrendously unfair unless you’re incredibly good at them. An example of this is the basic mode that’s been advertised: Hunt. In this mode you start as a level 1 monster and have 30 seconds to flee from the drop zone before the humans deploy. Then you must hide in the wilderness and eat your way to a larger monster so that you can either kill the Hunters or complete a secondary objective that varies by map. Depending on how good you are with the chosen monster and what map you’re on this mode can feel insanely unbalanced for one side or the other. 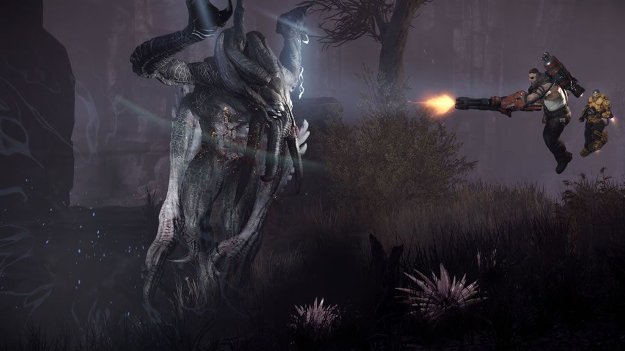 Then again I’ve heard horror stories about the monsters setting traps with level 1 monsters, using a sneak attack pounce to kill individual hunters when they split up stupidly, eventually leading to huge gunfights with the monster. But I’ve been part of missions where we Hunters basically wandered around for twenty minutes or so with no sightings of the monster and just fighting the basic wildlife while the monster snuck about and powered up. This can lead to accusations of horrible balance, unfair gameplay or bad game design but this honestly isn’t the case. This is exactly how the game is designed to go.

In my eyes the main problem with the game is Evacuation mode, what is essentially the campaign mode. While there are a number of different game modes you will invariably be forced to play modes that you’re not great at if you do Evacuation. This gives you five maps with a mix of mission objectives although the final one is always a Defend map, nearly guaranteeing that you’ll be on the fence for one of these. If you win an Evacuation map you get bonuses for the next one, possibly meaning that one failure could lead to a series of failures afterwards if the map bonus really throws someone off. This is “balanced” by having the final mission be a winner takes all scenario but after having been on the receiving end of series of missions where I won all four previous maps and then lost the Defend, only to be counted as losing the whole thing, it ends up being a bit disappointing.

Sadly this means that Evolve, while an exciting game, is just absolutely not going to be for everyone. If you’re not a fan of competitive online games you’ll want to pass on this. If you’re not willing to learn the in’s and out’s of the game’s mechanics and how to use them to your advantage then you’ll probably want to pass on this as well. It requires a whole new skill set that is more or less entirely incompatible with other video games on the market. 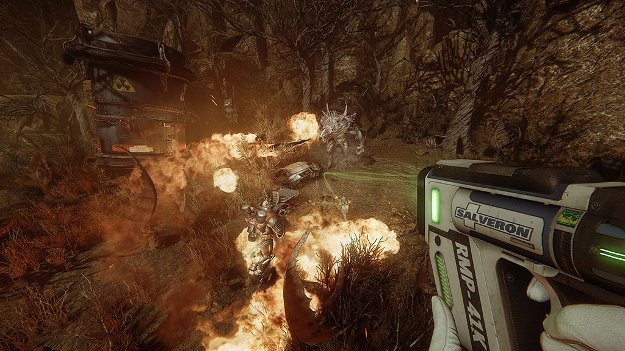 A secondary issue that may put people off is the amount of patience required to play this game. Not only do you have a whole lot of game mechanics to play you also have a massive grind ahead of you since the game forces you to grind your life away to unlock stuff. Do you want your Monster to get the most out of his leap smash? You’re going to have to use that during matches a whole lot as inflicting damage with a particular ability eventually grants these upgrades. You’ll also need to level each of your abilities up if you want to unlock other Monsters, only one is unlocked to start.

For me, starting this game up was a miserable mess of a time since I suck with Goliath and he was the only monster to choose from. This meant that I had to use something I was no good at to unlock Kraken which was when the game finally became a whole lot of fun. If you don’t like the Kraken well then prepare for misery as you have to level it up to get to the Wraith. You might think to play in the solo mode to do this easier but that’s not a great idea as a monster. The AI is insanely hard to fool so you’ll often find them even harder to deal with than decent players.

Almost all of these issues can easily be chalked up to player error, barring the grind to unlock stuff. However one thing that I cannot forgive is the absolute lack of couch co-op play. While Evolve is clearly designed with four players vs. one monster player in mind I see absolutely no reason that it couldn’t handle a couch co-op mode with both players having to play as Hunters. My fiancée and myself have put more than 400 hours into Left 4 Dead, almost all of that exclusively spent in split-screen mode, so we were very excited at the idea of being able to play together only to find out that we can’t. Some may not care about this but it felt like a major step backwards to me.

While Evolve may not be for everyone it is still a hell of a game. It looks fantastic, has great voice acting and a good variety of stuff to keep you entertained. There may be a few problems here and there but it is nowhere near the deal breaker some “Chicken Little” types have been trying to make it out to be. It’s a solid experience that holds up incredibly well to repeated playthroughs although it is possible that repetition may set in down the line.