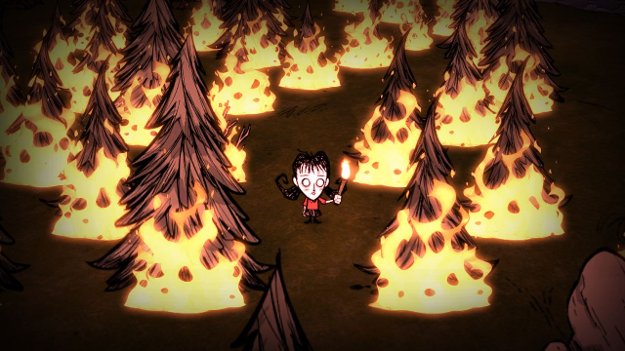 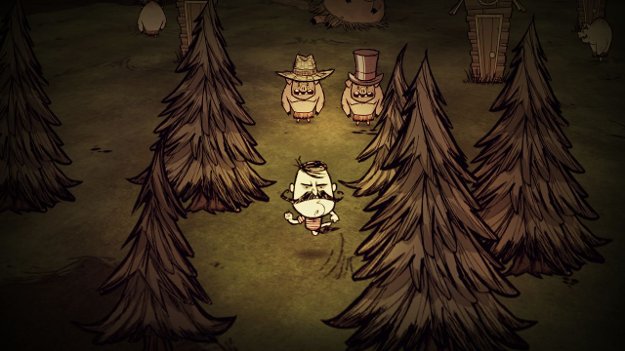 Don’t Starve is one of those few games that made me wish I was more of a PC gamer. I’d heard all this talk about it - how hard it was, how much fun it could be and how rewarding the experience was. It all just really left me wanting to play the game really badly. When it was coming to consoles I was super excited, only to be disappointed when it landed on the PlayStation 4. However when it finally came to the Xbox One I immediately knew that I had to play it now that I had my chance.

Almost immediately I was struck by the look of the game. It has a very Tim Burton-esque art style but that’s not the most striking part. No, the way the graphics are put together it almost has the look of a world crafted via construction paper, almost like the world’s freakiest diorama. This is only made worse when you see the creatures that inhabit this freakish landscape. While your main characters may look normal (for the most part) nothing else does. The giant spiders have faces and sharp, carnivorous teeth. Buffalo are replaced by something called Beefalo, a mix between a buffalo and a yak. Instead of human villagers there are pig men who hide in their homes when strangers get too close. It makes you feel like you’re exploring and surviving, or trying to anyways, in a completely alien world. 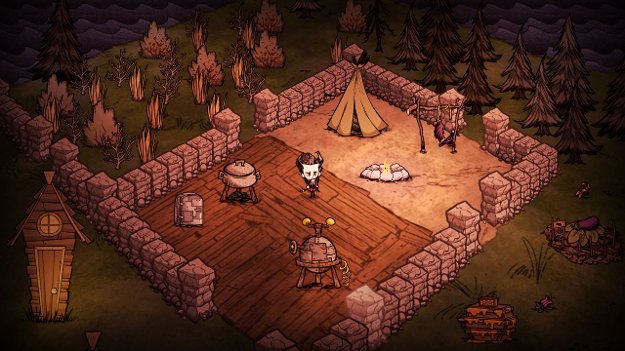 What adds to this surreal experience is the incredibly bizarre audio. The music is almost like a weird carnival, giving this incredibly creepy feel while also being very relaxing at the same time. It gives this creepy world an almost serene feeling to it. Then you’ll have your character examine something and they start to “talk” to you about what it is. I say “talk” because all of the characters actually speak via varied instruments played at different pitches. It’s very... odd and a bit unsettling when you hear a young woman speaking via a flute. Paired up with the fact that people seem to have bones in their clothes and hair it makes even the humans seem not very human.

Whereas most other rogue-like games have a strong focus on leveling up or completing quests to gain strength, Don’t Starve is a survival game. There are no levels, no skill levels or even any real boss fights. It’s all about managing your health, your sanity and your hunger levels while also keeping an eye on the weather and heat level. You can die to damage. You can die to hunger. You can freeze to death. You can die of heat stroke. That’s not even getting into the giant monsters that occasionally roam the land and should mostly just be avoided. Last but not least if you let your sanity deplete the shadows themselves will begin to attack you, disgorging various beasts that try to kill you or snuff out your camp fire.

That camp fire is incredibly important since even standing in darkness can be fatal. When it is night time your sanity drains pretty quickly just from fear. But if you stay in darkness you hear a noise. A few moments later you’ll hear it again. Then you will slowly be torn apart by some creature that lurks in the darkness. It means that venturing too far from a camp fire without a torch or other light source is basically suicide. So your days will be spent gathering resources to survive or craft new things while your nights will be spent huddled near a camp fire, crafting things and trying to avoid dealing with the horrors lurking beyond your safe zone. 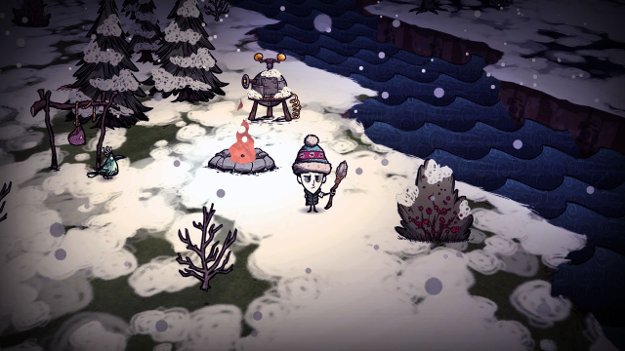 It’s interesting how the game works out. You’ll start with nothing, gather enough tools and supplies to create your own food or resource farms. Then from there you can start building even more exotic stuff. Crafting magical items, more advanced tools and so on. You don’t necessarily need these things to survive but at a certain point things can start getting really nasty. There are gigantic monsters that may start roaming the world and they will destroy you and / or your camp completely if you don’t deal with them. If you’re lucky they will pass you by but it’s never certain. Even if they do you’ll need to invest in a whole new set of equipment for the various seasons since summer and winter require entirely new sets of equipment to keep you going.

Surviving will earn you experience that is used to unlock most of the other characters. These are variable in their basic health, hunger or sanity amounts but also in their special abilities. Willow for example is a pyromaniac and will start fires if you let her sanity get low but this balances out by giving her a permanent use lighter that acts as source of light and heat when equipped. Another interesting one is Wolfgang who is apparently related to the Incredible Hulk. Shove enough food into him and he hulks out, gaining boosts to maximum health and damage. He also consumes his food faster in this form so you’ll need to carefully manage how stuffed you get him and when you hulk him out for a tough fight.

But if that isn’t enough for you then you can search out the doors that will take you to adventure mode. In this mode you have to clear five randomly chosen maps, bringing only a scant few items from each map to the next, in one run without dying. This is essentially the story mode of the game and you learn a bit more about the world you’re currently stuck in and the powers behind it. I’ve found this mode nigh unto impossible personally speaking. You really need to have a great eye for micromanaging your resources and how to use them during these missions, something I’m apparently not good enough at. My biggest problem is that managing your sanity can be difficult on these maps leading to constant attacks by the shadow monsters. Once they’re hot on your heels getting them to go away long enough to get your sanity back into the clear. Some will likely love this challenge, I do as well, but it can be pretty hardcore.

One thing you can’t accuse Don’t Starve of is a dearth of content. There is so much to do, so much to see and so much to craft that it almost boggles the mind. The game doesn’t explain a single thing to you either so you’re expected to learn all of this stuff on the fly - a truly daunting task. But once you start climbing that steep, steep hill you’ll find yourself with a very rewarding experience. While the fact that death is permanent (barring a few consumable items) can be really off putting after spending hours on one character it creates a feeling of tension and danger that few games can even hope to match.