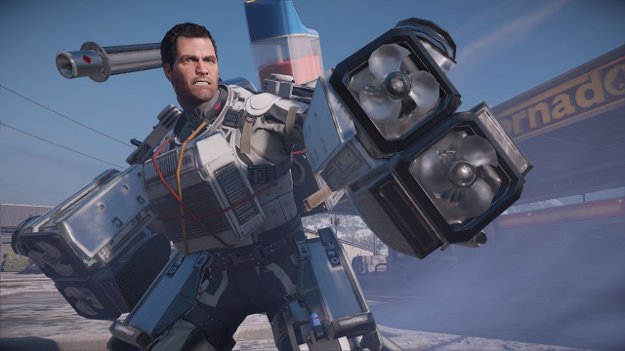 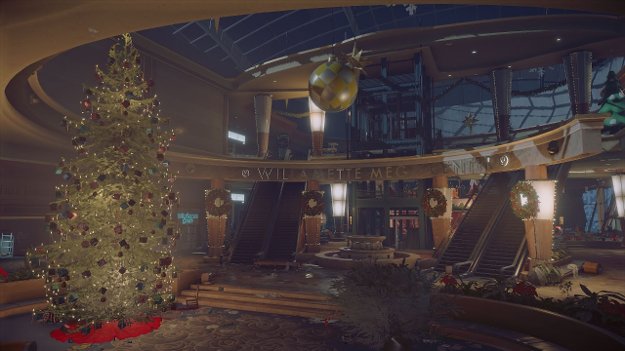 It’s interesting how a game series can fall right off the rails. Sometimes developers decide to try something new and fumble. That’s admirable in its own way even if it ends poorly. Other times developers just rehash the same game time and again in the hopes of not alienating their fans. That’s not really ideal since it means that the series will likely stagnate and die. So some middle ground needs to be trod to keep things fresh and that can’t be easy on game developers.

Even keeping that in mind Dead Rising 4 feels like a massive blunder. It’s a game that this feels less like a Dead Rising sequel and more like a movie adaptation of that series. It feels like someone with no clue about what made the games interesting decided to “improve” on the games by ripping out all of the nonsense the fans actually enjoyed like you get in your usual Hollywood adaptation. This has as much in common with the Dead Rising games as the Street Fighter movie had in common with that storied series. 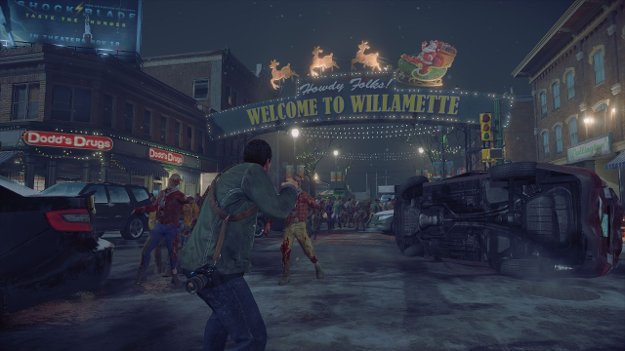 That’s a pretty damning condemnation, I’m aware. But when a game deviates this aggressively it’s hard to see it as anything else. Seriously, just look at what it did to its main character before you even get into the game itself.

In the first Dead Rising game Frank West was a bit of a bull headed jerk to begin with. He was in the town of Willamette to discover what was going on there, find his story and get the heck out of dodge. When he sees the zombies, he is terrified like any normal person would be. Upon being forced to kill people he is mortified at it. As the government sweeps in to purge the city of survivors Frank fights to survive and expose the government’s misdeeds.

When you make your way to Dead Rising 2: Case West good ol’ Frank is more than happy to help clear Chuck’s name. He shows himself to still be pretty impetuous but he’s smart enough to get himself and Chuck out of the facility before the place explodes. While saddened that he couldn’t expose what happened there he’s happy to at least be able to help Chuck clear his name.

Come Dead Rising 4 and Mr. Frank West is a swaggering ass. With a change of voice actor, he doesn’t sound like Frank. The updated graphics mean he doesn’t look a lot like Frank. When it comes time to actually deal with the horrors of Willamette once again he acts like a complete jackbag about it. Using desperate survivors to get a story? Gunning people down with a snarky quip? Leaving terrified prisoner of a private military group in a dark room by themselves? All in a day’s work for Mr. West. Honestly I routinely wanted to smash the guy in the face myself and save the covert ops soldiers the trouble.

However, the problems don’t stop there. One of the greatest strengths of the Dead Rising games were the Psychopaths. In the previous games these were some of the most memorable moments of their individual games. Fans have fond, and not so fond, memories of Adam, the murder-happy clown with the dual chainsaws, from the first game. And who doesn’t remember Slappy, the murderous mascot, as he roller skated around the mall while shooting fireballs at you.

Well the Psychopaths have been removed. Instead of dealing with powerful boss fights you will instead encounter Maniacs. These are basically just slightly stronger hostile survivors. A few of these are framed like boss fights but in the entire game only one single, optional encounter is any actual threat. The rest of the time you’re going to be dealing with enemies that take three hits instead of two to kill. Whoop-dee-doo. Even the actual boss fights are rendered stupidly easy thanks to the preponderance of food and weapons in each boss arena. Although calling them “boss fights” is really giving them too much credit seeing as how they stick you in a cybernetic power suit to battle the bosses with. 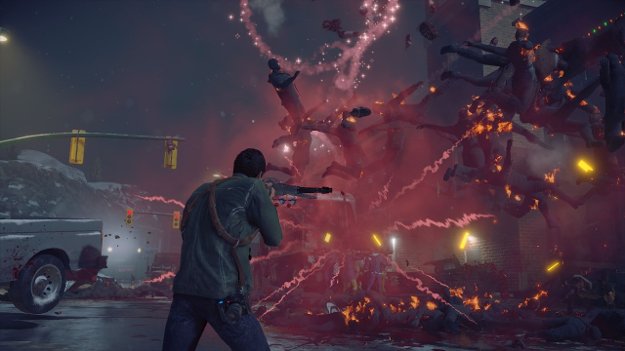 Another issue is the matter of the timer. Instead of the intelligent idea Dead Rising 3 had, to provide a more relaxed timer for those who dislike the time limit, they’ve excised it completely. Paired up with the removal of any unique survivors and the necessity to escort survivors anywhere much of the game becomes aimless. There’s no day / night cycle (removing the night time aggression of zombies), no impetus to be anywhere except for the main storyline missions (or one of the seven or so side missions) and no real feeling that this situation is important. Instead the whole destruction of Willamette is treated like a casual situation to be sauntered around as you please. It sucks any weight the story might have had right out of it.

So what does that leave? What other high points did the series have to it? Perhaps the co-op gameplay? No, that’s been removed. Instead of playing through the campaign with a friend you’ve got some crappy Left 4 Dead style missions where you try to complete some missions, fight a boss and survive the night. They’re boring, lame and very repetitive.

I realize that a lot of this has been exceedingly negative but there are a few bright spots to the game. A big one is the change to the food system. Instead of each food item healing a varied amount, the healing is standardized. So grabbing a snack, an orange juice and a medical kit gives you three items that will heal you the exact same amount. Purists may deride this but it means that you don’t have to constantly fret over grabbing a bunch of O.J. before going to a boss fight. 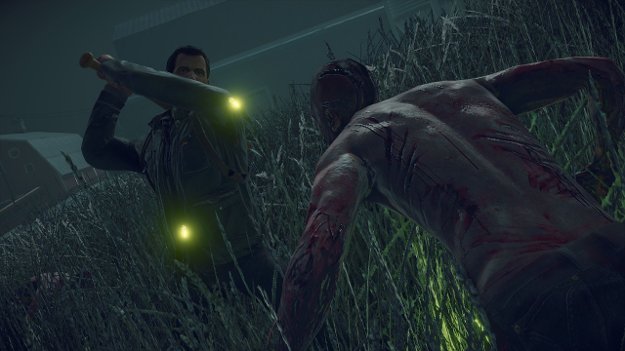 Another simplification that works is to the inventory system. Rather than having a couple inventory slots to use as you see fit you’re given three individual weapon wheels to work with. So, for example, you might have three melee weapon slots, three ranged weapon slots and three thrown weapon slots. You can use these as you see fit within their categories and they’re each mapped to their own button. So it’s very easy to start whacking at zombies with a sword, fling a Molotov cocktail at a group of zombies charging you and then pick off stragglers with your pistol. Some may grouse about how this removes a lot of the strategy to the game and to a degree it does. But it makes the combat so much smoother that it’s a completely worthwhile change.

It also can’t be claimed that Capcom Vancouver skipped on the audio / visual budget. DR4 looks absolutely amazing, graphically speaking. All of the character models are very detailed and smoothly animated. Even when there’s a horde of dozens of zombies lumbering to your position it runs smoothly and looks gorgeous. Paired up with the quality of the voice acting work, both for Frank and the rest of the cast, and you’ve got an experience that shows a lot of care was paid to making it look and sound as good as it possibly could. 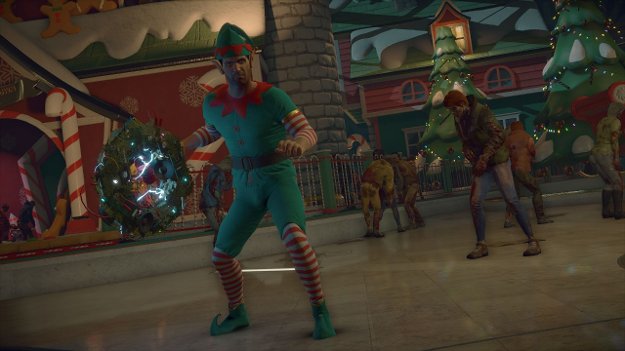 What does all of this leave us with? How does all of this come together? Very shallowly. Dead Rising 4 is a ridiculously thin experience with little to no redeeming qualities. It looks great, sounds great and plays great but has almost no real substance to justify spending time on it. There are a metric crapload of collectibles to waste your time hunting, lots of crazed survivors and paramilitary troops to cut down and plenty of zany outfits to wear. That’s about it. All in all, you have a wafer thin, ludicrously bland product that is the equivalent of watery oatmeal. It might nourish you, sure, but I hope you didn’t pay good money for it.