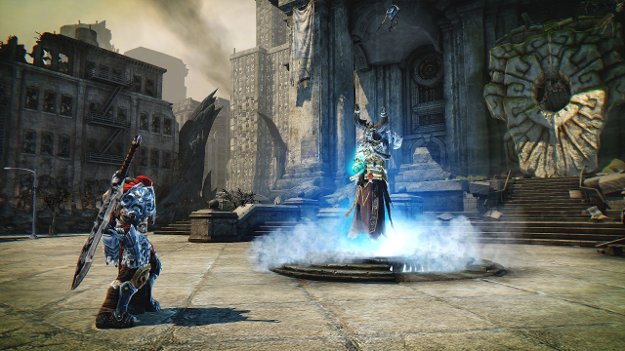 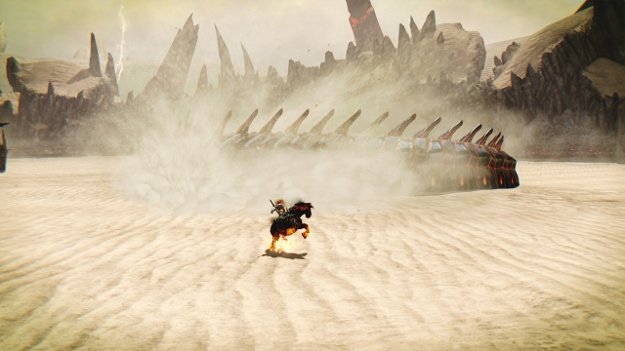 When Darksiders first rode onto the scene back in 2010, it was one of the games that helped to save THQ from the financial issues they were facing. Its first four week sales were in the ballpark of 1.2 million units and it’s not hard to see how this happened. Take the combat system of Devil May Cry and the dungeon design of The Legend of Zelda and mix them in a bowl. Season liberally with elements from a variety of games ranging from God of War all the way to Portal. Bake at 450 degrees and serve. 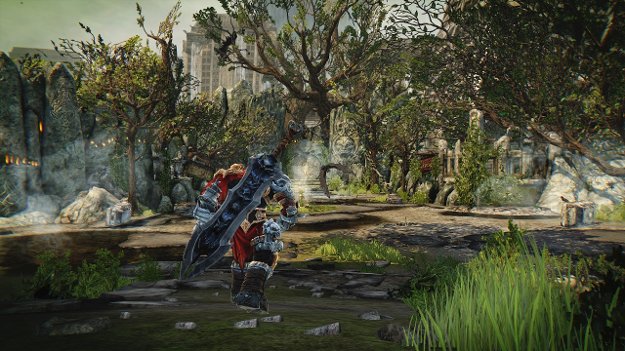 If you’re new to the Darksiders series, then a quick background overview: It makes its own spin on the apocalypse from the Book of Revelations. The Four Horsemen of the Apocalypse work for the Charred Council, a force that works to maintain the balance between heaven and hell. It opens up with your everyday city being caught in the middle of a battle between demons and angels. War finds himself summoned to Earth amidst the end times. But the Charred Council recalls him and War finds himself accused of being the one responsible for causing the apocalypse.

To clear his name, War is sent back to the Earth with a spirit sent along to hold his leash. Arriving 100 years after the fall of humanity War must navigate his way through the ruins of humanity to find the culprit and make them pay for destroying humanity. His path will take him from the fallen cities of Man to the wilderness that has become overgrown with demons, requiring him to battle hordes of demons and angels.

One thing that tends to throw people off is that while some journalists will call Darksiders a God of War clone, the game has a fairly large focus on puzzles. See you will spend a lot of time fighting. No, a huge amount of time in combat. War fights with a giant sword called Chaoseater and it can be used to rush at enemies, knock them up in the air or juggle them. But he can also use a few other weapons, like a Scythe or Gauntlet, or spells to mix up his attacks and break through enemy defenses. The combat flows very smoothly and lends itself to enjoyable bursts of destruction. You’ll find yourself flinging a car at an enemy, parrying an enemy, using an instant kill grab attack on a flyer, blitzing the enemies with a sword charge and then using your magic to cause swords to destroy all of the enemies around you. It’s smooth chaos.

As you explore War will pick up a bunch of tools he will use to fight enemies, navigate the world and, most importantly, solve puzzles. You’ll pick up a boomerang type blade for hitting switches, a teleportation device to navigate the world and a chain that lets you grapple to points in the world. These will be used to solve a wide variety of puzzles in each of the dungeons to help you find collectibles, like health increases, or simply navigate to the boss. Early on you’ll do stuff like use your boomerang to hit switches to create paths. But as you get to the later parts of the game you’ll need to teleport around to find the switches or grapple across pits to get hard to reach levers. Some of these get to be real headscratchers which is great for a game like this. Anything that gets you thinking really breaks up the monotony of juggling enemies to death. 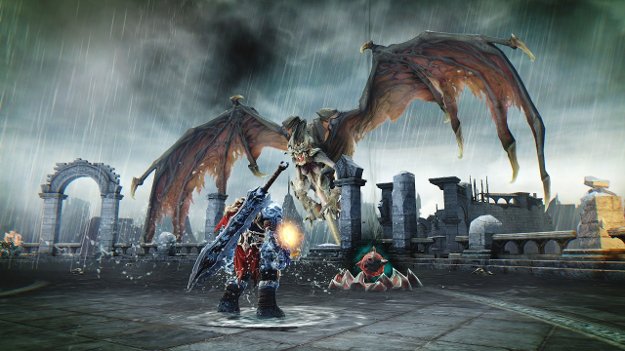 Bosses also bring up the puzzle elements to the gameplay. Very few of them will let you just straight up attack them because they’re just too dangerous. You will need to figure out what their weakness is. For some bosses you may need to find an environmental object to stun them before going in and getting a few strikes in before backing off. Other bosses will require that you dodge a wide variety of attacks before leaving themselves open to reprisal.

When Darksiders first released I was quite impressed with the graphical direction, notably the use of Joe Madueria’s designs, to be quite appealing. Technically speaking though the game had some issues. The developers seemingly knew that the game would be too taxing for the last generation consoles so they kept the graphics simple but looking good. Even then though there were engine hitches and stuttering when the action got out of hand. 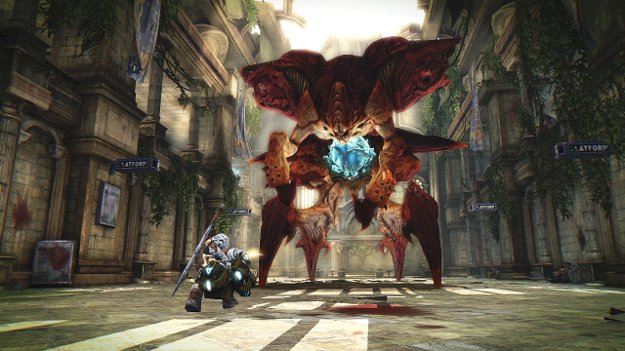 The Warmastered Edition of the game really does fix this issue. The game hasn’t been improved all that much visually but the animations are quite fluid and the game doesn’t suffer from nearly any stuttering. Other than that though you won’t really notice too many improvements. Most of the changes are done to things you’ll barely notice like the shadowing and lighting. For example, the shadows cast by a tree look far sharper in the new version compared to the last gen version. The draw distance was also improved. Beyond that though it’s not much that you’d really notice without inspecting pixels.

Oddly enough these graphical improvements don’t carry on to all aspects of the game. There are a few areas where there are some issues that didn’t exist in the original game. Notably in the first dungeon, the Twilight Cathedral, graphical artifacts will stick on the screen after they are moved off of it. So falling lava will stick to the bottom parts and sides of your screen. Orbs used to gain air via the shadow wings will appear at the bottom of your screen for several moments after being scrolled off-screen. This is weird but it isn’t a deal breaker.

A strength of Darksiders has always been the sound design. The ambient music does a lot to draw you in to the world while not being too intrusive. Sound effects are all suitable for what you would expect in the game. Most important though is the voice work. Whether it’s Liam O’Brian’s arrogant swagger as War, Mark Hamill’s pompous sneering as The Watcher or Vernon Well’s barely repressed hatred as Samael it’s all top notch. The only weak link is Uriel, voiced by Moon Bloodgood, but she’s not in enough of the game to drag it down.

Whether this is game to pick up though is a bit tough to say. If you’ve never played the Darksiders games then nabbing this and the sequel, also available on modern consoles, is a great idea as these are both the definitive versions of these games. If you’ve already played them, it is a much harder sell. The Warmastered Edition doesn’t have any DLC, new areas or anything added to it to entice people who have already played the game. Replay value was never a strong point in this series anyway. But it is nice and cheap at $19.99 so you can pick it up if you want to stack achievements / trophies or just relive the glory.