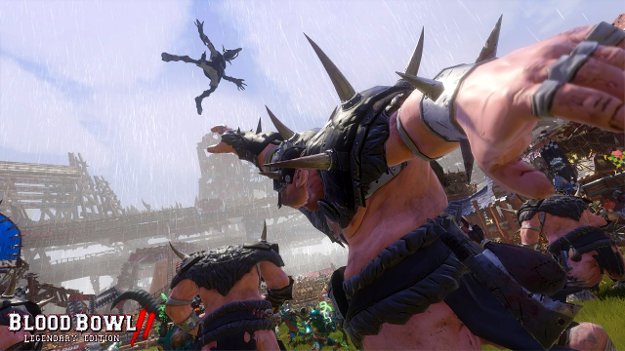 Let me tell you a story. After completing the campaign and starting up my own team I built a super agile Dark Elf team. Over about twelve hours of sometimes frustrating gameplay I grew rather attached to them. They were leveled up and specced out exactly as I wanted. This is what Blood Bowl is all about after all – creating a team and treating it as a living entity that grows and develops. That is until I got into a match with the Dwarves.

During the first three minutes of the match I managed to form a protective formation around my ball carrier while pushing forward across the pitch. My best people were keeping the dwarves from getting too close to the ball carrier, tangling them up and then disengaging to maintain formation. Until, that is, the game decided that it was time for it to win. All my dodging skills no longer mattered. My people were beaten down even when they had the advantage. Before long four of my people were dead (supposedly a very rare event) and two were injured. I managed to win but my team was crippled. I didn’t have enough money to replace the fallen so I had to retire the entire team. 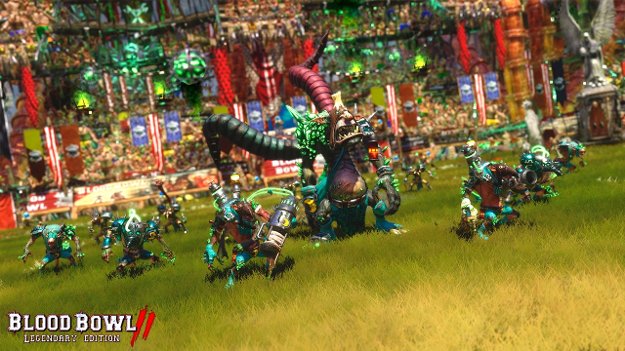 This, in a nutshell, is Blood Bowl. Hope you like random numbers ruining your life!

Blood Bowl 2: Legendary Edition is the tale of gamers attempting to overcome the random number generator and its reign of terror. You’ll normally start the game by diving into the campaign since it acts as your tutorial. While it is very amusing due to the writing and voice work you’ll end up quitting the campaign thanks to how annoyingly difficult it is. Blood Bowl is a tough game to begin with. But having your team gimped by special match rules and no team customization? Yeah, not fun.

If you’re not familiar with Blood Bowl’s rules it’s… strange. It’s basically American Football if it was a turn based board game. You’ll pass the ball, protect your ball carrier and score touchdowns as you would expect. If not for all the violence this would be a normal game. But oh boy is this violent! You don’t block your opponent so much as smash him in the face. KO’ing opponents is rewarding, injuring them even more so. 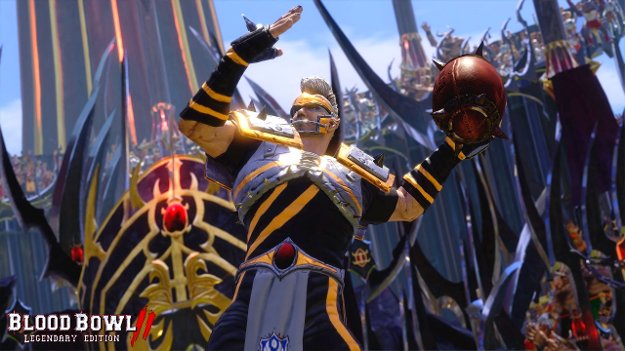 What you’ve got here is a turn based strategy football blood sport. The field is like a game board and you’ll be rolling dice for just about everything. Catching the ball, kablamming enemies upside the head or even picking it up should there be a fumble. This keeps things spicy, since if you ever fail a roll then your turn ends immediately, but this is also the source of much frustration. See, in video games with random rolls, you’ll encounter situations where nothing goes right for you while the computer dances around and does whatever it wants. This is really only a problem when going against the AI so you can minimize this frustration by playing PvP matches.

With that said, the meat of Blood Bowl has always been the leagues. These are exactly what you expect – up to twelve teams will compete in single elimination, round robin, ladder or Swiss format. These can either be simple tournaments or mega beasts like the Old-World League where up to 48 teams, broken up into 4 smaller leagues can compete. This evolving competition really lets you experience what it’s like to be a Blood Bowl manager. You can even set up leagues against the AI if you want to practice and then, when you know what you’re doing, move to PvP.

What really makes this experience authentic is just how much variety the Legendary Edition provides. There are twenty-four teams to choose from and each of them has their own little niche. For example, elves as a race are very fast and masters of handling the ball but tend to do terrible when stuck in combat. But if you choose Dark Elves you’ll find slightly sturdier elves who aren’t as fast but can literally leap over their opponents. Or you could go Wood Elf and get a super squishy team that is even faster than your average elf. The choices are there for you to customize your experience. This variety really opens doors for you. As a player, I tend to prefer teams that bash people’s faces in but I don’t really care for Orcs or Chaos. But now I’ve got two different Dwarves to choose from as well as a pair of Undead teams. Even the Lizardman team can be used to bash people’s faces in should you build them properly. Heck you can even build a mixed-race team if you want. The sky is the limit so long as you keep your team value around the 1,000-point average cost.

Even beyond choosing your race you can further customize your experience thanks to the RPG aspects to the game. Each player is an individual with a name and their own XP progression. As they level up you can give them skills that will help with making your team even better. These are randomized as well but you’ll still get helpful abilities, such as bonuses to blocking or catching the ball. Unfortunately, this means that when someone is injured you’re losing something unique. Injuries can range from keeping a player out of the next game to making them more vulnerable to further injuries. Some will permanently cripple them which can be a deal breaker. For example: should a strong but slow player have their movement or strength further penalized they may need to be retired. Worst case scenario your player gets flat out murdered and needs to be replaced immediately. 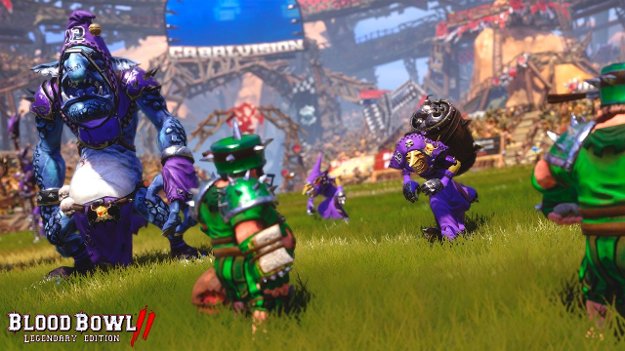 This might sound like a bad thing, since nobody likes to lose their hard work, but it really adds to the experience. Even in a pinch you’re going to be reluctant to send your weak guys to act as meat shields since they might die. You’re always going to think things through before you act and that means the game carries actual weight behind it. It’s doubly true when you’re dealing with guys that have leveled up a bunch. The counterpoint to this is that the random nature of the game means that even the best thought out approach to a game will fall apart whenever it wants. I’ve had my basher teams killed by Halflings, known as the weakest team, only for them to grab the ball and score. It doesn’t even feel like a true random generator, it feels heavily weighted towards the computer. Perhaps this is done to give the computer a fighting chance, especially since it doesn’t happen as often vs. other players but it’s intensely aggravating.

One area that falters in Blood Bowl is the team balancing aspect. The game wants you to level up and expand your team while purchasing things like cheerleaders and doctors. But when you do this the game “balances” it out by providing the other team with inducements. Basically, whenever you’re paired against a foe with a more valuable team, you are basically given free power ups and / or star players for that match. This is horse crap. Since these star players are very strong and disposable they are often hurled at your players and can be utterly devastating. This means that you’ll often fight to keep your team level low, within the 1,000-point range, even if it means handicapping your team’s potential. It’s part of the strategy of the game, sure. But it feels far too counter-intuitive, especially with the RPG aspect encouraging you to make the biggest, baddest team out there.

The last thing that aggravated me was how ponderous the game is. The user interface is a bit of a mess. Very often, when you want to do something, it is buried multiple menus deep if you can find it at all. It’s an especially big problem with the league menus. This makes finding anything intensely time consuming and confusing. Then the games themselves each take between a half hour to an hour to finish. When you’ve got a friend or chatty random to play with it isn’t so bad but otherwise it can be a bit of a slog.

It’s clear that a lot of effort went into Blood Bowl 2, the Legendary Edition even more so. Beautiful graphics, humorous voice acting and a glut of options make for a game that is even more appealing than the table top. Something has been lost in the transfer, mostly the experience of playing with close friends, as well as a number of rules tweaks. But if you don’t mind a somewhat spiteful dice roller there’s a lot of fun, and content, to be had here. Just… try not to get too attached to anyone.