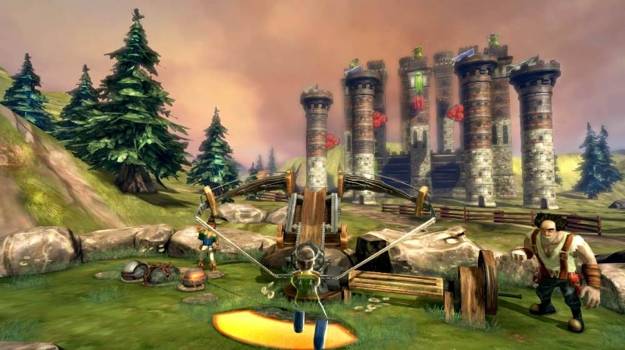 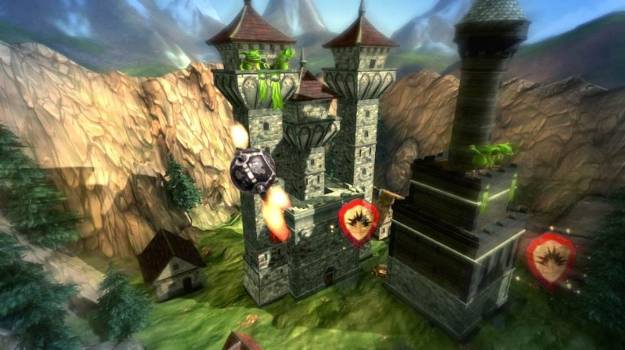 The Kinect is one of the most inspiring and disappointing gadgets in recent history. The possibilities inherent in it are incredible, but due to various cost realities and Microsoft's track record of never making quite the product they promised, there's a nagging feeling that the Kinect should be way cooler than it is.

The Wreckateer brings the capabilities and shortcomings of the Kinect to the fore like no game before it. At first glance, it seems like an unholy union of PlayStation's downloadable hit PAIN and Angry Birds' precursor Crush the Castle. However, Wreckateer has enough substance that it's more than just a rip-off.

Downloadable titles have gotten much more respect since PAIN's debut in 2005, and Wreckateer is an example of this development. The premise is that you're a new hire in a medieval demolition company. Seems this kingdom has trouble with goblin infestations, and once a castle has the little green guys, the only way to get rid of them is to raze the whole building to the ground. I'm not sure why you want to, because they are very cute, and they wear costumes. But maybe they spread disease or hump legs or something. 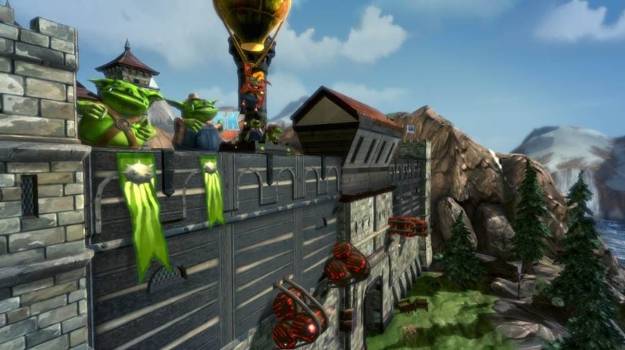 Actually, humping legs would violate the primary mandate of Wreckateer's jokes: keep them safe, safe, safe, and most importantly, safe, catering to that core Kinect market od kids and soccer moms. Why they think that women over thirty completely lose all edge to our senses of humor is beyond me.

The bland, cutesy dialogue isn't an impediment to enjoyment, however. The core gameplay mechanics are solid... for the most part. Wreckateer requires a great degree of precision in your aiming, and the Kinect doesn't have the resolution to really zero in on some of the toughest finesse shots. Furthermore, make your movements too big, and they aren't recognized. Make them too small, and the sensor misses them. Sometimes the release movement itself knocks your aim askew. It's all a reminder that the Kinect is a fantastic idea with less-than-perfect execution.

For some reason, the bomb shot is the most finicky. You have to activate it with a pose akin to a dismount by an Olympic gymnast, and that only sometimes works. The flying shot and split shot work fantastically, however, and you can do some extremely cool things with these projectiles.

All of the shots can be manipulated by fanning your hands during flight. This is far from a waggle mechanic -- you actually have to move your hands so that the on-screen gauntlets touch the projectile to get the desired effect. In fact, the game is so precise that you sometimes see the digital hiccupping from the relatively low-resolution camera inside the Kinect. You also notice some issues when you have to aim on an extreme angle, or very high as well. The positioning of the Kinect has to be perfect. In general, this game is more sensitive than a bipolar Twilight fan.

How sensitive is it? The rumble from my speakers at the volume I prefer – which I like to call "epic volume" -- frequently disrupted the sensor, and kicked it into recalibration mode. Fortunately, the recalibration happens in game, so it's annoying as opposed to catastrophic, and once I turned the sound down this issue stopped. If you're going to give this Xbox Live Arcade title a try, make sure your Kinect is positioned so it doesn't move a millimeter while you're playing.

There are hours and hours of gameplay to be had over dozens of levels, especially if you take the time to get a gold medal with each castle. The multiplier system adds a nice extra layer of strategy to the experience, since high scores are not just about which shots you take, but in what order you take them. There's a benefit to taking some extra time with each of the earlier castles to really get a feel for the different shots: the ammunition is varied, even if the levels all look very similar.

This is where Wreckateer is most certainly not a big budget title with a $60 price point, even by "casual" game standards. Yes, there are dozens of levels, but they all look essentially the same. Combined, they don't have anywhere near the depth of the original PAIN map, and the graphics look blocky on some of the zoom-ins. Furthermore, the music starts out cute, but then rapidly gets stale. Considering, however, that no one had heard of this game before a few months ago, I'll cut them some slack on these details.

While it's not a masterpiece, Wreckateer is a far better game than I thought it would be when it was announced at E3 2012. I'm impressed by the way it won me over, and it's well worth the ten bucks... I mean 800 Microsoft points... that you pay for it.