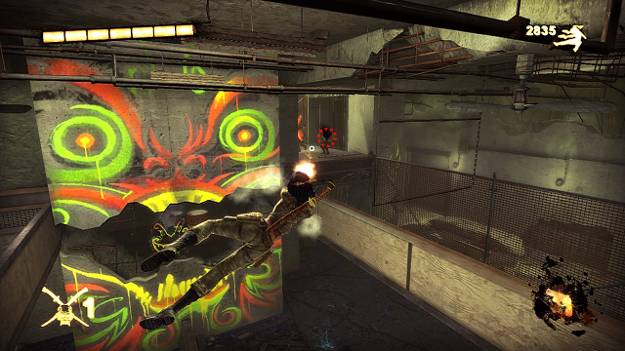 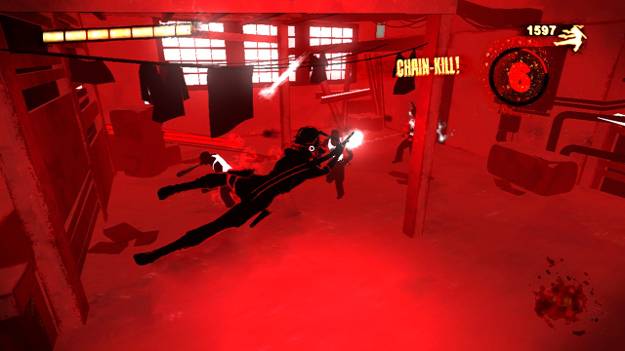 WET is a game about shooting things. And guns. More shooting, then some backflips. It's essentially the video game equivalent of an old-school Quentin Tarantino or Grindhouse film filled with, well, guns and bullets. Rubi is a Fixer, and though what that means is generally left ambiguous, it's safe to say that she's a gun for hire that performs...tasks. Tasks that may or may not be terribly legal, and the more dangerous the job, the more she gets paid. Like any good grindhouse title, it's filled with action, betrayal, explosions, over-the-top characters, and people who kick ass all over the place.

The game is about pulling off moves while shooting the bad guys. These include sliding on the floor, jumping through the air, running on walls and so forth. As you shoot during these moves, you enter a bullet time, and Rubi pulls out another gun to double your typical firing speed. The game auto-aims on of her weapons for you, firing at whatever target is nearest, and with the other gun you can manually aim at another opponent, taking down two foes (and, while riddling them with bullets, preventing them from firing at you) for extra points. You'll be in bullet time a lot, mostly because shooting while doing anything except walking activates it, and also because Rubi's typical firing speed is agonizingly slow. This combined with the fact that enemies seem to take far too many bullets to take down means bullet time is the way to go.

Points you earn through shooting enemies go towards upgrades. These can unlock new abilities for Rubi, such as being able to use an enemy for a springboard, bonus health, or the ability to fire a gun in bullet time while holding on to a ledge or spinning around a pole. They can also be used to improve the firing speed, damage, or ammo capacity of the four different weapons that you pick up as the game progresses: the shotguns, sub-machine guns, and crossbows (with exploding ammo, of course). These extra guns turn help you in battles by typically being stronger than your infinite-ammo pistols, but can run out of ammo really quickly, especially if you go a little wild with them. You find ammo scattered around the levels, but in general, running out of ammo seems to happen far too often than it should, so you're always relegated to using your pistols.

The story doesn't take too long to play through, but there is more content than just that. In addition to five monkeys to find around each level, after you beat the game a wealth of content is opened for you. There are score challenges, which are sections of the game to play through again in order to get the highest score you can. There are also Boneyard (Rubi's home) Challenges, which have you running through an obstacle course, shooting targets to get a high score. And in addition to unlocking an even tougher difficulty than Hard, the game unlocks something called Golden Gun mode, which means that both Rubi and the bad guys die a whole lot quicker. This mode alone makes for a frantic-paced, fun game to play through.

The music in this game is delightfully fitting to the game's theme, kicking in with the rest of the action. I found myself humming the tunes to myself both when they played and when they did not, and the jukebox in the main menu allows you to listen to any song played in the game, which is nice. The graphics, however, do not stand up to the same kind of quality. In fact, the graphics are noticeably dull and washed out. Generally this wouldn't be a problem in a game with a pace as quick as this, but there are a lot of close-ups and cutscenes that really seem to emphasize the lower visual quality of the models. Some of Rubi's friends, in particular, have heads with shapes that I can only describe as 'mildly disconcerting'.

Still, despite graphical foibles, WET is a pretty fun game to play. The game mechanics are fairly solid, though there are times when they can become a little repetitive or frustrating (especially on the harder difficulties). Its style is one you don't often see in a video game, and the over-the-top action is great to execute, both for points and to simply apply variation to your gaming. Yeah you can jump around and just shoot guys, but why not across the wall while you do so? Or springboard off an enemy, bounce of a wall behind you, jump back and transition into a slide across the ground, all while firing your weaponry?

So the game is fun, but ultimately flawed. It'll definitely appeal to those who like over-the-top, action-heavy titles, but the low graphical quality and somewhat repetitive nature of the titles will likely turn others away. I say give it a shot, and get your hands wet.