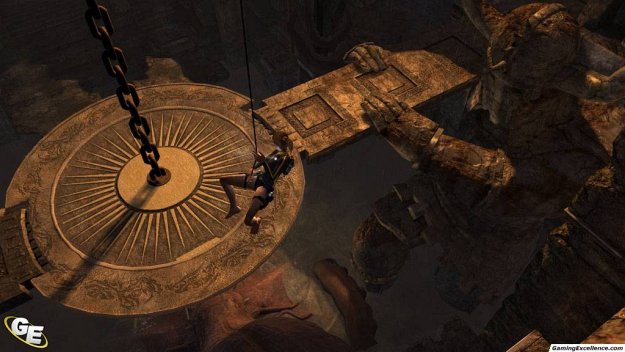 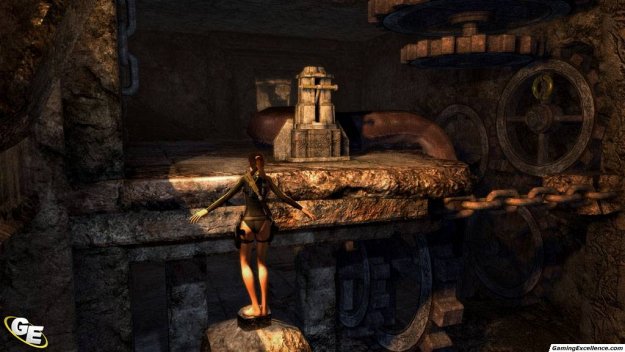 One has to wonder if there's something out there, something dark and sinister, referred to only as the Croft Curse. This nefarious evil makes any developers who work on the Tomb Raider games slowly become more obsessed with showing off Lara's polygons than making playable games. First comes one title that's a phenomenal entry in the series. After that, they even manage to pull off a rather surprising sequel that does what the original did, but a little better. But it's here that things begin to sour. Oh sure, each new game that's released does something interesting, but there's always a trade-off, and the end result is a slow decline in the quality of product.

Underworld picks up the story that started in Tomb Raider 1 / Anniversary and continued in Legend. This means that to play the games chronologically, you need Anniversary, Legend, and then Underworld. It's a bit confusing, but when you see those few elements that were stuck into TRU from Anniversary, namely a main bad guy, it isn't too important to have actually played that game. What is important is that you know about Lara's mom, Excalibur, and Amanda, since they play heavily into the story here--which basically means, go play Legend first.

However, when you're referring to this game's story, it's best to do so very loosely. Essentially, this is the same story as Legend, i.e., Lara hunting mummy dearest while pursued by Amanda, complete with Lara wielding yet another mythological weapon of mass destruction. The rest of the story ends up adding nothing to the package since it's handled so poorly. Characters are killed on a whim for "emotional impact", and baddies are introduced only to be removed from the story with little warning. None of this stuff serves a real purpose in the game. It's about as haphazard as a story gets without falling apart entirely.

Luckily, the gameplay holds up much better than the story does… for the most part. All of Lara's old moves have returned, but all have been tweaked in some fashion to make them work better. Not only do they work better, but they look great in motion. Oh sure, her hand and leg movements might not match up perfectly with the wall she's climbing, but it's a heck of a lot more effort than you see in many games. The best part of all of this is that her movements are so organic and free-flowing that you will very rarely feel like you're being artificially prevented from going somewhere. If a ledge looks like it's out of reach, maybe you need to stand on the pole you're swinging on so you can leap from there to get extra height. It might take you a few moments to figure out how to get from one place to another, and thinking is always appreciated.

What isn't appreciated are the changes that have been dumped onto the combat system. You will literally spend 75% of the game fighting off spiders and bats, mere vermin that seek to annoy you, not endanger you. Considering that they die in onehit, the game tries to make it feel more exciting by having them attack you while you're hanging from ledges. Lara has a new trick where she can hang with one hand and shoot her pistol with the other, which makes for some interesting situations. But it's still boring due to simply fighting ten bats instead of real enemies.

To counteract this, they made some of the bigger enemies bullet sponges. Did you know that it takes about fifteen pistol bullets to kill your average human being? Well apparently that's the case, so you're better off taking out Laras' assault rifle or shotgun and blowing them away. As if having almost non-stop access to the bigger guns wasn't bad enough, it seems that to balance the ridiculous nature of the enemies health bars, Lara was given a one-shot kill maneuver that is easy to pull off. This leads to a seriously erratic difficulty where you're having issues killing enemies at first, but once you get started, it's one-shot kills for everyone!

With gameplay like this, surely the rating should be a little higher, you might think. Well, that would be the case if the game wasn't so ridiculously hampered by one of the worst cameras to ever be placed in a video game. It makes it near impossible to play through the game at times, focusing on things like walls, Lara's crotch or on giving you wide angle shots when you need more precise controls. There are innumerable times where you will think you know where to go, but the camera refuses to give you a good enough angle to tell if that's indeed the case.

Ironically enough, due to the horrendous camera, it's oftentimes easier to tell which way leads to hidden treasures. How, you ask? Well, you can usually see the way that you don't need to go more easily than the way that you do need to go. It's baffling to consider, but in one of the first few stages, it was near impossible to see where I actually needed to go. When a path was finally noticed, it was promptly followed only to find some spiders and a treasure, not the way forward. This is a perplexing, and highly annoying, situation to end up in.

It seems to be that with so much attention put on the graphics and the small details, they became obsessed with showing them to you. Basically it's like having the world's most annoying guide yelling over your shoulder to "Look at this!", and "Hey, look at those hot pants she's wearing!", when all you care about is the path in front of you.

Annoying it may be, but it does let you appreciate the amount of detail that was put into the graphics. The locations look fantastic with plenty of attention paid to almost any surface that you might pass, with only the foliage usually looking a bit flat. Enemies are well detailed as well, with it being possible to see the fur on a tiger as it mauls your face. (This isn't a situation you want to be in, but it sure does look pretty!) But we can't forget all of the attention paid to the Lady Croft. Looking fantastic as ever, the biggest addition here is the ability to see dirt and water accumulate on Lara. So if she goes for a dip in a lake she will be shiny with the water for a bit, and she will be dirty after rolling around dodging enemies and platforming. Lara's movements are also about as graceful as it can get since someone finally had the bright idea to use motion capture. Her every turn, twist and spin are about as graceful as a video game character can get and it's enthralling to watch at times.

What it lacks in the reliability of the camera, Underworld makes up for in sound quality. There isn't a single hammy voice actor in the bunch, although the quality of the script makes them suffer a bit. A cheesy line is still a really cheesy line. The music doesn't fare quite as well, not being the most memorable music ever in a Tomb Raider game. It usually fits the mood, but it's all instantly forgettable, and there wasn't anything that stood out like a few of the tunes in previous titles.

But perhaps the biggest issue here is the lack of any sort of lasting play value. The game can be completed in less than seven hours if you don't find yourself getting lost constantly. Replay is killed due to how they changed the way you can replay levels, requiring you to play through the whole game and not just individual stages like Legend allowed. Perhaps most annoying is that apparently Eidos announced downloadable content exclusively for the Xbox 360 version, a bit before the game was even released. So when you wonder where the rest of the game you paid for is, its right there, waiting for you to pay yet more money for it. You lucky PlayStation 3 owners won't even be getting that so your investment is looking even shadier.

Then again, perhaps the short play-time is a blessing in disguise: it helps spare you from a really long adventure where you have to suffer with that camera. Plus, the sooner the story ends, the quicker you can stop paying attention to it. While that has to count for something, it's highly doubtful that this is what Eidos was hoping for with the title. Maybe that downloadable content will address the ridiculous camera issues, so let's be hopeful for that at least.