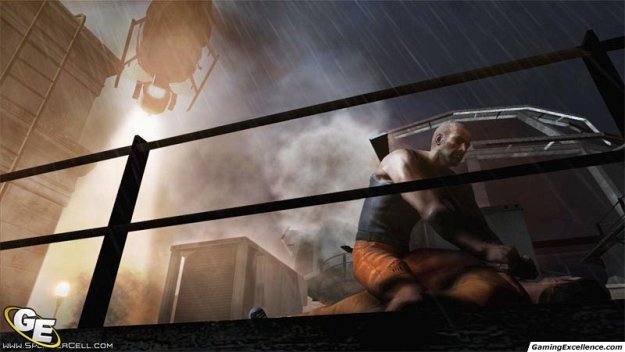 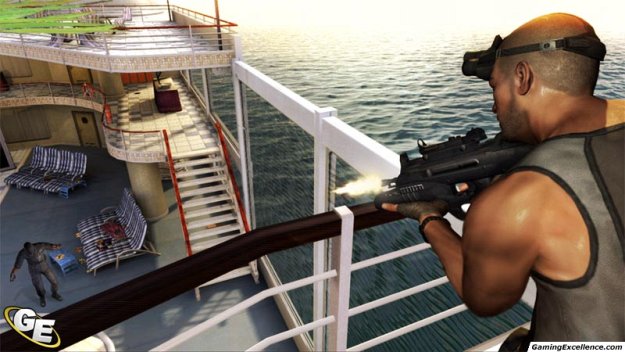 Let's get right to it shall we? The reason I loved the first Splinter Cell was because it allowed me to sneak around, take out lights, bathe in darkness and be nothing more than a shadow. Sure, the story was derivative and just an excuse to keep levels stringed together, but it worked. It was hard, it looked amazing and it was fun. It also spawned a whole sub-genre of action games. The second Splinter Cell, Pandora Tomorrow, didn't tweak too much with the single player formula (which is good) and focused more on adding an incredible multiplayer mode, something that many considered impossible for this series. At the time, this mode was fresh, intricate and deep. Chaos Theory than came along and changed things a bit; it made the single player mode a little easier and gave you the option to simply shoot your way out of certain situations. This may seem like blasphemy, but it brought many new fans to the series simply because it was a more forgiving gameplay engine. Chaos Theory featured long single player levels, a half-decent story, some cool new mechanics and gadgets and a multiplayer mode that still felt fresh. Enter the Xbox 360 and Sam's Fisher's first new next-gen outing. You'd think things would have progressed for the better, but besides amazing graphics and the unparalleled audio (and voice-work), it seems that this series has taken a large step back. While Double Agent does feature the best story we've seen so far, everything else just seems like a shadow of what it used to be.

The biggest problem with Double Agent is that it forgets what makes the series good in the first place. Double Agent is too easy, too short, too dark, too claustrophobic and too boring. Gone are the light and sound sensors, the need to use any (and all) of Sam's cool moves and gadgets, the clear goal in each level, the sense of satisfaction from a stealthy kill, the need to sneak around in general, the useful training missions (there are some, but they aren't helpful at all), and most importantly, the sense that Sam Fisher is the world biggest bad-ass. The game begins right away with a critical mission. You won't really know what you're doing, where you're going or who your partner is, but that hardly matters. What you'll note early on is that the levels are densely populated with objects and that unless you go into the options' menu and turn up the brightness, you'll be hard-pressed to know where to go since the game is predominantly dark and navigation (there's usually only one way to go) is painful. You'll also note that the A.I. in the single player mode is wonderfully dumb and also that sneaking around is never really needed. Isn't this a Splinter Cell Game? At the end of the first level, a tragic event in Sam's life sends him into despair and next thing you know, he's in jail and the NSA is using him as a double agent. What follows is the story of one man doing one company's bidding while being trusted by another. The dynamic is great and the "trust" bar at the bottom of the screen is nice (it's fun to see what each action affects overall) but in the end you'll wish Double Agent played out less like an action game and more like the traditional stealth game it should be.

Over the course of the game you'll be working for the JBA, a glorified terrorist cell, while still in contact with the NSA and Lambert. Some levels will feel like The Chronicles of Riddick, some will feel almost like an open sandbox game a la GTA, others will feel like James Bond level and a few will even resound with echos of past Splinter Cell games. The last ones, the ones that actually involve the need to sneak around, are the best of the single player offerings, but they inevitably feel watered down and never live up to the great series' potential. All of Sam's previous moves are available, but where the split jump was almost necessary in the first game, it feels like a novelty in this one. Unfortunately, this is the case with all the usual trappings of the game. In the end, the single player mode is simply an exercise in futility which will leave casual fans wondering what made the series great and and veterans scratching their heads in hopes that the next level will be as good as it should really be. This is too bad since Double Agent does indeed feature the strongest narrative of any Sam Fisher outing yet, with great characters and amazing voice-acting, but simply not the gameplay to match what we've all come to expect.

The game also features a co-op mode which many would incorrectly assume to be the ability to go through the story with a second agent, but not so. The co-op is simply a series of challenges against A.I. bots mimicking the multiplayer mode. The multiplayer mode itself, which one would assume to be the saving grace of this title, has been stripped to one mode: Spies versus Mercs. The spies will always be trying to get to designated stations in the hopes of hacking them and downloading their data to bring back to their control drones. The mercs will always be protecting the stations and taking out the spies. The spies in Double Agent are veritable spider-man clones and have the ability to leap, climb, swing, and rappel over/under and around almost any obstacle. You'd assume the mercs would have their work cut out for them, but downloading data takes forever and while doing so, spies are basically sitting ducks. The mercs on the other hand play in a first person view and have access to weapons and a lovely female voice that keeps them appraised of what's happening at all times. The mode is fun the first few times you try it, but matches tend to be overly long and dull after a while. A second or third mode would have been great, heck, Pandora Tomorrow featured more multiplayer options and it was also more fun to play.

For all its shortcomings, Double Agent does give you many incentives to play through it. On top of the Achievement Points you can unlock, Double Agent has tons of content to unlock, from skins to videos about this, that and the other thing. The game goes to great lengths to keep track of your progress and offers many multiplayer leaderboards. The interface and menus as with all Tom Clancy games are slick, but take a long time to load. There's also this nifty female voice that points out the obvious to you depending what you cursor over, but the voice is so soothing and sexy that the repetition of the comments take a long time to set in. The multiplayer menu also feels very busy like there are a million things to try out, but in the end, there's simply the same versus mode no matter whom or what you're playing against.

In the control department, Sam feels as Sam-like as ever. The controls are still elegant and the various moves you can attempt with Sam are still plentiful and well executed. Where the game seems to take a step back is in the shooting mechanic. The game has always been based on stealth and so, taking out a weapon always gave Sam that "sitting duck" feeling. The camera moves in closer and he's generally slower to control. Unfortunately, Double Agent isn't as much about stealth anymore, and so, taking out a weapon should not slow down Sam as much as it does and shouldn't make him more vulnerable now that he's armed.

Graphically, Double Agent (once you play around with the brightness and contract a little) is one of the best looking next-gen games out there. The character models, especially Sam, are incredibly well-detailed, animate realistically and feature small tell-tale imperfections (in the hair lines, scratches, blemishes) rarely seen in videogame format. The levels are well detailed and feel real, but are not designed to fit the stealth genre at all. The levels feel claustrophobic and never really lend to the open-ended "get it done the way you want" kind of mentality. When you feel like you're not sure how to accomplish a mission goal, you generally just have to proceed to where the game ushers you and generally you'll find it. Still, Double Agent is beautiful to look at and features some incredibly slick menus, cutscenes and loading screens.

In the audio department, the entire presentation seems to hang, once again, on the incomparable Michael Ironside as Sam Fisher. I don't think there is a voice actor as ingrained to a character as much as Ironside is to Fisher and that's a good thing. In fact, all the voice work in Double Agent is impeccable and unquestionably professional. The sound effects are also amazing and the audio mix is one that will truly make you appreciate your elaborate audio setup. Quite possibly the best audio presentation ever heard in a videogame thus far. It's a little disappointing that Sam doesn't say more than he does in Double Agent... it never gets old to hear him. In fact, in Splinter Cell 5, Michael Ironside could read a shopping list in an unlockable extra and I'd be quite content.

In the end, your mileage with Splinter Cell will largely depend on your expectations. As a long-standing fan of the series, this outing felt like a departure that I wasn't ready to accept. The single player mode felt short, far too easy and not as predominantly based on the stealth aspects that I'd come to love from the series. More casual fans will probably enjoy the single player mode for what it is (and the amazing story and moral choices it encompasses) and focus more on the multiplayer aspect, which I found a little bare and dull, but which some may have a blast with if they can look past the fact that there is only the one mode to play over and over. While I appreciated certain set-pieces in Double Agent and while I was happy to see and play as Sam again, I couldn't help but feel like this was an action game wrapped in a convenient Sam Fisher wrapping. As an entry in another franchise I would have probably enjoyed it more, but with the Splinter Cell name comes Splinter Cell expectations. Let's hope the series returns to its roots for Splinter Cell 5.