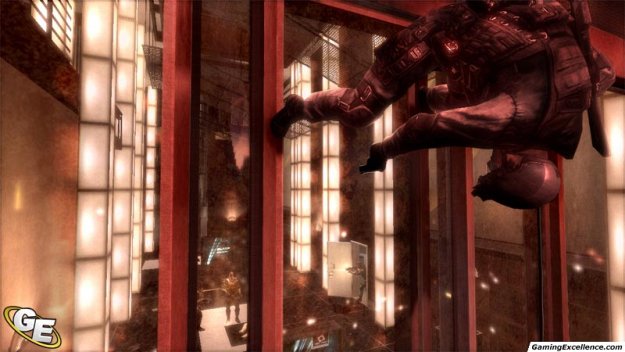 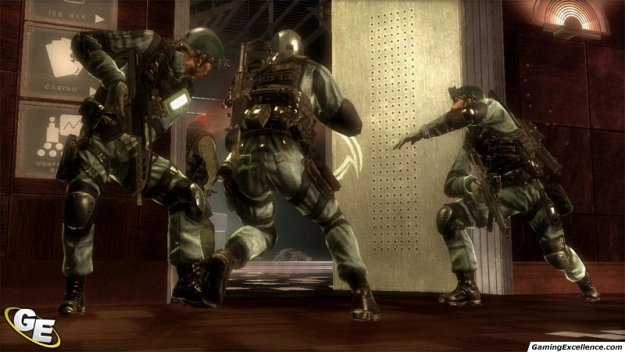 Tom Clancy has been a topmost name in innovation and quality for tactical shooters, teaming up with Ubisoft to create a successful run with Ghost Recon, Splinter Cell, and of course, Rainbow Six. When such a successful series is presented with the idea of being thrown into Las Vegas, most cringed, feeling sorry for the reviews Clancy would receive, seeming more like a cash grab than anything else (CSI anyone?). Little were we to know, Rainbow Six Vegas would be the best one to date, bringing a reinvented series to the top of the tactical wall.

Playing as Logan Keller, you are thrown into Mexico with two fellow squad members. This squad is an elite group sent by Rainbow, hot on the tracks of Mexican rebel group leader named Irena Morales. The operation turns astray, leading your team into a trap knocking the group unconsciousness by enemy explosives. You are the only one to escape, and not only does it get personal; it also gets sinful, sending you into Vegas to stop Irena and her terrorists in their tracks. The plot proceeds, but what a crime it would be for us to strip that from RSV, thus, we'll let you delve further.

Although both are going to make it huge in sales, I would never compare RSV to that of Gears of War, as they are simply very different games. Comparing such would be like comparing a James Bond film to a Van Damme film, as so, yes, both are considered to lay in the action genre, but one is done with style and the other is done with force. The intelligent tactical warfare is the star quality to RSV and can prove to be a decent step up on your foes if used correctly. Strapping on a couple grenades or a laser sight is all possible whilst rummaging through the in-game equipment boxes, or whilst sitting in the helicopter during an in game cutscene. Overall, RSV gives you the blanketed feeling that you truly are the team leader of an elite SWAT team.

Getting rather simple, RSV and Gears are both shooters that play on one aspect; cover your ass or get shot. If you don't have cover, or a decent plan, you won't survive. This doesn't mean you can't be a little aggressive, but it definitely means you can't just spray and pray, pulling a Chuck Norris and taking out multiple terrorists with a single shot. The combat system never fails; hold certain buttons to show which guns to switch between (primary, second primary and secondary arms and explosives). The right blocker triggers the ever popular lens filters (which include night vision and heat sensors). Your right trigger will shoot the casings, either aimed or not, blind fire above and beside objects, and Rambo style as well. Your gadgets will help with aiming, like laser sights and flashlights. But regardless of the weapons you are packing, your best friend is cover. Leaning against walls, doorways, and ducking behind ledges switches your view to third person perspective. You can switch your cover as much as you want, and Logan will always make sure to duck as you sidestep from large to short objects. If you do get boneheaded and get pegged several times, a hazy blur will befall you, simulating a blackout from blood loss. This on-screen effect eliminates picking up health items and more importantly strips the fictional on screen health bar we've all come to despise. This realism is continued as you rappel down fast lines and flank an enemy by storming in through the glass windows, giving team orders to help you out from another entrance.

This brings us to the superb Artificial Intelligence of your teammates; acting so realistic it's like playing alongside a couple of friends. The days of NPCs being stuck behind walls are long gone, and all in good time. New and improved teammates will also develop a sense of character along the story, each having fortes and downfalls. Of course, your Aussie friend will take the plunge in gunfire; meanwhile your Asian friend will hack the alarm systems and develop attack plans. Finding cover, alerting of possible danger, taking down primary and secondary objectives, flanking a doorway, or simply clearing the room ahead is all in a days' work. Even through an annihilated casino with tables, chips, chairs, and machines strewn across a canvas of velvet carpets and shiny well waxed floors, your teammates will find their way to take out an enemy, take cover, give cover fire or fall back and regroup. They will use the cover as well as you do, responding to your need of their spot if need be, finding another vantage point without getting themselves easily picked off. Nevertheless, there are times (say, in a short corridor) where they really don't have another place to take, and they will usually compete for the location if not commanded properly.

RSV never has any hiccups in the gameplay whilst sitting on the normal difficulty. Although offering different levels of difficulty does create a wider demographic profile of gamers, I would make an educated guess and say that about ninety-nine percent of gamers can enjoy the initial setting. If you enjoy a spotty scalp, crank this baby up to "realistic" mode and let the hair ripping begin. Stephen Harper ain't got nothin' on how Conservative you'll become. Although a tactical shooter, it doesn't slow down like you'd expect with mission set-ups like in the SOCOM series, mostly due to the aforementioned inventory boxes and suit ups whilst in the helicopter. It can get pretty hectic trying to take down a flank from both sides while your Asian teammate opens a flood gate and your other teammate is down for the count. You can run to heal him, but there could be some hardy spoonfuls of lead headed your way if you do. Stick the needle to him and he'll live, thanking you for your efforts. Of course, there is a time limit; they are still human you know. Letting a teammate die will bring you back to the last auto-save checkpoint, which are plentiful, and make for smoother play. Usually if you come to a difficult section, you will have a bit of repetition, but learning the general "choreography" of your enemies by experience usually helps the process (they won't always be in the same place). Grenades are difficult to dodge and you'll find that they get ever so popular by the eighty-percent completion mark.

Aside from the single player campaign, you can always jet over to Xbox Live and play with some friends. You'll start with a character creation, complete with gender, facial composure (including facial hair and scars), clothing and armor which offer protection at the expense of mobility, and the arms you will bear. You can then proceed with going on a "terrorist hunt" or complete some of the story line in co-op with up to four players (oddly enough, as there were three beforehand). You can also play a list of competitive game modes with up to sixteen players, including eight multiplayer game modes; Survival, Team Survival, Sharpshooter, Team Sharpshooter, Retrieval, co-op Terrorist Hunt, as well as two new modes, Attack & Defend and Co-op Campaign. Each of these modes can be customized, changing options around such as the amount of respawns each player gets and restricting certain equipment and weapons. The online play was flawless for us, and went from game to game like a dream. There is always a selection of games with different modes and there is always the possibility to create one and simply invite a lot of people. The more you play, and the more stats you'll achieve, earning you a bunch of cool clothes and sunglasses, better shoulder pads, cooler looking camo, etc. Taking one from Tony Hawk and select others, RSV can now place your face on your character with the help of Xbox Live Vision (and pick up some easy gamerscore while you're at it).

Of course the game looks incredible as well. As if you had to ask. The effects on gunfire, explosions, and your personal health are all astounding, and the textures on all surfaces, human or not, are as detailed as the programming classes Ubisoft developers probably had to endure to create such a feat. Gunfire is either real time holes, or extremely well shadowed 2D mapping, either way it looks like a dream. The gear is customizable, which makes for a great feel, and of course the animation is smooth between everything you can imagine, especially for the "open and clear" function, watching your team storm in to take the enemy to the ground with the element of surprise still lingering.

Audibly, RSV is solid. Nothing extremely new in this department and the looped music whilst paused can really become dull, lacking a proper soundtrack to really pull from. The voice acting is solid but doesn't have a very wide range of quotes from team members, which can be good and bad at the same time. Good in the sense that you know to get the hell out of the way if your Aussie counterpart yells: "It's an ambush!" Of course, in the same sense, it can get repetitive, although cutscenes and in-game storyline do help. Of course with a Tom Clancy release, all of the realistic gun sounds are intact and ready to go on every fire, and so are the impact sounds. Be sure to pick up some enemy guns if you run low on ammo, RSV is the first to do it in the series.

The series is in fact on a roll, and the sixth Rainbow Six proves it. RSV has brought the bar way up higher than a Bob Marley Concert, and it's going to be a doozy of a task to top with the next one, not mentioning the competition.