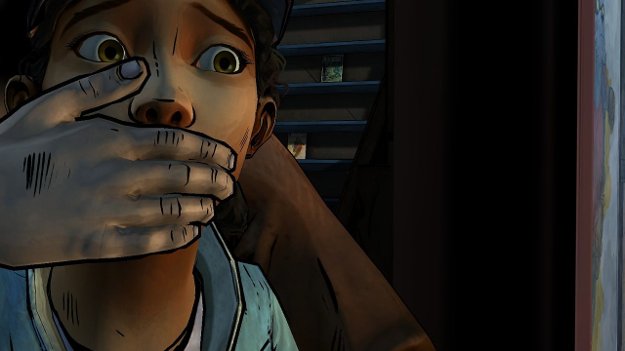 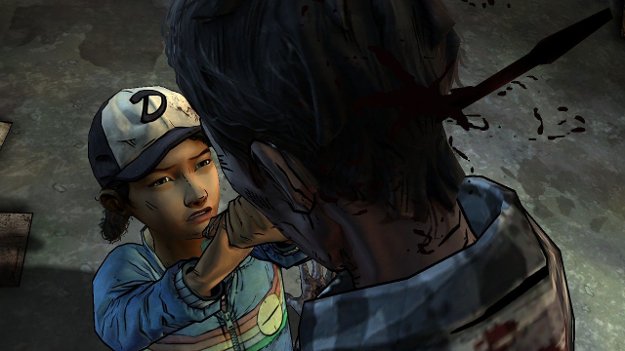 The last installment of The Walking Dead did a poor job of carrying the franchise forward, featuring our favorite little miss Clementine in some very strange situations.  The worst offender being where she was put in the line of fire because the adults around her were either too lazy or too stupid to take care of simple tasks that they should have been handling. Interestingly enough, In Harm's Way has done a bang up job of reversing that and putting The Walking Dead series back on the right track.  It gives us a bleak story where the actions of the characters mostly make sense and where Clementine actually has a chance to shine as the main character instead of looking awkward in her role.

We've finally with Carver and his group, now that Clementine and the others have been captured and brought back to stay with them.  And of course, having been brought back under duress, it's not going to take long before talk of trying to escape starts to come up.  Of course, with any kind of escape plan, desperate actions are going to have to be taken and someone's going to have to do it.  And once again, with Clementine as the main character, most of these actions fall onto her.  Unlike in the last episode, however, it actually makes much better sense that she's the character that ends up taking most of the actions in this one.  The group is confined for most of the episode in a small space. There is a way in and out that's fairly unstable and can only hold a small amount of weight without breaking. Perfect for a child and seeing as how the only other child in the group isn't anywhere near as capable or confident as Clem, we've got our winner.  Making Clem take care of everything was well handled this time and was fairly believable. I didn't want to smack the adults for putting her in the line of fire. They literally couldn't take care of it themselves this time.

And the interactions between most of the characters was fairly good as well.  Because they're in a tense situation, everyone is on edge, terrified and you can tell.  Everytime something bad was about to happen it was palpable.  You could see it coming but you were never quite sure exactly how bad it was going to be and it was actually quite interesting to see how the characters played off each other as they tried to deal with the situation they were in.  You even got expanded interaction between Clementine and Bonnie from 400 Days.  Disappointingly enough, the other 400 Days characters that showed up were simple cameos that didn't add anything to the story.  They showed up, were on the screen for two seconds each and were gone again.  It's not even really clear as to whether or not they're going to make any further appearances in the game series and with the way they behaved, frankly, I don't know if I want them to.  With the little bit we saw of them, they seemed completely on board with Carver and his supervillain act and it was really sad.  It was especially disappointing considering that when we saw them in 400 Days they seemed as if they had rich personalities waiting to be revealed. We got nothing of that from them in this installment except from Bonnie. 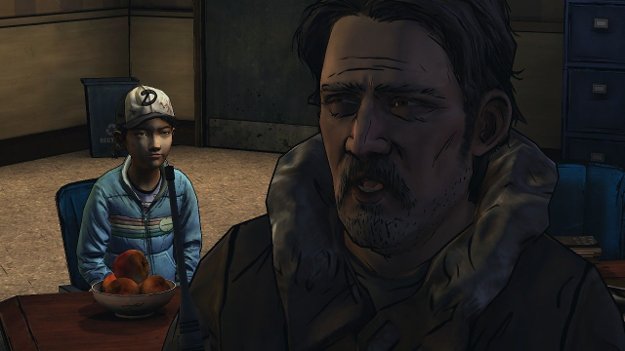 We got plenty of Carver's personality and having seen how bad of a person he was at the end of the last episode gives the players a clue as to how this new episode is going to go so it's not really revealing a whole lot to say that Carver is an evil douchebag.  However, the game veers almost on the side of him being a little too evil.  As the episode progresses, Carver engages in a series of shenanigans that make you wonder why everyone around him is being so absolutely accepting of his behavior.  He nearly stands in the middle of the compound doing an evil cackle while everyone around him twiddles their thumbs. They try to explain it away as the stress of one man trying to protect an entire group of people, but come on!  It's a little hard to believe that there are so few people in the group who are willing to see what an evil ass he is and do something about it.  Unless of course they're all just evil asses.  And if that were the case I'd find it hard to believe that their little community hasn't already torn itself apart from the inside out already.

And once again, I'm still feeling as if I'm lacking something here in the adventure element.  I got a lot more interaction in this story than in the last episode for which I was eternally grateful. I was much more involved, more engaged and generally cared so much more about what was going on.  But I'm still missing a bit of the problem solving from the first Season.  This episode, like the ones before it were still somewhat easy.  I didn't have a lot of puzzles or problems to solve, I just went from point A to point B as led by the story.  And perhaps that's the direction that they're choosing to go in with the game but I miss the puzzle solving element.  The action and high tension is great and it certainly has a place in the series, but there's something to be said for making the player have to MacGyver their way through a series of puzzles to get through and I actually enjoyed that element from Season One.

Overall though, this episode was a good step back in the right direction for The Walking Dead. The overall tone was dark and disturbing.  The story was solid and while it had people being blind towards the evil around them, it wasn't main characters putting Clementine in ridiculous situations that I as a player then had to control.  And while the story was a little mean, it was mean towards the characters in all the right ways.  It made our main character develop and grow as a character should. And yes, if that means that our poor little Clementine is becoming hardened and cynical towards life in general, well then welcome to growing up during the zombie apocalypse. Now somebody find her a crossbow for a sweet 16 present.