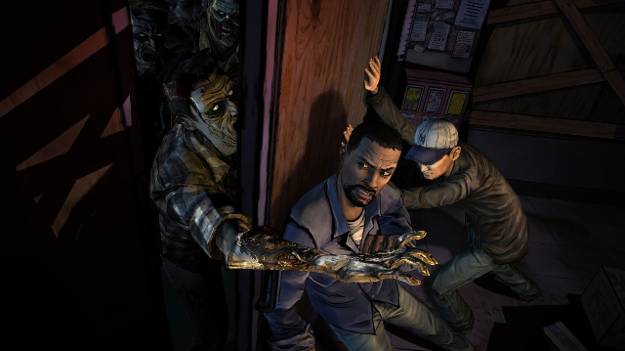 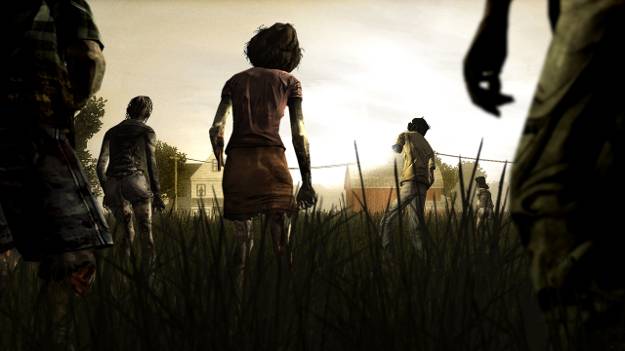 Right off the bat, I am not a reader of The Walking Dead comics, but I am an avid watcher of the TV show. It doesn't matter if you read the comics, watch the TV show or both; if you are a fan of The Walking Dead, you will want to play this game. I want to note that I know aspects of this game is based off the comic books, but I compare some of them to the TV show and I just want to say that it can be compared to either of them.

Telltale Games handles a lot of Adventure-style games and it really hits the mark with The Walking Dead Episode 1. For anybody out there who watches the TV show, you know that it isn't just a zombie shooter on the small screen. Story takes precedence here, so don't go into this expecting a game like Left for Dead. The real enjoyment comes from talking with characters met during your travels during the zombie apocalypse. Not only that, the history of your character is quite compelling as well. You play the role of Lee Everett, a man on his way to jail, but is given a "reprieve" when his cop car crashes into a walker on the highway out of Atlanta as the city is just beginning to go to ruin. As things quickly begin to escalate, tough choices are going to have to be made and they will tailor not only you but how people perceive you. Telltale tells you that choices matter here. Choose to save a kid being attacked by a zombie, people will remember that and respect you for it. Get uppity with a group leader and she'll definitely make sure you don't forget about it in the future. Telltale even lets you know when you are given a key piece of information or when you tell someone something important about yourself. Conversation is the key component in this game, so the most you'll get out of this game is when talking to others.

These adventure-style games for me were a thing of the past for me, so playing A New Day brings back a bit of nostalgia for me. This game really brings back times of me staying up until the waking hours playing King's Quest with my best friend on his PC. Adventure games like these may not be as fast-paced as other games. You'll spend a good portion walking around locations looking for things to interact with, but it shows players that whatever it is that you find, it is there for a reason. These types of games were never forgotten, but Telltale has definitely brought it to a new level and should be commended for their attention to detail with it. Playing it a second or third time can definitely breed different results with situations you think you could get through with ease. I found a photo of a family in a pharmacy and thought it was just extra fodder out there, but realized that I had to show someone the photo as proof that it was worth taking a risk.

And the risks taken in the game are a great spectacle. The Walking Dead is not shy with showcasing violence and the game has that same mentality. Jabbing an ice pick into the skull of a walker or stomping in the skull of one with your boot is gruesome. This is great thanks to the comic book style art the game has and it also goes hand and hand with the sound design. Watching Lee jam an axe into the skull of a walker is one thing, but hearing the bone and sinew crack and squish really adds to the experience. It also works for more solemn moments like walking into a bloody scene and hearing the music swell as characters are taken aback by the situation. Not only that, but the voice acting here is amazing and it makes me really care about them. There are characters I was really invested in and when I had to make tough choices whether ones got my help or not it ate a bit away at me when I couldn't make everyone happy. But it also works the opposite way as well. There were some who acted like a dick to me and it really hit me when they tore into me. Whether I liked what they said to me or not, it always struck an emotional chord with me in some way.

The Walking Dead: A New Day is a new benchmark for adventure games. Everything about it is great and what makes it all the more worthwhile is that you know that there is more of it to come. Fans of the comics and show will definitely want to play this game.