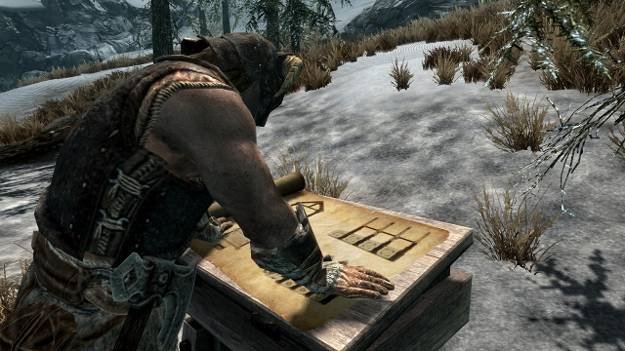 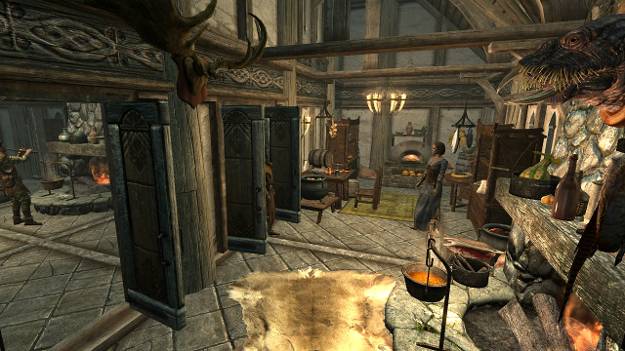 Skyrim is a fantastic game and it's one of the few games GamingExcellence has ever stood 100% behind. But that doesn't mean that there weren't some areas that could do for improvement. Some game aspects felt somewhat half-implemented and could definitely have done for being improved upon. While not distracting to the point of putting us off of the game Skyrim was focused more on the game itself and left some elements feeling kind of vestigial.

One of the main things that stood out to me when playing was the fact that the home ownership system hadn't improved all that terribly from the older Morrowind mods the fans had developed. Sure now decorating your home was easier but that's about it. There existed mods to have a spouse that were only slightly less advanced than what Skyrim gave us. While these elements aren't core to the game it's still nice to know that Bethesda is doing its best to expand some of the secondary elements to Skyrim, making the game just that much more immersive. 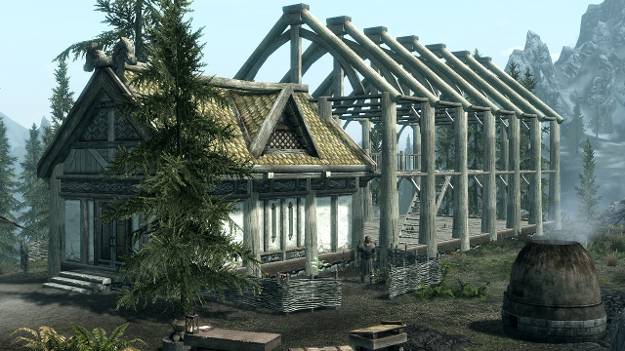 Hearthfire, the second piece of DLC, is a good bit smaller in both price and scope when compared to Dawnguard. As opposed to adding about ten hours or so of additional story and side quests Hearthfire simply adds new rewards to preexisting elements of the game. This makes it simultaneously both a nice addition to the game and something fairly familiar.

The core part of Hearthfire is similar to buying property in the base game of Skyrim – do a favor for a Jarl and he will enable you to buy property. However instead of just giving you a ready-made house that can be furnished via purchases from a local shop, here you're given a large plot of land in the nearby wilderness of Falkreath, Morthal or Dawnstar. If you aren't already friends with these figures then they will send you a letter to start the process, giving you a clear idea of where to start with this DLC. Complete the quest the Jarl assigns, drop 5,000 gold and you're now the proud owner of an anvil, a chest and a few construction items in the middle of nowhere!

Upon making your way to your new acquisition you use the craftsman's table to turn three new building materials (quarried stone, clay and sawn logs) into parts of your new home. This process will also eat up a bucketload of Iron Ingots as they're used to make nails, hinges and fittings and some Corundum Ingots for use in making locks. The game rather nicely grants you enough materials to put together the first part of your home but from there it's all up to you to mine the stone and clay or purchase the logs needed to build your dream house.

While it's possible to stick with the beginner home, a small cottage really, the purpose is to expand the home to its fullest potential. That consists of turning the small cottage into an entry way into your two floor main hall with a dining area, kitchen and upstairs bedrooms. From there you'll be able to add on three different wings to the home, each wing with a trio of different build options. For example the west wing can either have Bedrooms built, something to house your wife and children (more on that below), an Enchanters Tower or a Greenhouse. You can only have one of these on each of your houses meaning that there are three wings to the house with three different variations each. This is enough to allow you to build everything if you make all three homes but it does provide a nice bit of variety on your homes.

What makes this especially nice is that you can really customize your homes to suit your needs. If you're not planning on having your family live in the home build an Enchanters Tower to make magic items, a Trophy Room to show off your various kills and an Armor to show off your weapons and armor. Or put a Library in instead of an Armory to put all of those books you've gathered during your adventures in a huge room. For those assassins out there you can put in a Greenhouse instead of an Enchanters Tower. It might not seem like a lot of variety but it really allows you to personalize your personal home however you might like.

You can choose to make your personally built home your marital home so long as you've got one double bed built but by adding on the bedrooms wing and choosing to build children's beds and chests for them to store their things you can actually go out and adopt up to two children. Four kids are living on the streets after installing Hearthfire and they can be adopted if you choose or you can go to the Riften orphanage, kill Grelod and then adopt one of those four kids thus completing your family.

The interactions with your kids are fairly limited, only allowing you to give them gifts, play a few simplistic games with them or make them do their chores. The main purpose to this is to complete your family and make your house feel a good bit more lived in. By hiring a Bard to live in your home and assigning a follower to act as your Steward you can have up to five people living in your home along with whatever pets your kids beg to take in. It really makes your house feel occupied and busy without them really ever getting in your way.

As neat as all of this is, the house customization could really do for a bit more flexibility. Since the inside of your house always looks more or less exactly the same. While you can choose to simply not build things it'd be nice to know what and where you're building things before commiting to it. Failing that it'd be nice to have the option to choose to hide something after building it, kind of like you can choose to hide the construction tables in each part of the house. It's a simple thing but something that would really make you feel like your house is really customized how you want.

But really this is the primary purpose behind Hearthfire – to make your own personal world feel more alive. Having your house built from the ground up by your own two hands, well your own two digital hands, and then putting your family in it just makes the whole thing feel like it truly is your own. Plus all of the storage space, easy access to all of the smithing tools and even a carriage if you so choose makes this home the ultimate hub for any character. With a cheap price tag of only 400 MSP this is a worthy, if bite sized, addition to the game for any Skyrim fan.