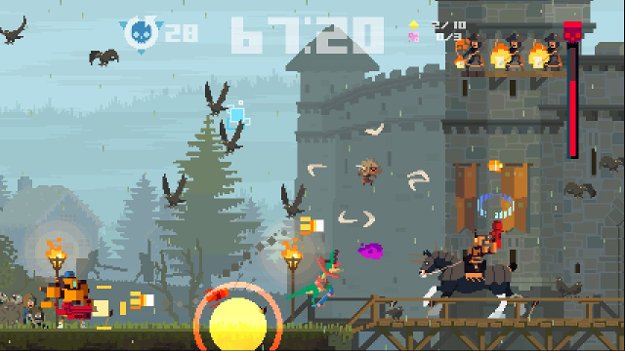 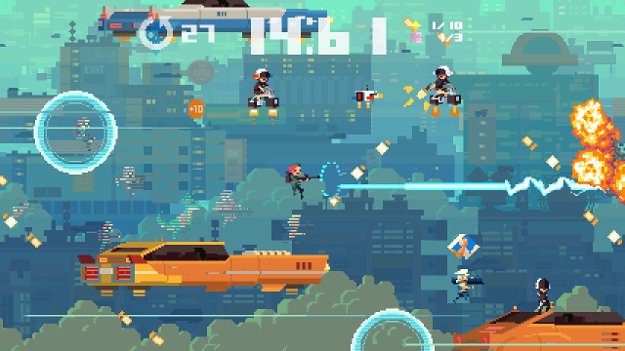 So answer me this fellow gamers: What do you do when your response to a game is a big ol’ “Meh!” Do you force yourself to play the game, trying to find enough to justify your purchase or do you just give it a rest and shelve it? When working as a game reviewer I obviously can’t just shelve a game that gives me this feeling but as a gamer I’m definitely the sort of guy to just stop playing the game until I get bored enough to give it another go.

Super Time Force is, for me, one of those games that would be shelved in short order. On the surface it sounds like a really interesting game – A group of time traveling badasses travel the time stream while battling a wanna-be super villain and saving the world over and over again from its enemies. While doing this the STF can use its time traveling abilities to make a veritable army, composed, of itself into battle in one of the most unique game mechanics ever. And yet… booooored. 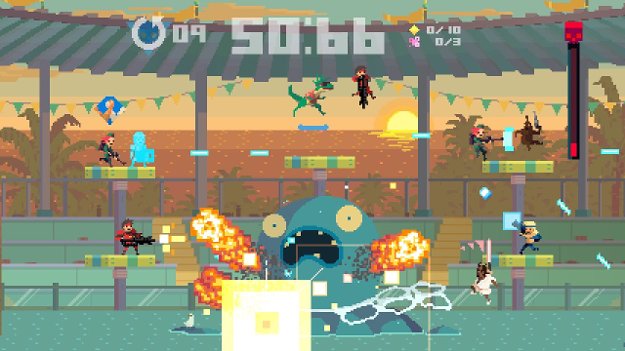 On the surface STF is a pretty simple game – it’s your average run and gun shooter, kind of like Contra, but with a few key differences. First you can either fire your gun rapid fire or you can charge up the bullets for a stronger attack. Secondly you can choose between one of three different characters, each with a different specialization: Red uses a rapid fire machine gun, charged up it fires a rapid fire three way spread. Green uses a sniper rifle, slow firing but heavily damaging, which can be charged up to fire a laser beam that punches through walls. Grey uses a shield that protects him from gunfire and that can be charged up to reflect attacks at your foes. More characters can be unlocked, including a Jedi-knock off and a Neanderthal with a boomerang fetish, but these are your starters.

But the most interesting aspect to Super Time Force is the time bending mechanic. When the character you’re controlling dies you can rewind time for a few seconds to try undoing whatever led to your death. Upon doing this you can change character or try again with the same poor schmuck but when you do so your previous run isn’t removed, it’s still going on concurrently. So if Red dies while firing his charged gun you could then spawn in as Green and start shooting the enemies while backed up by Red’s phantom image. If you manage to avert the previous characters death you can even pick up an orb they drop that adds their super attack to yours, allowing you to fire multiple special attacks at once when you charge up.

I have to admit that this is a pretty impressive thing to behold. It becomes especially awesome when fighting bosses since with some planning you can have a whole bunch of copies running around, firing their super attack all at once. There was even one particularly long, drawn out gun fight that I managed to complete in less than a minute by gathering up a few copies, placing others around the map and just firing charged shot after charged shot at the boss.

Unfortunately the games primary issue is that the design is just kind of boring. There are a few levels that introduce interesting gimmicks, like one where you defend a flying truck that’s taking you to your destination, but most of the levels are excruciatingly simplistic get from beginning to end affairs. They’re dull and it gets repetitive very quickly which isn’t a huge selling point for a fairly long video game. The best parts of the game are the boss fights which are often fairly creative affairs that absolutely require you to carefully place your time copies and gather up extra moves from the other characters to defeat them. There really needed to be more of these since they are really the only exciting parts of the game.

The odd thing is that it’s very clear that this simplistic gameplay was part of the design when they were creating STF since it’s so clearly a throwback to older games. The sound is like a more evolved version of the chiptune stuff you’d be familiar with if you grew up with the old 8-bit consoles. More importantly the incredibly retro graphics look almost like a modern day Atari video game with the obvious exception that it’s much smoother and cleaner, not to mention chaotic. The amount of chaos going on at all times is probably the most impressive part of the game if I’m being entirely honest. Enemies come at you from all sides, at all times and it just never stops. It’s immensely frustrating until you get used to it but then it can become a lot of fun to chew through all of the enemies with an impressive display of badassery.

One would think that a game like Super Time Force, with its quirky mechanics and interesting story would hold my attention but I honestly found every minute of playing the game incredibly boring. I can’t losing interest in the game to the point that this review is so late because I couldn’t play long enough to actually get a good enough grip on the game to actually review it. This is literally the first time I’ve had a game do that to me so I guess that’s something. But if the game design is more to your liking then it won’t be anywhere near as problematic for you. The game is technically good but if the demo doesn’t blow you away the game just isn’t for you.