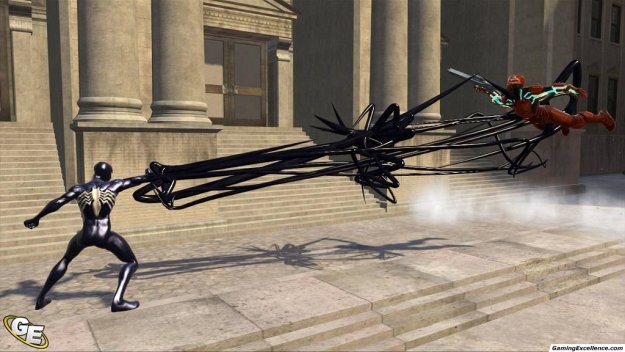 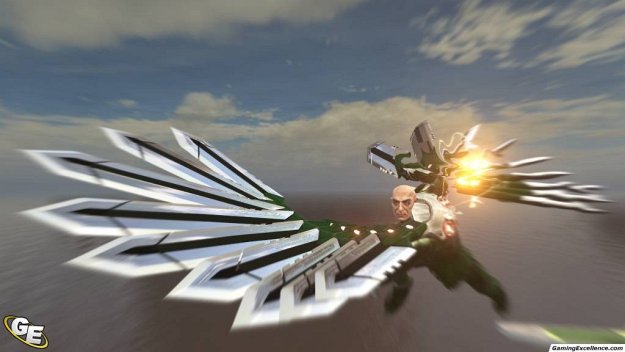 Think back to Spider-Man 2: The Video Game. Back then, it was a first of its kind. The ability to swing anywhere and everywhere in a recreated New York City and solve random crimes; climb any building at any time and leap off them and swinging with great precision was almost everything a Spider-Man fan could have wanted. Now fast-forward to today. Spider-Man: Web of Shadows has arrived and it takes you back to those days. Not only has Treyarch and Shaba Games made a game that takes you back to the feeling of that original game, but it goes beyond it and improves it.

Rather than rely on a movie plot, the story for Web of Shadows is completely original. The game's story begins with Spider-Man fighting Venom. However during the fight, part of the symbiote leaps onto Parker giving him back his black suit that we all know and love. After that pretty much all hell breaks loose. Citizens start acting like a crazed Spider-Man and start attacking you. It all seems rather strange at first, but then it becomes clear: The symbiotes have come to New York and have pretty much taken over the city. The story is quite interesting. In most occasions when I've seen the symbiote used, it seems to be over too quick and doesn't get the screen time it deserves. Here it is an integral piece of the story. The fact that it is all original content is what makes the story good. Since it is not something you've seen in the movies or even something you've read in the comic books, it means that you have no idea what will happen next. The only thing that keeps the story back a bit is that everything is not fully explained. Yes, the symbiotes have come to New York, but it's really not explained for what purpose or even how. They just show up one morning and that's all you get.

Also, thanks to the trend of games having players choose between good and evil choices, it gives a replay value to the game if you want to see what happens when Spider-Man embraces his dark side. While the symbiote does enhance Spider-Man's abilities in almost everyway, it does however make him prone to being more aggressive and do some pretty nasty things such as going for kills when fighting villains instead of just webbing them up for the police to arrest them.

Web swinging has been the same since Spider-Man 2: The Video Game, but since it is a formula that is pretty much flawless, there is really no reason for Treyarch to change it. The mechanics are still fluid and the transition between swinging and web zipping is simple. To swing, you hold the button down to sustain a web swing, while zipping only requires a quick tap of the button. It's simplistic in its design and it's still fun to use.
While swinging around is fun, it's really only a means of getting from point A to point B or just mindlessly roaming the city. The real emphasis is on the combat and rather than just focus on ground-pounding, Treyarch and Shaba Games decided to make a combat system that combines web swinging and Spider-Man's fast-moving action. When close to an enemy, a quick press of the Web Strike button will have Spider-Man attach a web line to an enemy and jet him towards them. Press a button again at the right moment and Spider-Man can perform an action based off it. The attack button has Spider-Man deliver a devastating blow to the enemy, the web shooting button attaches another web line to them and Spider-Man hurls them across the screen, while a second press of the Web Strike button has Spider-Man bounce off the opponent and can chain infinitely other Web Strikes with other nearby enemies. This is an integral part of the game. There are multiple boss fights as well as events that can not be done unless you utilize this system. It is one of the first things you learn in the game and is perhaps the main stable of your combat arsenal. It is fast, flashy, and spectacular at greater levels when pulled off perfectly.

However, don't let that take away from Spider-Man's ground pounding action. This causes another mention of the two suits that Spider-Man utilizes. Don't just think that Spider-Man's black suit is just a different character skin while all his moves are the same. The two suits make it seem that you are in control of two different Spider-Mans. While the red & blue suit Spider-Man seems more fancier with the use of his speed, agility, punches and kicks, the black suit Spider-Man seems more powerful and deals more damage and his delivery of his moves exude that power. One example of that are special moves that the suits use. One of Red & Blue Spider-Man's moves has him ramming an opponent at blinding speeds with a flurry of punches, while Black Suit Spider-Man's moves has him jumping on top of an enemy and just wailing on them while he has them pinned down.

And the combat system is quite extensive. With each fight, you gain experience and with the points you can use it to purchase additional moves for Red & Blue and Black Suit Spider-Man. The moves are broken down into separate categories. One set is utilized for ground attacks, another for aerial combos, Web Strike attacks and so on and so forth. There are also Spider-Tokens around the city that level up your health and special move meter, but it almost seems like a system not really needed. It slows down the action and web swinging when you have to land and gather up tokens. It perhaps would have been better if the Spider-Token rewards could have just been purchased from the upgrade menus like everything else in the game.

The graphics for the game are quite well rendered. At no times did I notice texture pop-ins of any such and buildings and parks look great. Also characters look good as well. When Spider-Man has his black suit equipped it almost looks like a second skin, which is how the symbiote is supposed to look. It's a life form attached to him, not just some second piece of clothing he wears. Also, the graphics set the tone of the story progression. When the game starts out the streets are bright and colorful and look pristine with a few gang members and robots roaming the streets. Half-way through, it looks a bit more dark and some things are destroyed here and there and by the ending of the game, the sky has an ominous purple hue to it, symbiote-controlled people roam the streets like rabid zombies and black and purple shaded tendrils, some grotesquely large and bulging, stick out of building and adds to the feeling that the symbiotes have begun to take over and the entire city is in a state of chaos.

One down side of technical aspect of the game is that there are several bugs in the game. There were times where a mission was completed, but there was still a civilian standing around not moving and other times where you couldn't respond to a character you were suppose to talk to in order to progress the story that warranted a reset and I did experience two complete game freezes.

Spider-Man: Web of Shadows is a great game. While the combat is pretty repetitive, it is not boring thanks to the two suits and the seamless transition between them. After your 100th Web Strike, you'll still want to do more of them. If you are a fan of Spider-Man, it deserves a pick up. If you love Black Suit Spider-Man, then your dreams have pretty much been realized.