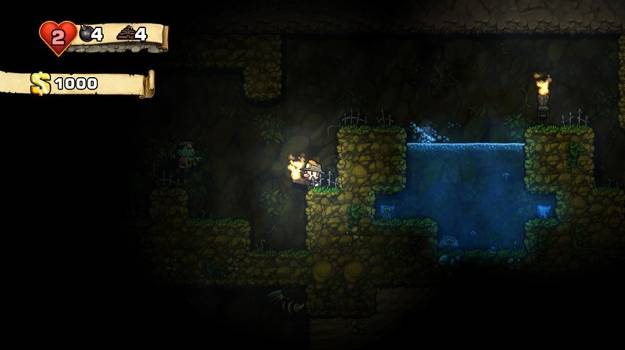 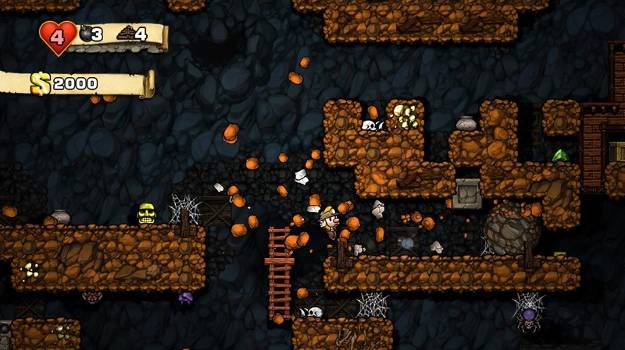 Gaming is something of an unusual pastime; it's hard to think of any other medium that can be every bit as frustrating as it is gratifying. Certainly, describing the likes of Super Meat Boy or Dark Souls to the uninitiated will result in understandable bemusement. Where's the appeal of a title determined to break you? The oddest thing of all is what these games do to us, however - the player. Regardless of constant defeat, we keep getting back up. We keep trying. The majority of the time, it's hard to even put your finger on 'why'. Despite an overabundance of frustration, sweat and tears, we dust ourselves off and leap back into the breach for frequently indescribable reasons. It's the epitome of the love-hate relationship.

Spelunky fits that bill nicely. A wicked platformer where your only goal is to reach the exit of each stage (albeit with as much treasure as you can), its simplicity is as deceptive as its cheerful retro trappings. There's no way around it; mistakes in Spelunky are punished severely enough that it borders on spiteful. Intelligence and a great deal of quick-thinking are the orders of the day here. 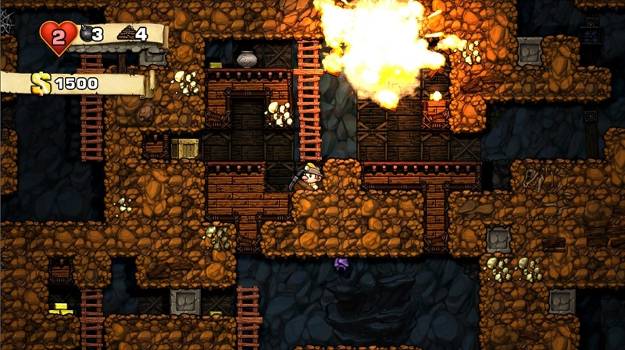 A spruced up rethink of the free-to-play PC version, this death-trap's main selling point is its randomly generated levels. No two stages are ever the same, and that constant transformation provides replayability in spades. It also means that genuine skill, care and common sense are the only allies you have when you descend into its depths; memorizing a particular route, one of the most useful tools of the platforming genre, is useless to you here. Further heightening the bar, each world on show (from mines and jungles to icy caverns) offers its own unique challenges to master.

Despite this unpredictability, Spelunky's dungeon layout never feels slapdash. Such a boon is, perhaps, even worthier of note; whilst there's the occasionally questionable placement of traps, a suspicious level of intelligence can be found in the makeup of each stage. It's clear that developer Mossmouth have thrown in some subtle rules to pull gently on Spelunky's coding strings, ensuring that - even if levels are arbitrary - they're far from haphazard. They're cruel instead.

With more than enough nastiness to go around, it'll have you furious. If you're one of those who complains that modern gaming has been 'dumbed down', Spelunky is for you. You'll often wonder if you've wasted your cash on an impossible game. It's hard. Really hard. Each death (which you can find in abundance) sends you back to the very beginning of the game. Every careless step will see you practically digging your own grave.

Yet something - that little, indefinable something - keeps enticing you back for more. And then it starts to click. Under many layers of vindictive cruelty lies a truly special platformer. It's concerned with smarts, ingenuity and a willingness to explore instead of the mandatory sharp reactions. The high levels of risk and reward may raise your blood-pressure significantly, but the thrill of stepping into the unknown offers an almost hypocritically liberating sense of freedom for a game so eager to crush you underfoot. 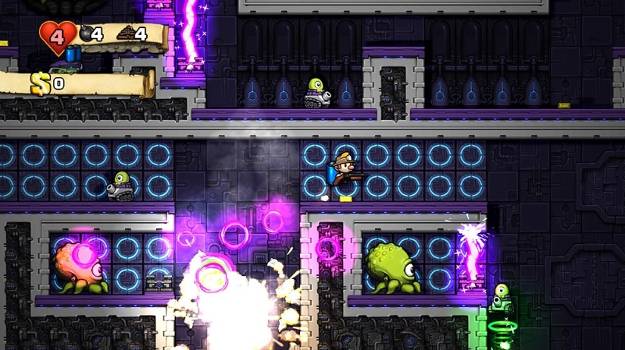 Case in point; you never know what you'll find 'on the other side', but the destructible nature of Spelunky's levels allows players to tackle them howsoever they please. Well-placed bombs can tear new routes directly through walls or floors, whilst ropes can give you access to what might at first seem like an unreachable area. Then there's the myriad goodies you can find hidden across each level, or in stores. Teleporters, jet-packs, paste to create sticky-bombs or parachutes are just some of the amusing toys this platformer has to offer.

This sense of adventure is only helped along by Spelunky's many (highly dangerous) foes, or the collection of surprises waiting in the wings. A great deal of the fun comes from dipping your toe into the water and finding out what everything does. Carrying damsels in distress to a stage's exit gifts you with some much needed health, but planting them on an alter sacrifices them for a special item. Totems are worth oodles of treasure, meanwhile, but you'll only be able to enjoy it if you can avoid the Indiana Jones-style boulder that proceeds to destroy half the level (and you, if you aren't fast enough) the moment you touch it. Spelunky is rife with these water-cooler moments, and as such it holds a genuine feeling of discovery.

If you've got three friends to call to arms, you can share it with them in local couch co-op (there's no online equivalent, sadly, only leaderboards). This leads to absolute and highly amusing chaos. Better still, it evens the odds somewhat. Each death renders the unlucky player as a ghost, able to trigger traps or blow objects around with a well-timed gust of wind. Then, if your surviving troop find a coffin, said unfortunates can be brought back to the world of the living. This means that death isn't always the end as per usual; so long as one spelunker stays alive, there's a chance of getting your deceased mates back into the game. A trouble shared is a trouble halved, as they say, and Spelunky's malevolence is - at first, anyway - a source of much hilarity when you play with others.

That is, until the initial novelty wears off. Once these rose-tinted glasses are removed, it becomes rapidly apparent just how needlessly mean Spelunky can be. This is compounded by the fact that the camera will only ever follow one player at a time. Without the intervention of split-screen, a fellow adventurer being left out of sight for too long will see them winding up six-feet under. This in itself is massively frustrating, if not totally unnecessary. Of course, we then have the ghost's near uselessness to rub salt into the wound. They can admittedly push enemies back a fraction or clear the way of certain traps, but beyond that? They have no purpose. That just isn't fun. 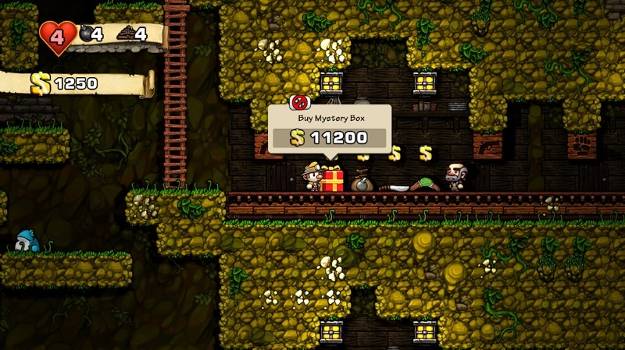 Spelunky's deathmatch mode is equally troublesome. As if battling it out with your friends wasn't enough, you have to cope with the game doing its very best to snuff you out as well. Monsters randomly drop on your head. One-hit-kill lasers line you up in their sites if you stay still for any notable period of time. It goes beyond 'challenging' and steps into the realm of 'plain nasty'.

Even with its many positives, this is what goes on to hobble the single-player experience. Without any checkpoints and considering how freely Spelunky hands out death, being sent back to the beginning regardless of your progress is an infuriatingly common occurrence. Without checkpoints, it can all come across as a highly futile effort. There are shortcuts to unlock after repeatedly giving up items or money at the end of a world, but these are still more of a nuisance to access than is strictly required.

This is a shame; Spelunky handles exceptionally well, the core concept is addictive and the feeling of discovery it engenders is electric. The fact that it's a grating experience 75% of the time almost undoes that. Personally, I wouldn't say this exasperating cruelty is good design; I'd argue that it's simply off-putting instead.

As such, Spelunky is a very difficult game to rate. It possesses a hands-down brilliant idea with superb mechanics, yet a needless brutality means that it can be more maddening than enjoyable. Because of this, I'd heartily advise any who aren't the hardest of the core to avoid it. It's not worth the flared tempers that will ensue. If you fit such a category, meanwhile, it comes highly recommended. Even if it'll sporadically have you throwing your controller at the wall, the payoff is more than worth the hefty investment; you've just got to have the perseverance to get there.