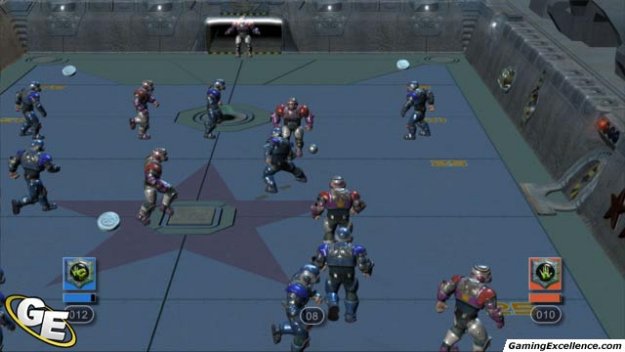 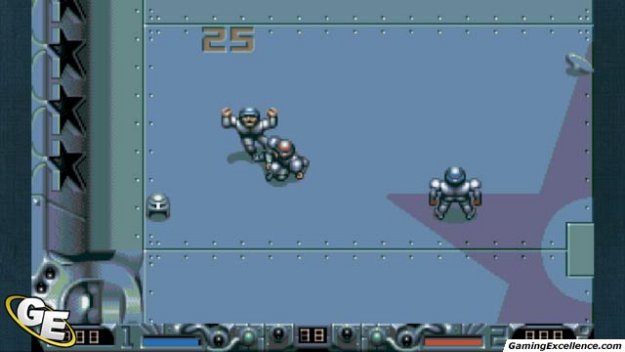 Classic Speedball was created by Bitmap Brothers for the Amiga in 1990. While the first version enjoyed some success, the sequel: Brutal Deluxe originally sold over two million units. Unsurprisingly, the game has been renewed with twice as many teams, enhanced graphics, and of course, being a XBLA title, online play.

The premise is typical of any sports game: nine players a side attempt to throw the ball through the opposing goal. Add to that, full contact, score multipliers, and additional targets along the walls for further points truly make the game sound enticing.

You can just play a quick match, or like today's sports games you can go as far as to manage your team for an entire season, and take part in 'lose one and you're out' knockout tournaments. Along with momentary player modifiers, actual cash can be picked up mid game to be spent on new players or stat upgrades for players between games.

Certainly sounds like the making of a crowded online experience, and a good way to spend an evening. The fact that no one seems to be playing it may be blamed on its technical shortcomings.

The all new 'enhanced' graphics mode boasts fully modeled 3D characters and stadiums allowing a view port tilt for a more natural view than the classic birds eye. Unfortunately, all that could have been gained by enhancing the visuals is lost because of the lack of good animation to go with it. At least in the original, when working with basic sprites for characters, a two frame animation was fine for anything from jumping, throwing, to slide tackling; but it just doesn't cut it when working with 3D characters.

There are some fun sound elements in the game, and you'll get a laugh when a vender is shouting "ice cream" from the stands. However, they by this point you'll already laughing at the over all ridiculousness of the actual gameplay.

Let's talk controls, because this is where Speedball really does fall short of any mark. You would think that Speedball would play as any other sports game; shoot, pass, change player, hit, etc. You would be wrong. Everything you could possibly want your player to do is accomplished with the 'A' button. You still use the thumb stick to move your player or direct their throw, but throwing the ball, jumping, and slide tackling is all done with this one button. As far as changing which player you are controlling, the game 'intelligently' does this for you based on who is closest to the ball. 'Intelligently' has to be in quotations because of the barrage of problems a system like this can create. For example: imagine you are frantically hammering the 'A' button making all your players slide tackle like crazy, (which is all you do in this game really), as your opponent moves in to take a shot at your goal. The game, in its infinite wisdom, switches your control to the goalie and you proceed to slide him clearly out of his net, effectively giving away a goal. It should also be noted that, although the Xbox controller allows a full 360 degrees of thumb stick control, all throws and player movements are limited to 45 degree increments.

The only thing guaranteed if you play this game is that you will get a laugh at how crazy it is. It is so fast paced, half the time you don't even realize that your player has the ball. That and the fact that the 'A' button does everything under the sun definitely makes this a button masher, with very little influence given to actual skill. If you are interested in a good violent sports game, check out Sega Soccer Slam or Super Mario Strikers. If it's more of an old school game you're looking for, find a Sega Genesis and try Mutant League Hockey or Football. All of these play as regular sports games, but have the fun element of 'anything goes'.

Classic Speedball II may have been a big success in 1991, and could even be described as Bitmap Brothers' franchise game, but players today demand far more for their gaming dollar. The poor animations, and more than anything, the lax controls, make this a game that few will play more than once.