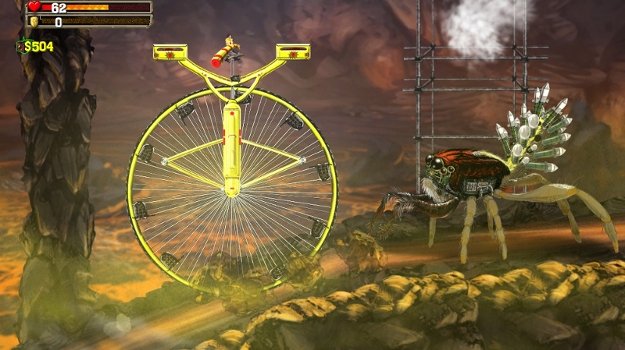 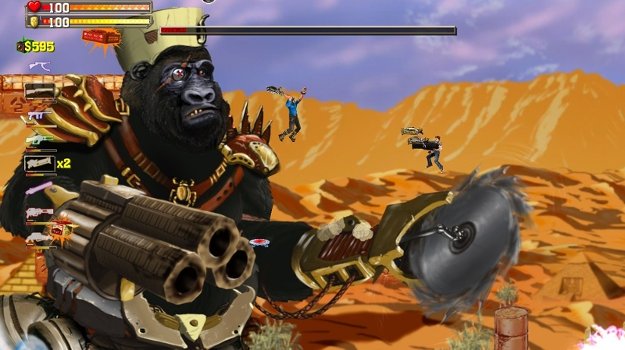 When your first instinct upon seeing the name Serious Sam in the title of a game you’re reviewing is a bit of bowel clenching terror you know you’re in for a good time. See the Serious Sam games aren’t designed to be scary but there’s still something terrifying about walking into a new room in one of these games. Since enemies tend to spawn out of thin air, in hordes at that, your every step can turn into a desperate fight for your life.

Serious Sam DD XL tries to capture a bit of that spirit but it falls a good ways short. At first it does tend to make you move rather slowly, being careful not to bite off more than you can chew. You’ve only got one small automatic pistol with infinite ammo to start with that isn’t even all that useful against the weaker enemies. So you’ll find yourself leaping and hopping around to avoid the enemies while whittling them down.

As you go through the first stage you’ll grab a shotgun and tommy gun as well as the necessary connectors. By using the connectors you can put your guns into what is referred to in-game as a gun stack. What this does is allow you to fire every gun in that stack with a single pull of the trigger. By finding lots of guns and connectors throughout the levels, especially in the secret areas, you can create up to six stacks of six guns each for various situations. So you might put together a stack of two pistols, two shotguns and two tommy guns for dealing with the hordes and then put three rocket launchers, two grenade launchers and a flamethrower for dealing with the bigger monsters. A grouping of four chainsaws and two flamethrowers is a personal favorite that buzz saws through enemies at close range intensely fast.

Even this doesn’t break the game early on as you’ll have a limited amount of ammo to work with. Thus you’ll rely on your auto pistols, likely multiple ones in a stack to themselves, to deal with the weaker enemies until you purchase a few ammo upgrades for your guns. It takes some time to afford these upgrades as the shop is pretty expensive but by focusing on the ammo upgrades over the “special weapon” upgrades the difficulty plummets rapidly. A few of these upgrades, the priciest ones of course, will make the game almost laughably easy once you get a few into a stack, such as ones with homing bullets or high damage upgrades. Once this happens the game becomes a simple task of running from left to right while shooting non-stop.

There is a good bit of fun to be had with the somewhat mindless chaos of gunning your way through massive hordes of enemies but it does get kind of numbing after a while. It’s just too simplistic. The game does try to throw a few swerves in by having very basic vehicle levels, tricky environmental hazards as well as monsters that require very specific weapons to combat but these are only momentary concerns. Once you learn what you can run from and what must be dealt with even these troubles become much minimalized. 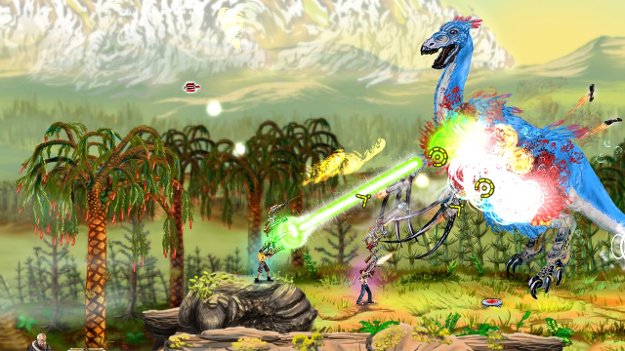 Where the game really manages to disappoint is in the presentation. It’s hard to believe that anyone could have expected what essentially looks like a flash game you’d find on the web. Sam and his enemies have very few animations so they appear to be gliding across the stages. It’s a shame too since the backgrounds look very well done and are quite nice to look at. The terrible voice acting is more easily ignored as is the bare bones story as those aren’t all that important in a Serious Sam game. But the weak gameplay, bland graphics and the somewhat bare bones musical accompaniment it just all feels like a half effort.

Continuing on the bare bones angle the cooperative mode feels mostly half-baked as well. Sam and Huff share the same inventory so if you collect a gun or combiner both people get it. If you put a weapon stack together then you both have it. This means that essentially you’re both sharing the same weapon build which makes for a kind of boring playthrough. Why can’t I have my own stacks? Sure you can split duties, so one player mostly uses a chainsaw stack for close range combat and the other prefers long range ammo spam, but you’re burdened by what you can both agree on.

From a game design standpoint though the game does what it sets out to do – create a side scrolling platformer-shooter with lots of badass guns and hordes of enemies to mow down. But it feels as if, perhaps, they could have done more with the game than they did. Neither the campaign nor the challenge rooms offer enough of a challenge to really sate the thirsts of any Serious Sam fan. Sure, the Serious difficulty level is up to par but you have to beat the game to unlock it and by that point a second playthrough is a lot to ask for from the gamer.