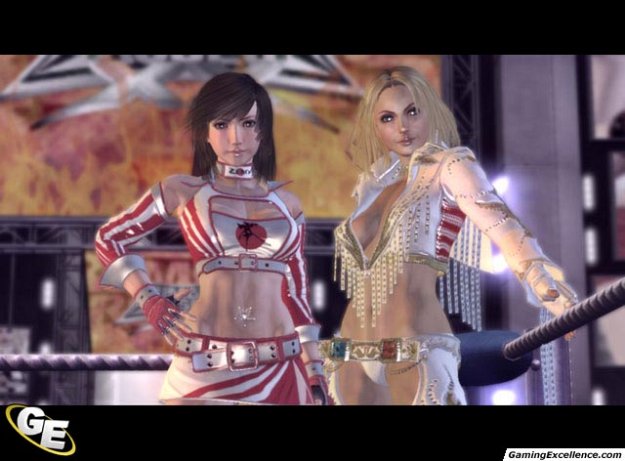 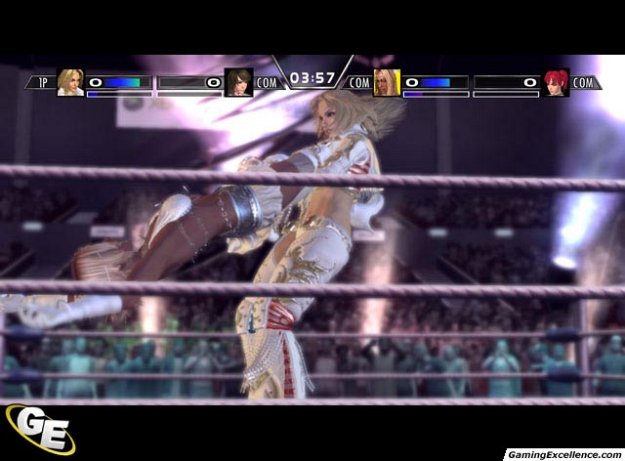 Rumble Roses XX is very much like that girl in high school that every boy fantasizes over. The one that's in a league all of her own. She has the perfect body, perfect smile, perfect hair, and perfect friends. She's always happy and smiling. She walks in slow motion. Sunlight follows her around wherever she goes. Cars on the highway stop to let her glide across. But when she agrees to go out with you, you realize that she smells like an omelet, has the I.Q. of a rutabaga and has probably served time in some San Quenton prison for stalking. Furthermore, she's obsessive, chatty, annoying, mouthy, hairy in places your grandma Rose doesn't like to talk about and has no idea what sarcasm, let alone humor, is. And to top it off, her little brother, the one with the braces and the perspiration issues, has your cell phone, home phone and work phone numbers memorized and he's just discovered the re-dial feature and has somehow gotten a hold of your IM address. Yeah, your friends are all jealous, but your life has turned to pure hell. Still, you can't quit her. As much as you know that things can only get worse and end tragically, you cannot leave it be. Rumble Roses, for intents in purpose, is just like that perfect fantasy.

Created by Yukes, the Smackdown experts themselves, and published by Konami, Rumble Roses XX is the next-gen update to the infamous PS2 title. While it may appear a sequel, this is truly an update that looks really good and tries to fix all the missteps of the previous edition. Rumble Roses XX (RRXX) is also a game that forgoes all attempts at pretending to be something it's not. As a society, we hypocritically allows violence of almost any form to be glorified, but the second that something sexual enters the mix (cup of hot coffee anyone?) we chant our prudish mantras and pretend that Paris Hilton/Pam Anderson videos don't exist and that Lindsey Lohan and Britney Spears sell CDs based on talent. We all recognize that sex sells, but we must always be given an "out" of sorts to carefully justify it. Well, RRXX is a breath of fresh air in the simple fact that it just shoves it in your face, boobs and all. Don't like it? Don't play it. Yes, the game uses sex, half-naked women and fetishes of all types to sell its product. Does it demean women? No more than any music video on TV and these are just polygons people, let's keep that straight.

Much like Dead or Alive Extreme Beach Volleyball, RRXX is as much a sexy collection game as it is an actual sport. Yes, there is a solid wrestling engine underneath it all, but every match is just an excuse to ogle half-naked women grappling each other while earning enough money for that new costume, pose or embarrassing punishment. And yes, every glorious little thing you've heard about RRXX is true: there is a photo mode in which you can dress up your wrestler in any unlocked costume, pose her (and her friend as you like) and snap away from any angle. Yes, you can upload/download pictures via Xbox Live, yes you can change physical attributes of wrestlers including bust size and muscle tone and yes, there is a match that allows the winner to pick a demeaning "action" for the loser to perform while you switch camera angles. And you know what? It all works perfectly well and is perverted fun. This game is mature rated and it delivers exactly that type of content.

Make no mistake however; there is a competent wrestling engine to be found here as well. While the move-sets aren't as complete as typical Smackdown games, the wrestling is no slouch. The problem stems from the fact that not only are the move-sets more bare-bones than WWE games, a lot of the match nuances are gone as well. Rope breaks, weapons under the ring, count-outs, refs, interference, tables, ladders, chairs, etc are all absent. And this, more than the lack of a story mode, is what hurts RRXX the most; the inability to tell a story through the match. You will find yourself playing with certain characters over and over in the hopes of getting title shots and unlocking stuff and you will soon realize that regardless of the arena you're playing in, which opponent you face or what you're wearing, the matches all seem to play out the same way. There is very little back and forth going on and once you've mastered the art of blocking and countering, matches will seem like a long, foregone conclusion to unlocking content (which incidentally, takes forever).

At the end of the day, you have to weigh so many aspects of this game to truly appreciate it: on the positive side, it features ten playable characters (with four personalities each), a create-a-rose mode (which is, unfortunately, somewhat lacking), lots and lots of content to unlock, great muscle tone and physical attributes customization, excellent collision detection, pretty good music, nice entrance videos, gorgeous women, fetishes galore and a good physics engine. You also get exactly a really impressive looking game as well as loads of sex appeal.

On the negative side, there is no sense of direction in the game at all. It's hard (read: impossible) to know what to do next, how to unlock anything, how to get title shots, etc. This game proves to be more cryptic than getting Kasumi to wear the damn Venus! The instruction manual, while colorful and full of text, doesn't explain move-sets at all or unlockables. The mud matches have been removed completely. While each character has four personalities to unlock and play as, a few new characters would have been nice. Dixie looks different this time around and not in a completely good way. There are small clipping issues here and there. Changing muscle tone too much can make certain characters look like heroine addicts. The create-a-rose mode is a little too generic in its character creation mode and the move-sets available. No story mode whatsoever.

In the unforgivable category, the game is far too repetitious. It forces you to play sometimes upwards of fourty matches with one character in order to get a title shot. In the Queen's Humiliation Matches (where you pick an embarrassing activity for the loser), you have to play and win each type of pose in order to unlock a match that will give you the ability to purchase a costume. As much as I like unlockables, I dislike having only 0.6% of the unlockable content after 15 hours of play. This borders on madness, but I still keep playing (as do others on my friends' list). We don't like it, we feel bad about it, but we just can't stop going on with it. This may be Yukes/Konami getting a laugh at our expense, but we're strangely addicted, warts and all. And while there is an enjoyable street fight mode which feels a lot like Tekken Rumble XX, the lack of arenas doesn't help with the repetition.

Graphically, RRXX is definitely a step up from the PS2 version. The girls all look amazing and animate well. The arenas and water effects on the beach stage look good, but one can't help but wonder what this game would look like with Fight Night 3 quality graphics. Still, the muscle tones are well handled, the free camera use is smooth, the lighting is great and the costumes are stunning. Dixie, as mentioned earlier, looks a little odd at times as do others in certain instances due to odd eye motion.

In the audio department, the game features a breezy soundtrack that borrows a lot from the PS2 edition. The traditional Yankee Rose theme is still as fun as ever and certain entrance songs borrow enough from real songs to be tongue-in-cheek funny (i.e. Miss Spencer's quasi Hot For Teacher song). On the flip side, the announcer, while hilarious at first, gets old very quickly and hate her in the long run. The wrestlers voices are generally well done and their lines are sparse but a few odd ones stick out like sore thumbs including a few of Dixie's lines which are incredibly annoying.

While there aren't a lot matches currently found on Xbox Live (everyone's claiming to be unlocking stuff in single player mode), what's there is solid if a little bare-bones. The match types aren't as varied as they could be, but the matches I've played have all been completely without lag of any kind. Maybe this is something other fighting games (cough, DOA4, cough) should look into. On a side note, conversation during matches (where all content is unlocked automatically and only the skimpiest outfits are picked) generally revolves around non-RRXX related stuff like other 360 games, Oblivion, achievements and occasionally, unlocked stats.

In the end, Rumble Roses XX is a competent enough fantasy grappler that focuses and thrives greatly on its collection aspect and voyeurism. This game is geared more towards fans of scantily clad women than wrestling fans (you know who you are). There is a lot of frustration to be had but oddly enough, the abuse seems to be welcomed as everyone I know is dutifully switching between this and Oblivion in almost equal parts. Fans of the original will love every aspect of this updated version and anyone curious enough to read this review should at least rent RRXX to see what all the hoopla is about. Worse case, the women are beautiful, the graphics are very nice, there's enough content to last you years (if you can stand the repetition) and it's also the only wrestling game/hottie-dress-up-game on the 360 until Smackdown '07 or DOAXVB2 hit the 360. Either way, I'll be playing it for a while still. Yes, just like the perfect girl who turns into a nightmare, it's just so hard to quit her sometime.