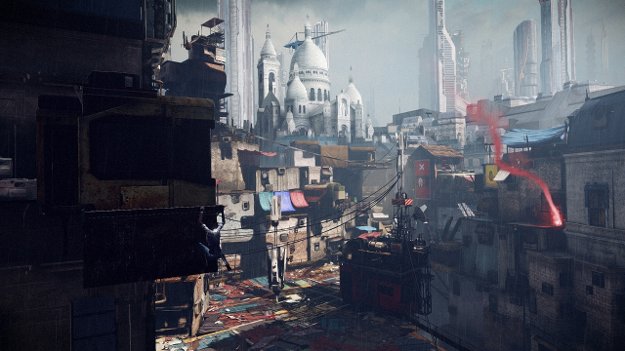 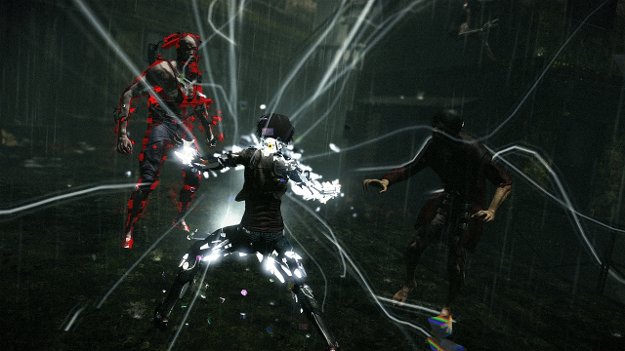 Remember Me is a game that takes an interesting and refreshing approach to gaming; it toys with the concept of memory and self.  We all know that our memories and experiences help shape who we are and how we react to the world around us.  And in Remember Me, the characters live in a dystopian society in which memories are commodities; bought, sold and tampered with by a repressive and draconian society.  Those who have lost all hold on their memories and their sense of self are mindless and dangerous outcasts. And those who steal memories are criminals who are hunted down like animals.

You play one of these criminals in the game, an Errorist (yes, Errorist, not Terrorist) named Nilin.  You are a part of a group who has been stealing memories and wreaking havoc on society under the watchful eye of your leader, Edge.  As the game begins, you wake up in La Bastille, a prison where the memories of criminals are stolen for the length of their sentences.  This prevents them from wanting to escape, because they can’t remember what there is to escape to.  You, however, mange to escape with some of your memory intact.  Edge assists you, so that you can continue on your mission to bring down the corrupt and broken society that you live in. 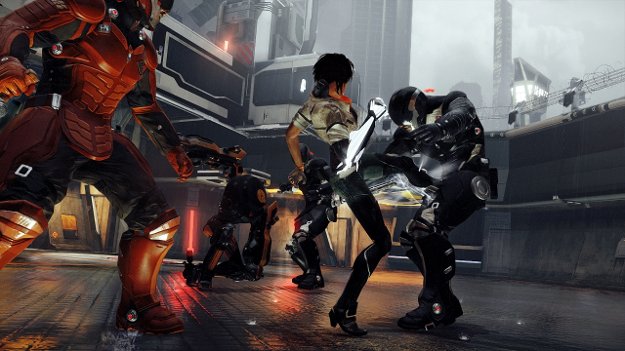 The game immediately starts off by introducing you to an interesting setting.  The high reaching towers and beautiful glass windows of the elite’s fancy neighborhoods provide a nice contrast to the broken, filthy back alleys and slums that the city’s less fortunate reside in.  Technology is at its height, with robotic valets and high tech gadgets intruding upon everyone’s living space.  It’s wonderfully detailed and very immersive.

The music is the game is equally intriguing.  When a fight starts, the game scratches up a poppy electronic techno beat, which sounds a little repetitive but is the best way to describe the music the game pipes out as you’re progressing through the game.  The game moves fluidly, your character flowing from one combat maneuver to another with a grace that makes it a delight to watch as you beat on the enemies faces.

This is the beginning and end of the grace or beauty in the combat system of this game, as the developers created an awkwardly cumbersome system to bash your way through the game with.  One of the trademarks of Remember Me is the Combo Lab, the system in which the player creates their own combos.  There are five different types of moves, or Pressens in the game. Power Pressens do massive amounts of damage, Regen heals your character, Chain makes the previous move in your combo more effective and Cool Down decreases the amount of time before you are able to do S-Pressens, which are special moves.  The game determines what your actual combos will look like, as in you have one combo that is always going to be Y,X,Y,X,Y no matter what you do.  You unlock each of the pressens, inserting the correct one into the sequence.  The first move in each combo cannot be changed.  So I could put a Power Pressen into the second slot, meaning that my second combo move will do damage.  If I put a Regen one in the third slot, I’ll heal and if I put a Cool Down one in the fourth, it will decrease the time until I can do my special move again.  S-Pressens also have a power bar that needs to be charged before they can be used.  They get charged every time you hit someone or every time you get hit.

Sounds like it’s not too complicated and not too bad to start with.  However, the Pressens open up as the game goes along, with the developers limiting the ones that you’re allowed to use.  So you may want to create an uber 7 hit combo with nothing but Power Pressens, but because the 7 hit combo requires the next move to be an X move and you haven’t unlocked any more X Power Pressens, you’re not allowed to.  So the combat lab is pretty restrictive and not as much fun as it may sound to start off with. 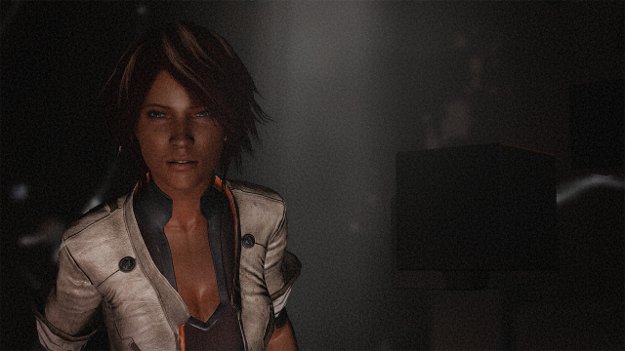 Also, the S-Pressens are a series of moves that you may think are designed to help you play the game, but what they really are is a series of moves that the game developers put in to force you into restrictive combat methods when dealing with annoying enemies that they decided to put into the game.  For example, there is an enemy type that can disappear at will and only appears if there’s light or if you use one particular S-Pressen.  The game determines when there’s an available light source, meaning that you usually have to rely on that ability to be able to see them to fight them.  Several other types of enemies are best handled when using the S-Pressen that stuns them.  However, the game loves putting them in the same massive groups with enemies that don’t get stunned by that Pressen.  Meaning that while you’re trying to deal with the mini boss that needs to be stunned, you’re getting your face punched in by the enemies that can’t be stunned.

Each of your special abilities has a very short amount of time in which they can be used and very long cool down times, meaning that the game is relying upon you using Cool Down Pressens on the enemies to be able to use the special abilities again on the enemies that need it.  Dealing with the hordes that the game throws at you is bad enough and juggling them is difficult enough without dealing with the special enemies. Because the special enemies require the special abilities, which require the special combos which are difficult to do without hitting the regular enemies. And you can’t hit the regular enemies because of the special enemies and it’s just a vicious cycle that repeats itself fight after fight in the game.  Frankly, it makes my head spin thinking about it.  To make it even worse, when you’re in fights without the funky special enemies, the combos because near irrelevant as you start mashing on the X and Y button to beat enemies down.  Simply be repeatedly pressing the button X, I could deal with most of the regular enemies in the game.  This was meant to be button masher that got up on its high horse and decided to be more highbrow than it could handle.

And the awkward fighting mechanic is just another in a series of awkward game mechanics.  The game is so caught up in providing the character with a variety of experiences that it doesn’t stop to think about if any of those experiences work well together.  Not only do you have the funky combat system and style of dealing with enemies, but you also have a serious amount of platforming.  You will not progress through the game if you are unable to handle jumping from ledge to ledge and while the game assists you by showing you where to go, there are a few cases where it’s not just a simple jump.  Some of the sections of the game even involve running from enemies while platforming.

The game even has puzzle solving which requires you to figure out how to progress from one section of the game to another.  One of the weirdest puzzles in the game involved the main character Nilin stealing someone’s memory to gain access to their password.  But of course, the person thinks about their password in the form of a riddle that you have to solve to progress.  Who in the world remembers their password with a riddle?  There are one shot kill droids to avoid and multiple areas where you have to use a special device you’re given to open doors and move obstacles.  And one of the game puzzles involves you changing people’s memories to get them on your side. The mechanic is so infrequently used that when the game asked me to use it a second time, it’d been so long I couldn’t remember how to make it work.  And I wasn’t allowed to go into the in game tutorial to remind myself.  I spent a good while trying to remember how to make it work. 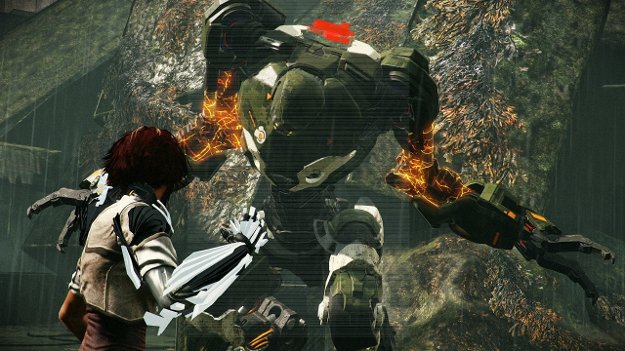 Remember Me is confused. It wants to be a button masher, but it also wants to force strategy on the player.  It wants to be a platformer and puzzle solver, but it doesn’t know how to carry those elements throughout the entire game long enough to keep it interesting and exciting.  I felt like the game was all over the place and didn’t really have a good direction or focus.  And it seemed as if it needed to drop one or two elements in order to really shine.  If it wanted to give me combat, it needed to change the mechanics.  If the combat wasn’t that important, it needed to drop it.  Something needed to give in the game and should have been left on the development room floor, but wasn’t.

With an interesting setting and good characterization, many of the games flaws could have been ignored.  Unfortunately, there is not a single likable character in the game. It’s full of people who deserve to be thrown off the top of the Eiffel Tower and left in a puddle of their own crushed up bone and brain matter on the ground.  Including the main character.  I could understand how she behaved in the beginning of the game; without a memory and with one mysterious person helping you, you’re inclined to go along with the program.  But after you complete your first big mission for Edge, he commits an atrocity of such a magnitude, I fully expected the game to swerve and for your character to start going after Edge.  Instead, she sticks around. She keeps helping him.  And then she eventually worms her way back over to his side and declares him the absolute bestest buddy in the whole world.  I wanted to take her off the top of a building and walk her off myself.

Remember Me is such a conflicting game.  It stumbles all over itself trying to present an interesting game and makes so many missteps.  The combat is awkward and overly complicated in some fights while being a basic button masher in others.  You go from platforming to annoying fights to puzzle solving in a matter of moments and nothing really flows well together.  The characters are unlikable and there’s no one to connect with in the game.  It’s not without its redeeming qualities, but as a total package its simply subpar and sadly so.