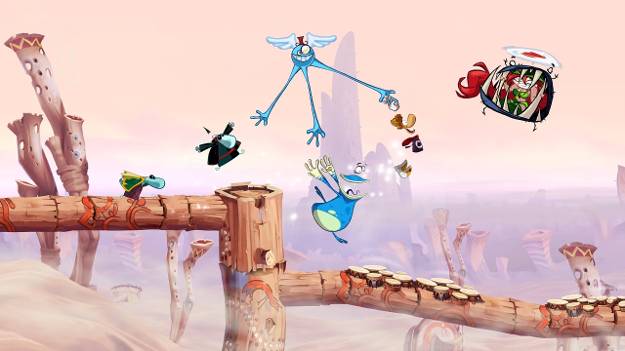 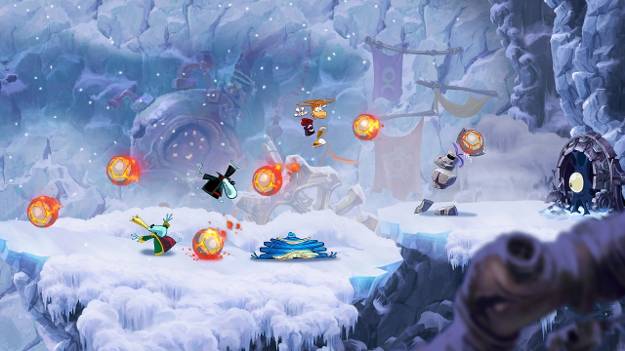 This year Ubisoft is celebrating their 25th anniversary, and what better way than to send their original limbless character, who helped put their name out in the first place, on a new adventure?

Rayman Origins takes many of the elements of the original game in the 80's, such as rescuing the caged happy-faced sphere creatures and the use of special moves Rayman is known for, while adding a fresh take on the series. Twelve worlds will be at your disposal, with fifty maps within, all chalk full of intense, yet still comfortable and familiar, game play, secret levels, and boss battles. The visuals are as bright and colourful as ever, keeping your eyes entertained as you traverse through the worlds in all their bizarre yet interesting glory.

This is the first game by Ubisoft to make use of their newest technology, which they've dubbed "Ubiart Mono Colour." It's a concept that allows them to use actual, drawn animations, rather than computerized creations, as the animation within the game. It's easy to see how that would affect the play experience; the 2D graphics are both crisp and very colourful, leaving you feeling like you're playing the game through an animator's table. It's as though you're controlling your own cartoon show, which is a nice break from all the 3D titles out there nowadays.

Difficulty in the worlds and levels have a decent range, with 'easy' feeling like a tutorial, minus the actual tutorial, and the most difficult requiring even a veteran player to replay the same section several times over. Since each level is split into 'sections', there's no worry of having to start at the very beginning should things go wrong; the transition between sections acts like a checkpoint, and you'll start at the beginning of the section you're in should you need to do it over again. While the easier levels are relatively simple and could be completed on your own, the harder ones would best be played with friends as your chances of making it to the end become higher.

Whereas the original Rayman game could only be played one player at a time, Rayman Origins has incorporated the multiplayer concept, allowing you to play with up to three friends in the now standard drop-in/drop-out concept. Player one will always be played by Rayman, player two plays as Globox, a large blue creature fans of the series will already be familiar with, and players three and four will play as different coloured wizards called"Teensies."

As you play with friends, should any of you be 'killed' you will become a floating bubble and need to be 'popped' by another player to be revived. It's similar to Super Mario Brothers Wii, though without the audio cries for help and with the ability to control where you float. While you're in bubble form you steadily lose coins you've acquired throughout the level, so the sooner you're revived the better for your in-game wallet. The bubble feature can be useful, especially for the hardest of levels, for so long as one out of the four of you makes it through the chaos, all the while reviving others, your chances of passing the levels rise high up.

When playing together, you can interact with each other, as well as with the environment and the enemies you encounter. You can 'slap' your friend to temporarily disarm them, or, if you want to work together, you can help each other out by having one player jump on the other to get a jump-boost to reach a high area. The power-ups themselves were disabled for the demo, but I was promised that they do add quite a bit to the game play and are both useful and fun to use.

From what I was shown of the game, Rayman Origins looks to be a fun experience that new and old fans alike will enjoy. The inspirations from Super Mario Wii are fairly obvious, but, SMW had a lot of great points and ideas so that could very well be a good thing. With the promise of over 100 different characters to encounter, plenty of levels to explore, the amazingly crisp and colourful graphics, and, for me anyway, the chance to play through another adventure with a character I've known for years, I think this game will be worth checking out by many. Rayman Origins will be available for the Xbox, PS3, and Wii on November 15th of this year.