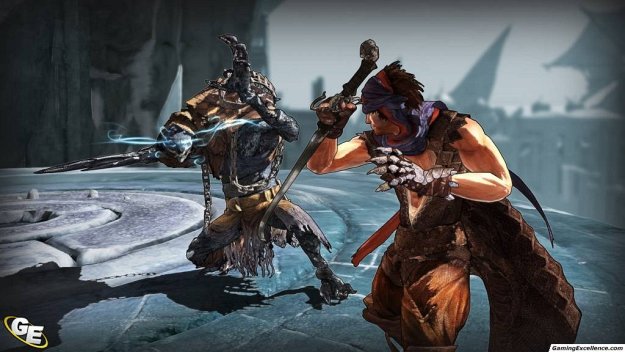 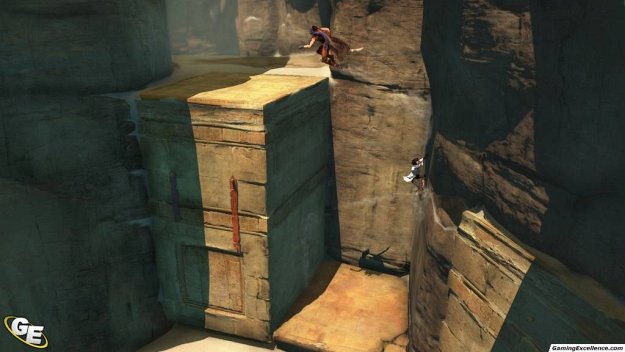 Ah, Prince of Persia. I remember you, back in the day, avoiding pits filled with spikes, falls to the death, blades that chop you in two, and guards who really did not enjoy my pixellated sword stabbing them in their pixelated chests. It's been through multiple sequels and reinventions, some of which have been successful - such as the Sands of Time series - and some of which have not been quite as pleasant (we do not speak of Prince of Persia 3D.)

The latest reinvention has no subtitle. It is simply Prince of Persia. And it is a great reimagining of the series.

It begins with a thief, searching for his donkey (laden with gold). And then a dark god is released, intent on destroying the world and all life. You know how things are. Along the way he meets a princess! And terrible evildoers, which are not quite as pleasant as the princess. The story is a big part of the game, and while it's somewhat generic (evil released, seal it up please), it's done well. The characters, especially the nameless main man, are interesting, and the dialogue is excellent. It's also genuinely funny, with snips, comments, and conversations that actually made me laugh.

Gameplay is deceptively simple, though it may not look it if you were to watch the game in action.
The objective of the game involves purifying various lands of a corrupting, black, ooze-like substance that spells bad things for you if you manage to come into contact with it. You must get through an obstacle course of well-designed level geometry and an enemy here or there. The platforming is generally simple, but elegant, and involves jumping over gaps, scaling and climbing across walls, using hooks laying conveniently about, and utilizing magical plates, which I'll get to in a bit.

It's smooth, easy, but ultimately rewarding to see the prince scale down a wall, use a hook to climb under the wall, crawl along the ceiling, grab another hook, scale up the other side, grab a hook to get some extra height, then leap off the wall to reach a hanging platform, all in one go. Your partner also helps by giving you a mid-jump burst of height, which you'll need to clear some gaps scattered about the levels. She also lends a hand by way of her magic powers that you unlock as you progress through the game. These powers, activated by the metal plates that I mentioned above, allow you to do things like bound across the level or run on walls for extended periods of time, and certain powers are needed in each level to reach their end.

There is also combat with the followers of the dark god, which has been heavily reworked from previous titles. Gone is the clunky multi-man combat, replaced instead with a system of one-on-one combat, where emphasis is less on direct character control and more about stringing together a variety of attacks to increase damage. At your disposal are four types of attacks, one for each face button: your claw, agility, sword, and partner's magic , and putting them together in the right way means a powerful combo that almost plays like a cinematic. The longer your combo, the stronger each extra hit does.

The really interesting thing about this game is the complete lack of player death in it. There is literally no way for you to die. Jump into a pit, your princess will pull you to safety, depositing you on the last piece of ground you were standing on. Likewise, in combat, if you fail to save yourself from death (by pressing a button right before the enemy delivers a finishing blow), the princess will step in to rescue you. This does come with the caveat that your enemy will recover a large amount of health in the process. This lack of death does give the feeling that the game is a little easy. At the same time though, it's essentially a replacement for the continue screen, which is just irritating to get to. This way there's no loading time or waiting, and you get thrown quickly back into the action.

The order in which you choose to purify the lands is largely up to you. When you first get there, and most paths are covered with deadly corruption, you're generally forced along a single path. You get to the end, fight the big baddie of the area, then purify the land--and this is where, arguably, the meat of the game comes into play. At this point a number of 'light seeds' appear scattered around the level for you to collect so that you can unlock more magical powers for the princess. This is the really fun part of the game, because this is when it truly becomes non-linear. There's no one path to get every single one of the seeds, so you'll need to check every area to see where the remaining few are, jumping, running, and flying around obstacles in your own way.

The art direction really impresses me in this game. Environments are large, open, and filled with a feeling of magic, the same feeling that the first game in the Sands of Time series conveyed. Old balloons still hover above the ground, impressively elaborate structures stretch into the sky, and everything is filled with a sense of wonder, as only a magical landscape can be. The fact that the characters are all drawn like a sort of painting--a special kind of cel-shading that I haven't seen before--really helps the atmosphere as well.

This game makes a bold introduction to a new kind of Prince of Persia game, where it's about the things you do, not necessarily the path you take. It's a really fun game to play, with good characters, controls, locations, and objectives, and is truly an evolution of the series. The Prince of Persia series has been going on for some time now, ever since the first little white-clad prince jumped over (or got impaled by) his first set of spikes. And judging by this entry into the series, it's likely to go on for a very long time indeed, and I for one have no qualms with that.