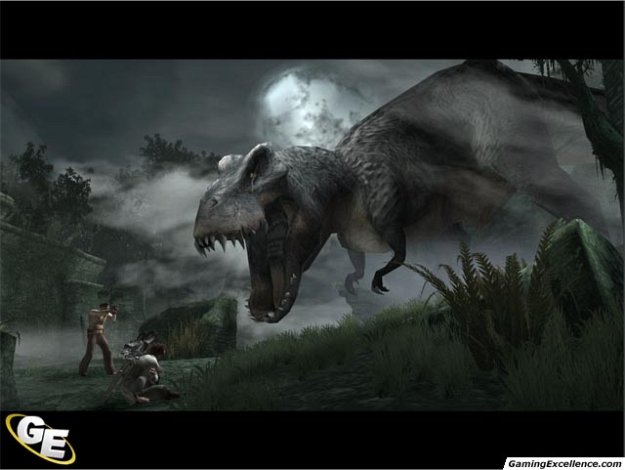 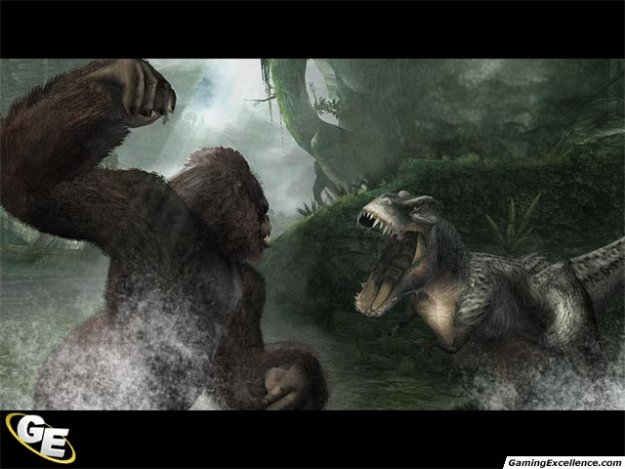 There is a lot of hype surrounding the new King Kong game for the Xbox 360 game console. Apparently Peter Jackson himself (director of Lord of the Rings trilogy) is playing a major role not only in the new movie but in the game itself, and a lot of people are excited about the chance to play as King Kong. Well the GamingExcellence team got a chance to cut through the hype and get some first impressions of this highly anticipated game at X'05 Canada. The look and feel of the King Kong game blew people away and definitely made it one of the gems of the show.

While there are multiple versions of this game coming out right around the time of the movie, the Xbox 360 version is easily the best looking one of the bunch. The environmental detail from bump mapping to the wet look on the rocks as the rain pours down is definitely a sight to behold. King Kong is also innovative by doing away with displays of health and ammunition and simply gives you the environment around you in full screen. It does become somewhat of a problem when you don't know if you're running out of ammunition or not but it does achieve the effect intended. It completely immerses you in the experience, especially when you have a T-Rex breathing down your neck as you sprint through the Jungle. Peter Jackson's influence in King Kong is also easy to spot when you look at some of the sequences in the game. Even during normal gameplay, you get very cinematic camera angles that add a lot of excitement to the battle sequences. Most games only try to use different movie based camera angles during cutscenes but King Kong will let you get a special view of yourself while jumping from a vine and falling on top of three T-rexes to save the girl.

King Kong offers two types of gameplay. You can either play as Jack or as King Kong. However, details are not clear yet on whether or not you will have different single player campaigns for each character or if you only get to play as King Kong at certain spots. Playing as Jack works a lot like a first person shooter type of game. Jack is able to fire weapons and pick up objects in the environment for defensive purposes. During one of the levels, where you have to distract the T-Rex while your companions open a door, Jack is able to pick up a bamboo stick from behind one of the rocks and actually throw it at the T-Rex to get his attention. Not only that, but you can also shoot nearby flying dinosaurs in order to make the T-Rex eat them and have his attention elsewhere. This gives a lot of variety as to how you get away or through obstacles and adds a lot of depth to gameplay where you have to constantly search the environment. The fact that you're only a small human running away from a giant dinosaur also gives you an extra adrenaline rush and the game really tries to highlight this effect by adding a lot of suspense to gameplay.

Although playing as Jack will get your adrenaline pumping, King Kong was the most fun to play out of the two. After all, being a massive gorilla is what separates this game from other first person shooters. At one of the King Kong stages for example, you have to drop a woman on a safe place and battle a T-Rex before moving on. You then follow a predefined path and save the girl from 3 T-Rexes at the end. King Kong is able to jump from vine to vine and climb up vines as well although most of the jumping seemed to be done at certain parts of the level and is not a natural gameplay maneuver. Your huge gorilla has a variety of combo moves and additional throws to get rid of T-Rexes and other creatures. There's a good variety to the "throw moves" with the ability to toss enemies on the ground, pick up enemies and put them on your back, or simply hold enemies in your hand if they're small enough like a raptor. While you can also throw T-Rexes at walls, the best throw is definitely the one when you get to break the T-Rex's neck by pressing down on one of the attack buttons really fast. You also get a power-up move, during which King Kong will beat on his chest and you'll hear a roar. This power up will make your normal attacks stronger and the screen will have some effects with every blow to indicate that you're doing more damage. Despite this extensive repertoire of moves, King Kong's control scheme is actually rather simple. Pretty much the only part that gamers may find frustrating, is that you can't tell when you're losing or winning the battle against your enemies. Whereas with Jack, the lack of a health gauge doesn't really affect you much since the T-Rex can kill you in one or two hits anyway, King Kong's character plays a little differently. The T-Rex's actually battle King Kong and it may take several hits to take him down. While seeing King Kong brawling with dinosaurs without any obstruction to the view is a sight to behold, the battle itself can become a little disorienting.

King Kong does seem to be quite the title to watch out for on the Xbox 360. Not only are the graphics astounding, but the cinematic gameplay will also make you think you're playing an actual movie. While it may seem like a small thing to take the health and ammo meters away, it really does accentuate the whole experience and definitely immerses the player further into the King Kong world. Some gamers may complain but it's good to see different ideas making it to new games. The fact that it's not an overly complicated game to get into also increases the fun factor, and makes beating up T-Rexes with a huge gorilla even more fun.