Pac-Man and the Ghostly Adventures (X360) 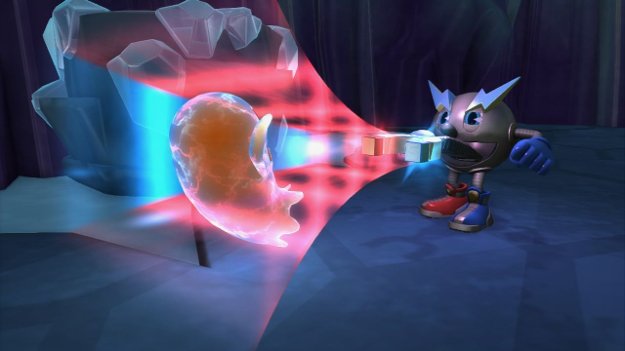 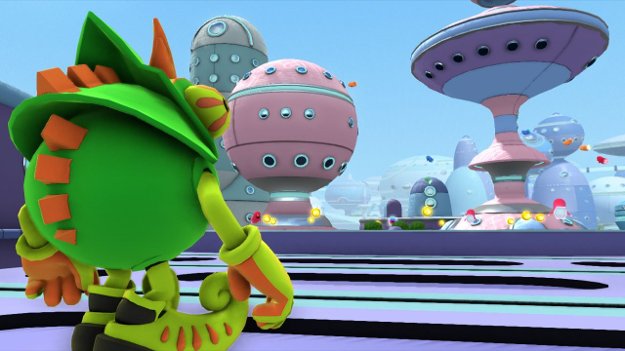 At some point, Pac-Man became a Saturday morning kid's cartoon. Why the little yellow chomper who eats pellets and runs from ghosts needed an epic plot about destiny, a leader of ghosts by the name of Betrayus, and an entire world filled with characters is beyond me, but there you go. The game brings all the characters to your console of choice, letting you play as the only Yellow Pac in Pac-World to stop the evil Commander and save the world.

Immediately, it's pretty easy to tell that this is based of a cartoon directed at kids - the basic gameplay is pretty simple, cutscenes are like they're taken straight from the show, and everything is very bright and colorful. Unfortunately, this does mean that the game isn't really very engaging. A fairly standard platformer, Pac-Man and the Ghostly Adventures sees you running through a number of levels, collecting pellets (or 'energy globes' as they're called for some reason) and fighting ghosts by, of course, chowing down on them. Unlike his trademark titles, Pac can simply eat ghosts without worrying about negative repercussions here. In fact, in a grisly twist you can actually collect their eyes for extra lives. At the end of each level he even burps them all up, which is...strange to see, at the very least. 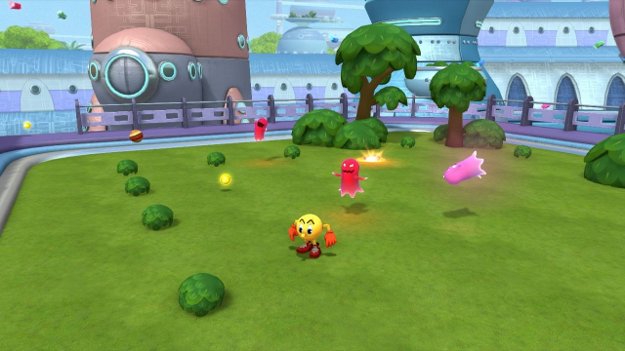 The platforming isn't actually too bad here - it's just really simple, especially in the beginning. But Ghostly Adventures, while shallow, does have some pretty solid mechanics under its belt (albeit with a slippery camera that can sometimes be a pain to get a hold of). Later levels try to make things a little complex, and generally are more interesting, but with the demographic that this game is directed towards, it's understandable why the game can't really go too overboard with difficulty. The combat follows suit, where simply pressing the bite button will home Pac in a nearby ghost, without much need for aiming or timing or anything of the sort.

The real variety comes with the power berries that Pac can find scattered throughout levels. As he consumes these, he'll put on various suits, allowing him to use a variety of different abilities. At first, these simply make things a little easier, and can be used to solve puzzles and environmental obstacles - turn into an ice-covered Pac to freeze enemies and cool down fires, or throw on a chameleon suit to turn invisible and swing across poles using your newly-elongated tongue. As the game progresses, however, these suits become necessary to take down certain opponents, and things get a little more hectic as you're trying to, for example, melt down ice ghosts with your new fire suit before you can eat them. These different power abilities inject some very-needed variety into the game, and while they don't exactly save it,  they make it a little more bearable, mixing up levels and the mechanics in a good way. 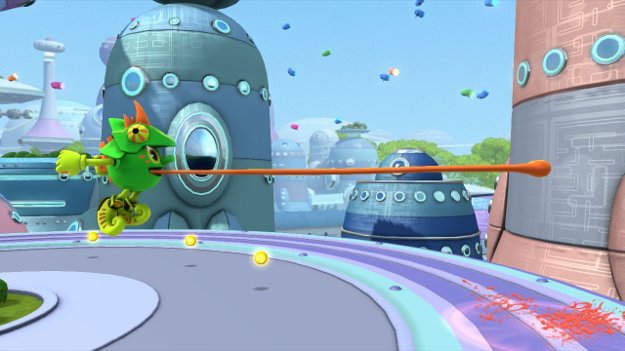 The game is presented as one might expect from a title licensed from a kid's cartoon - bright colors, simple textures, and some really bad voice acting. Pretty much every time Pac yells out a far-too-enthusiastic "My compliments to the chef!" or a ghost exclaims "Get the Pac-Man!", I just rolled my eyes. But with regards to graphics, while the game's appearance is pretty simple, it's does a really good job at making the levels appear bigger than they really are, with draw distances revealing details and activity far in the distance, presenting a scale that reminded me of the Ratchet and Clank series.  I was frankly impressed, at least with the Xbox 360 version I played.

Pac-Man and the Ghostly Adventures isn't bad, per se, it's just...really, really flat. When you don't have the power berries turning you into something, the entire thing is just really dull. And while the power berries are a really good addition to the game, I can't imagine them being enough to pique the interest of someone who wasn't really into the cartoon series in the first place. As an licensed platform, you could probably do a lot worse. But really, you could also do a lot better.