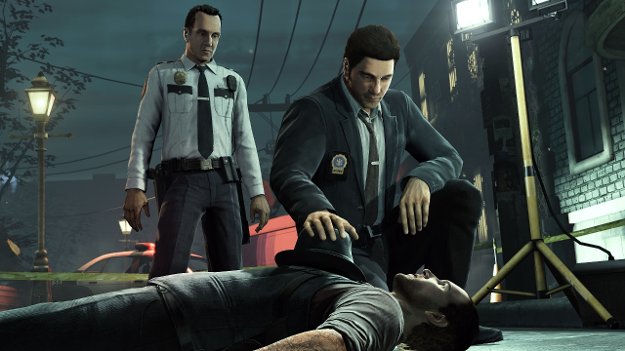 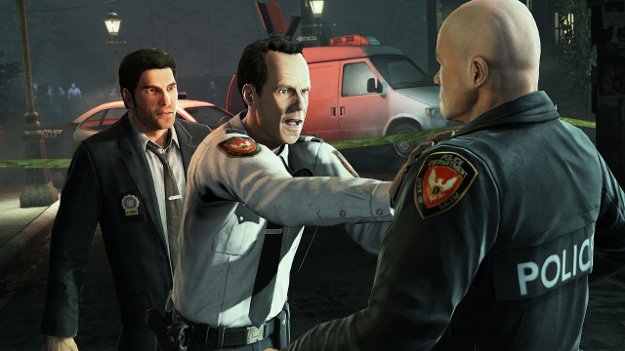 Murdered: Soul Suspect starts a little unusually, with the death of the player character. We watched as a detective met his untimely demise at the hands of a hooded figure, and then we watched as the detective, whose name escapes me at the moment, suddenly stood up, this time as a ghost. The point of this game, it appears, will be to solve the mystery of your own murder and the reasons behind it. It plays mostly as a sort of adventure game, where you must collect information and deduce facts from it, but there are also some minor combat situations involving unsavoury beings in the world of ghostly limbo known as Dusk.

The game started with the cops arriving at the scene, examining evidence and questioning the witness to your death. Of course, as a ghost, you can't do any of this, so Soul Suspect gives you a number of different ways to get the same information. You can, for example, view imprints of traumatic events and memory residue, which is sort of the same thing but for people. These allow you to view events of the past, giving you more information that the cops may not. You can also possess people, which allows you to see through their eyes, hear some of their surface thoughts, and sometimes influence them in a very minor way.

Puzzles in Murdered are fairly unique - you need to find information from the past, from imprints and residue, possession, and other ways (like finding a broken bat and figuring out that is was used in your death), and putting the information together to solve questions before moving on to the next area. A lot of the puzzles in the game come from solving questions by combining key words - for example, from looking at the bat we put together that the man who attacked, and subsequently killed, us was incredibly strong, being able to bend it right in half. There are also aspects of the game unique to being a ghost; for example, while you may be able to pass through almost all objects and walls, the people of Salem (the game's setting) have a tendency to christen their buildings, which means you need to find a point of ingress to enter them, like following someone living when they open a door or finding a way for someone to open a window that you can pass through.

The Dusk isn't completely empty, either. There are options to solve small side missions, like deducing the location of a corpse of a ghostly woman we met. On a more sinister bend, however, are demons. These red, horrifying apparitions stalk through through the Dusk, trying to consume your essence. To take them out requires stealth, as you must sneak behind them and dispatch them through some form of possession (you basically possess them, then explode from within) without them seeing you. It's unclear how much of a role these creatures will have, but it certainly added some tense gameplay into the mix.

The demo ended just as we discovered the location of another witness to the crime, and overall it certainly piqued my interest in what could come - I'm guessing some sort of connection between the Dusk and the real world, something that lies beyond the mundanity of regular murder. The game also looks really good, especially since it's a current-generation game, coming to Playstation 3, Xbox 360, and PC next year. If you want your supernatural mystery fix, then this one may just be up your alley.