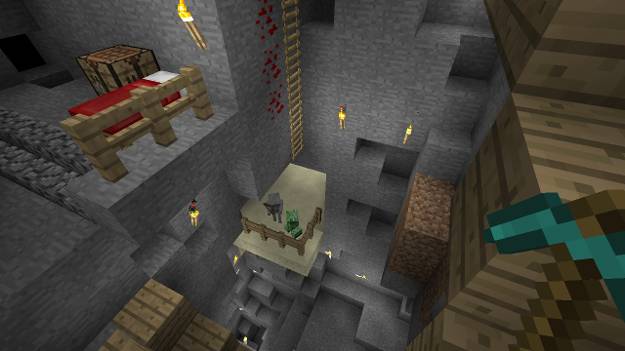 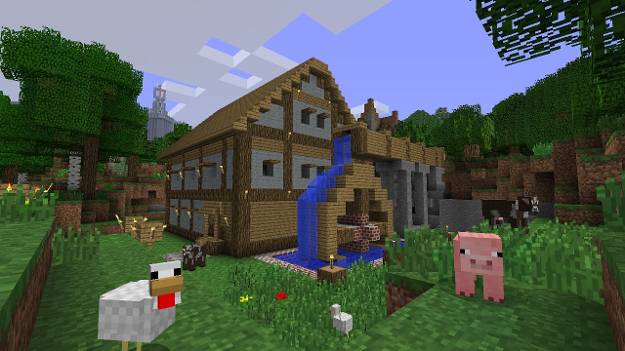 Before I get into the meat of the game, I'll first explain the giant invisible asterisk next to the above score. The only thing that saves 4J Studios' XBLA adaptation of the awesomeness that is Minecraft from a mediocre score is its potential. I allow myself to factor this into the score because it's not fictional or hopeful potential, but an actual visible roadmap defined by the PC and Mac version, and by the very different approach to game development embraced by Mojang, the game's creator.

For those unfamiliar with Minecraft, it's an indie game that has been available to the public ever since the most basic mechanics of the game were in playable shape. The Minecraft classic browser-based version is still available and free, and early fans could get the standalone version for next to nothing, not that the current version is all that expensive. The hitch was that it was being sold as a 'work in progress', which meant that for the longest time it was buggy and functionally limited, but patches/updates were free and frequent. It's been said that the same model is being applied to the Xbox Edition, meaning that the version released at launch on May 9th will soon receive its first patch and continue to be patched going forward. Presumably, what other games call DLC will actually be part of the (free) patch itself, since that's how the PC model works. Instead of charging for the updates, the one-time cost of the PC game increased as it crossed major functional milestones, so it was in fans' best interest to buy-in early. Still, I heard somewhere that it costs something like $40k to release a patch on the Xbox, so I really have to wonder how they plan on keeping this up, especially since 4J Studios will continuously be porting change sets from a completely different programming language, which must require considerable effort. But this is what's been promised.

Minecraft is a truly fantastic game in its simplicity, richness, and unlimited replay value. That said, it's almost impossible to convince people that it's actually any fun without having them pick up a mouse/controller themselves. I think the best explanation I've ever seen is one Penny Arcade comic. When it comes down to it, Minecraft's world is just a bunch of cubic blocks: sand blocks, dirt blocks, water blocks, stone blocks, tree trunk blocks, leaf blocks, etc. That is a fairly simplistic if not artsy way to represent the world, but it's core to the game's charm. So what do players do in this world? Well, you remove blocks, combine them to make tools (which help you remove blocks faster) or to create new blocks, and then you place them back. You can build tools and armor, chests to store blocks, furnaces to cook blocks, rails to get around, circuits to move stuff around, etc. It's building game, where building has no purpose other than personal satisfaction and accomplishment. If you need more reason than that, this is not the game for you. This is the part where many gamers will go back to playing Call of Duty or some other game that has a defined plot, with a defined start and end. Still, this game would probably have a tough time getting started if there were nothing pushing you to get going. But there is...

In the PC version, there is nothing in the game itself that warns you about the creatures that spawn in the night. So there you are, punching sand and knocking down trees with your fists when the sun goes away and a zombie comes out from behind a mound. Frantically, you find the nearest hole to cower in, or you quickly build a box of dirt around you, and then spend the night peeking outside to see the zombie waiting for you to make your move. The next morning, when the zombie is burned to death by sunlight, you'll be determined to build some kind of shelter before nightfall. The hook goes a little something like this.

The game's key hit-or-miss factor with gamers is precisely that it doesn't tell them what to do. Creative minds will find this very refreshing and engaging, while the uninspired will quickly become bored and switch to something else. There is however a trend for those that stick with it beyond the first hour, which goes something like this:

The fun of Minecraft is in its near-unlimited replay value. Inevitably, by the time one becomes bored with the current features, there's a new patch coming out. What's more, Xbox edition gamers can already find out what's up next by looking at the version history of the PC version (the Xbox edition at launch, v0.66, is equivalent to PC version Beta 1.6.6, which is already over a year old). In addition, the game has pretty much always been multiplayer-enabled, and collaborating on projects (and watching creepers come up behind your friends) is twice the fun. 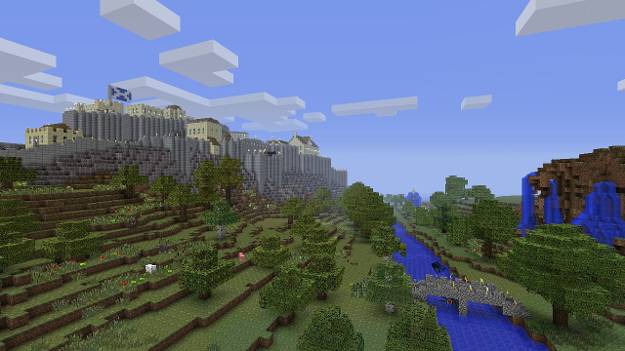 Now that we've established that I'm a huge fan of Minecraft and have spent the better part of my last eighteen months' spare time on it, let's talk Xbox edition. Simply put, I just don't get it. First, I can't imagine dropping a year's worth of new features (not to mention mods and texture packs) for controls that are far worse. I mean, they did as best as they could even in simplifying the item-crafting mechanic, even if it does dumb it down, but it's just not the same. Second, there's (currently) no support for dedicated servers – you can drop into your friend's singleplayer world, which is a really cool feature, but you can't play in that world unless your friend is already online hosting it. Third, mod and texture pack support is likely at least a year away. There are some really awesome mods out there for the PC version that keep the replay value going when patches are no longer doing it. And since the 'official' Modding API is still a 'To Do' for the PC version, it's not making it to the Xbox anytime soon. Lastly, how can you skip the crucial piece of functionality that is sprinting? This will irritate PC version fans to no end, unless there's an undocumented way of sprinting in the Xbox edition that I haven't found.

So how did Mojang / 4J Studios / Microsoft plan on selling this game on a console? It's not like the PC version has very high system requirements. The points above make it clear that they were targeting a different, likely more casual audience that doesn't care for complexity in crafting, won't be playing for extended periods of time, and doesn't have the desire or technical know-how to find interesting mods to enhance the game. Consider also that the game features much more tips, tutorials and instructions than the PC version ever did (the game did just fine on the PC, letting players figure all this stuff out on their own), and that Kinect functionality is planned for the future. What's more, the addition of split-screen multiplayer for up to four people makes this look like more of a party game. The failing there is that building anything in a new world takes a LOT of time, as implied by my typical schedule above, and in fact the time it takes to build anything is the source of pride and joy in having built it. Four people won't be able to do much more than set up a house and some tools in a few hours, and if it were faster to do anything more, there wouldn't be any sense of achievement in it.

This is made even worse by the bugs in the current release. In a span of 3 hours, I got knocked off my "server" (and I was playing a local single-player map, so WTF?) and later the game froze. This is when I discovered that, even though the common "don't power off when this icon shows that the game is saving" gimmick appears in this game, it doesn't appear to do anything. You have to manually save the map yourself, which takes long enough even on small maps to make you not want to bother. It's one (very frustrating) thing to lose your work when a creeper blows it up – that's just part of the game – but it's an altogether unforgivable one when you lose 4 hours of effort on a software glitch. I don't yet have a sense of how frequent this problem is in the current version, but the fact that it happens at all without some kind of half-decent auto-save is inexcusable. This one problem has the risk of scattering the bulk of undedicated gamers, which as I've stipulated, the bulk of the target market.

If the above issue gets resolved in a patch very quickly, Minecraft Xbox Edition has enough content to satisfy new gamers for a while – after all, the PC version had about a million registered users at the time of Beta 1.6.6. Fans of the PC version won't be disappointed but won't be converting to the Xbox Edition anytime soon either. More importantly, both groups will abandon this one very quickly if the patches and updates are too infrequent, and if 4J Studios close the gap with the PC's online multiplayer functionality soon.