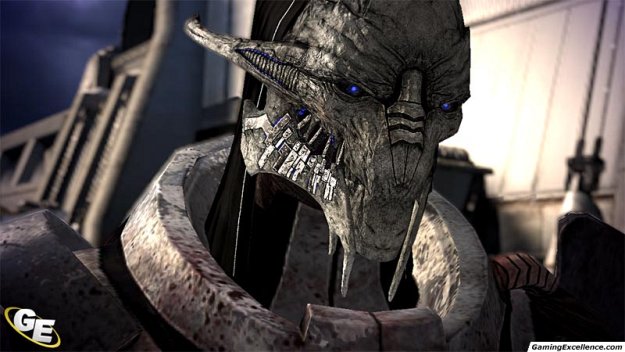 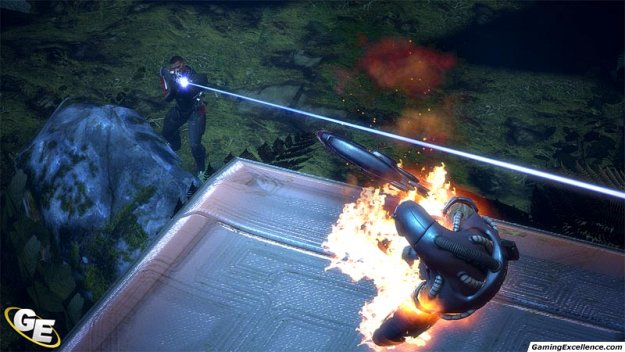 While most of the booths on the E3 show floor were showing off their company products, many of the "best of show nominee's" ended up being behind closed doors. And while some of them were expected to blow us away, BioWare's upcoming RPG blew our socks off. Even though we weren't able to play it ourselves, Mass Effect still stands as one of the most impressive demos of E3.

Mass Effect puts the player into the shoes of Commander Sheppard, a human Specter agent whose duty is to protect the galaxy from any threat. The story takes off with a mysterious alien forces living in the void outside the galaxy, and through local galactic legend it comes to Sheppard's knowledge that every 50,000 years this foreign power comes to harvest the major organic civilizations. Humanity is a newcomer to the galactic stage where there are plenty of alien races that have already discovered space travel, thus putting Sheppard at the forefront of Earth's representation to outsiders. While most of the plot was left vague to us, the story will develop and lead the player to various locales and meet new races in an effort to save the galaxy from this cycle of genocide.

Before starting up a new game you are able to change the persona of Commander Sheppard as you see fit. While the default character can simply be used to avoid all of the extra personal character tweaks, you do have the option to become either male or female. Throughout the course of the game you will be able to explore every planet in every star system, as well as any derelict vessels, or moons that are available. The scale of galactic adventuring seems absolutely massive, and while we didn't get an exact number of star systems that are available to explore, we do know that you can visit any area at any time. While exploring, you can choose to go around on foot, or use your all terrain vehicle. The ATV can also be upgraded, but these specifics were not given at this time. You can leave and enter your vehicle at any point, and are able to work with your team in a squad of up to three.

In BioWare's previous games such as Star Wars Knights of the Old Republic, a conversation with an AI controlled character is handled by having the player pick a conversation topic, or response, from a list of options. Once an option is chosen, the AI picks up where you left off. This never gave the gamer a sense of having a true conversation with someone else, but only gave him or her the ability to customize the responses for their character. In addition good or evil conversation options were sometimes difficult to determine and sometimes were represented in a different order in the list. In Mass Effect, different conversation topics are ranked by what type of response they are, whether, good, neutral, or evil. In the demo, the "good" option was mapped to the forward direction on d-pad, neutral to the right, and down was the evil option. The demo took us through different conversations, and showed us how the system responded. With this new mapping system, conversations can occur almost seamlessly. In previous games your character never actual spoke, but here Commander Sheppard will actually be shown having a conversation, whether he be sticking a gun in someone's face to get answers, or trading verbal shots. Your interpretation of the right thing is important in determining how you respond to certain situations.

One of the nice features in Mass Effect is the ability to issue movement and attack orders to your squad mates. The player can pause the action at any point in the game to issue commands, and then unpause so that they can be carried out. Since this is sci-fi shooter, some of the weapons include laser rifles and pistols, as well as projectiles with appropriate names such as frisbee grenades and homing projectiles. While we were not shown any of the leveling up RPG aspects, we can only assume that it will follow a similar style of gameplay to that of BioWare's previous products. While certain areas of terrain will be destructible, the whole map is not. However, the player will be notified when the option is available. So while we were not entirely exposed to all aspects of the game, we can be assured that there will be probably be a few extra features that were not made public.

One of the qualities of the game that really amazed us was the quality of the graphics and the lighting effects. While we do know that this isn't a final version, the lighting effects, especially with internal eye reflections, are absolutely breathtaking. In the demo, one of your allies is wearing a visor, and through her various movements there were different reflections off of it. An example would be when the light conditions are perfect, the visor appears clear, but if she turned her head ever so slightly, suddenly the tint of the visor makes it impossible to see her face. On the subject of the lightning, areas in the game with have different lighting conditions ranging from daylight to pitch black. Your weapons come equipped with flashlights, so while this could be a cool sort of weapon upgrade; this seemed almost a necessary asset in some levels.

Overall, the core story line for Mass Effect should take the average gamer around 25 hours to complete, however, that doesn't include side quests. Mass Effect is definitely shaping up into what appears to be another solid role playing game, and we'll keep a look out for it sometime in Q2 2007.