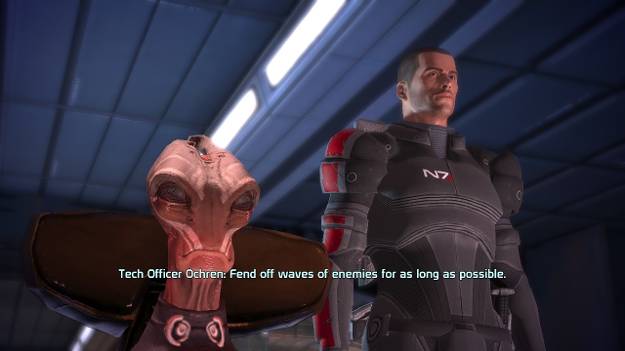 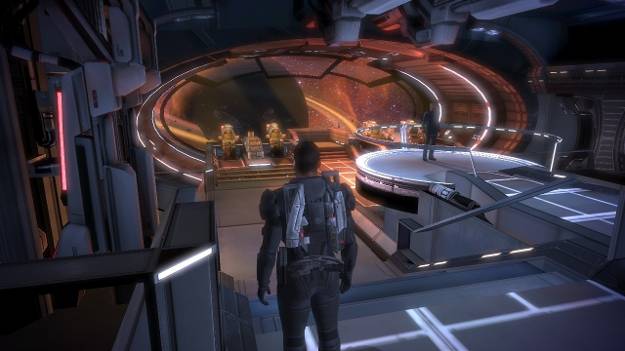 Mass Effect could be considered one of the more daring games to be released in some time. Taking a story driven RPG featuring one of Bioware's famous morality systems and in-depth storylines with third person shooter elements was a daring proposition but it paid off. Mass Effect sold incredibly well, gathering plenty of accolades for its storytelling and movie-esque dialogue system.

The original game wasn't without a number of flaws though. The combat system was clunky; feeling like a game inspired by third-person shooters more than an actual third person shooter itself. Navigating around planets in the Mako vehicle was an absolute trial at times. The inventory system was an ill-thought out mess. But the game managed to fight through its flaws by riding high on its merits.

It seems as when they were creating Mass Effect 2 they decided that they were going to "create by committee" in a sense. Gone is pretty much every single decision that people complained about. The game has been condensed into its core experience: a third person shooter with a fantastic storyline.

Picking up two years after the end of the first game Commander Shephard hasn't exactly had an easy time of it. After a long, arduous recovery from some injuries he finds himself being forced by circumstances to work with Cerberus, an extremist human organization that Shephard actually fought several times during the first game. It is now up to the Commander to put together a team out of the best of the beast the galaxy has to offer so as to run what amounts to a suicide mission.

Where the first game tried to blend the action RPG and third person shooter genres Mass Effect 2 has jettisoned most of the RPG elements in favor of streamlining the gameplay. The amount of skills to spend points on has been cut down from around six to eight to four for most characters, one of which is locked until specific requirements are met. Only Shephard has many skills to learn leaving him to pick up a lot of the slack.

In addition you only gain experience between missions meaning you don't need to worry about your level, XP or anything during a mission so as to not sidetrack you from the gameplay. Lastly since they have removed the inventory entirely you don't have any management to perform. All you do is pick a weapon load out before starting each mission, or when you find a weapons locker, and then out into the field of battle you go.

Many will find these changes very jarring but they were generally for the better. The gunplay feels a lot more vibrant and energetic now meaning it is less like a pale imitation of a shooter but has transformed into a fairly good one. The various guns carry real impact now and each one has its own place on the battlefield depending on what class you're using.

The main place the loss of RPG elements is felt is in the strategizing element to battles. Whereas before you had the ability to equip a variety of weapon affecting enhancements and then had a thick handful of special abilities to use this has all been trimmed down. Now the average character has only three or four special abilities at best, including weapon affecting enhancements. They've tried to make up for this by giving you a number of weapons to choose from, two for the party members and four for the player, including a heavy weapon.

Every weapon in Mass Effect now works on a "clip" system of sorts similar to other shooter games (the reason for this change is found in the in-game Codex). These clips are found very plentifully throughout most of the game allowing you to use your guns with relative impunity. Then there are the heavy weapons, a new addition to the Mass Effect universe. Rather than using special skills to do big explosions you can instead use these grenade launchers, rocket launchers and other, more high tech weapons like singularity launchers or mini-nukes. By mixing up your skills, changing weapon ammo types or using heavy weapons there is a good bit of variety.

Following on this pattern of changing things there have been some mix ups and improvements are the graphics and audio.

For example the graphics look almost identical to first game except they've been sharpened up. Everything looks a bit higher-res and fleshed out giving them more realistic appearances. Animations have been touched up as well removing a lot of the stiff movements from the first game. Even the combat animations look better from the small touches, like how Shephard reacts to the kickback of his weapon, to the bigger ones, like Shephard sliding over the top of cover to reach the other side.

Except for two very exceptions the voice cast is all very exceptional. Only male Shephard still sounds about as emotional as a bag of bricks falling on glass and Liara T'Soni, returning from the first game for a cameo, who sounds like someone doing a bad emo impersonation of Liara. Barring those two slip ups it's actually a treat to listen to the characters talking even if it's just some background conversation as you walk through a bar.

Much of this has been pretty much praise for the game but there are some things about it that will stand out to those who aren't quite as keen on some of the changes.

Of course the biggest issue many will have is how the RPG elements were more or less savaged. They've been changed to such a degree as to be barely the same game. If not for the connected plot and story the huge changes to the gameplay make it feel like it's barely the same game anymore. How you feel about this will determine how much these changes will bother you in the end.

Another issue is that your party members don't feel quite as… alive as they did before. They tell you a lot about themselves but you don't get it very much. Since they don't talk all too often about themselves nor do they banter in the elevators or during missions as much you don't really feel like you learn much about them. Oh sure you help them solve their life problems to get them loyal to you, unlocking their last skill, but they feel more like a part of the story as opposed to the fairly fleshed out characters of the first game.

There are assorted other issues that spring up on you, like how the downloadable armor you get with the Collector's Edition, or Blood Dragon Armor you get from Dragon Age, prevents you from seeing your face during dialogue. Or how the Cerberus Network they've held so highly isn't worth the value just yet. But these are all peripheral issues to the game and the game itself is fantastic.

Even if you don't immediately like the changes that Mass Effect 2 has brought to the series it's hard to argue with the successes of the games storytelling and atmosphere. Everything truly feels like it's slowly building to a head with only the crew of the Normandy to stand between the destruction of all sentient life in the universe. Barring any other issues or difficulties the game may have the core gameplay, backed up by the storytelling, more than makes up for these issues.