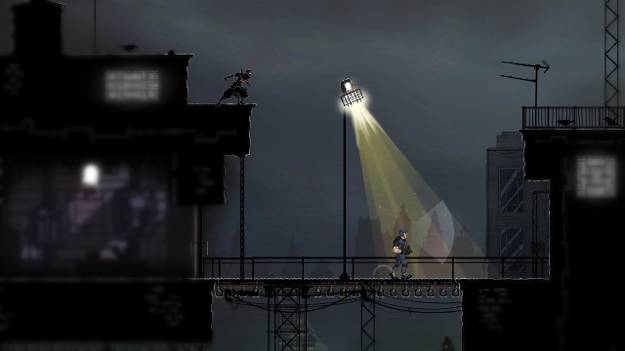 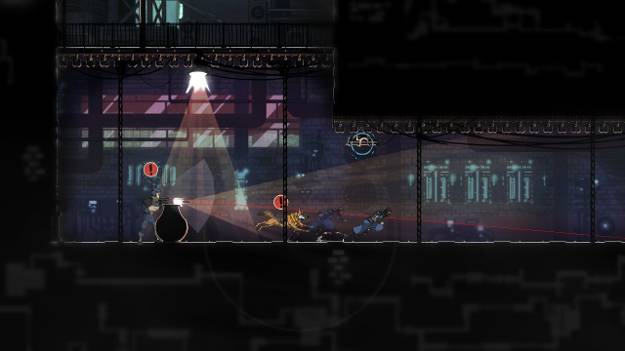 Klei Entertainment brings us Mark of the Ninja, the latest in their batch of 'so gruesome it'll make you giggle' games. You know, that evil giggle that makes people shy away from you when you unleash it in public. Wait...everyone doesn't have that giggle? Maybe I should rethink my cackle as well.

In any case, prepare to unleash whatever giggle, cackle or shocked gasp you have buried in that larynx of yours as you play Mark of the Ninja. In it, you are of course, a ninja. That was an easy guess from the title, right? Said Ninja has been endowed with special tattoos from his clan that allow him to perform special tasks and that give him special abilities to help him protect the clan. And that becomes a necessity as soon as the game opens, with your clan being attacked by an evil corporate force that tries to destroy you.

The first interesting thing about Mark of the Ninja is the kill system. The ninja's of your clan refuse to draw their weapon unless they know that they're going to get a guaranteed kill. So unless you've snuck up on an enemy, you won't be killing anyone. Instead, you'll be running away from them to avoid getting murdered as the alarms start blaring to alert everyone as to your ninja's presence. As you get the hang of the game though, this reveals itself to be an incredibly easy objective. There are vents, hiding spaces and ledges to rappel to all over the stage, giving you every opportunity to move around without your enemies noticing you.

In addition, there are ninja tools that can be used to assist in your endeavors. The most basic of these tools are ninja darts which can be used as distraction devices. They can knock out lights in the area to help create shadows for your ninja to move in, and can create other distractions to make guards look the other way while you move. As the game progresses, you gain access to other distraction tools such as noisemakers. You even gain access to tools that can flat out kill enemies, such as a spike mine that will murder enemies as they walk over it. Unique kill abilities are also available as you progress. For example, you're able to unlock the ability to string a guard up on a perch point, leaving his dangling corpse for others to see. These tools and items are unlocked as you progress, some of them being purchasable using points that you've accumulated through the game. You gain these points by completing objectives, killing enemies and picking up collectibles scattered through the stages.

Getting through the majority of the stages is simple enough. The game will direct you to your objective and you move towards it, using the in game map to assist. Your ninja will destroy generators, kill or sneak past guards and retrieve items; all in an attempt to avenge the attack on your clan and punish those responsible. Some of the stages can be challenging as they add in different enemy types that don't react the same as the normal guards. One of the enemy types is a dog that can sniff your ninja out in a very large radius, making them difficult to get around. There are also environmental challenges, such as alarms that your ninja can trip and sensors that will automatically start shooting missiles at you if you move in their vicinity.

The other part of the game is in completing the optional objectives. Several of the stages challenge you to get through without any alarms being sounded. One stage challenges you to kill all three of a particular type of special guard that require more than sneaking up on them to murder them. Completing these challenges also open up special outfits that your ninja can use that change the game mechanics. For instance, one of the outfits allows you to run without making any noise to alert guards and carry two different types of items to distract where you can normally only carry one. However it does not allow you to carry a sword for killing. That one is perfect for the complete stealth run where you don't kill any of the enemies. 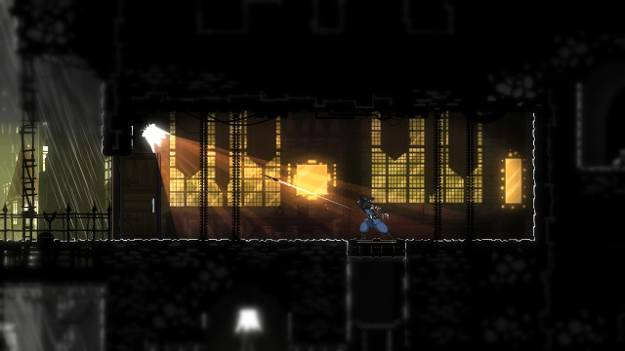 Graphics and sound in the game are incredible understated. The game relies heavily on light and shadow, with your ninja being able to move mostly undetected through the shadows. Avoiding the lights of the guards is an important part of the game mechanic as it allows you to progress without getting shot up by them. Certain items in the background can be used as cover to help you avoid guards, with these items being fairly easy to spot. Ledges that your ninja can rappel to are pretty easy to spot as well, along with ledges and walls that you can cling to, climb on and slide down. Because of how simple the graphics are, it's easy to see your options as you move around the stages. And because of the sound being as low key as it is, you really focus in on the game itself. A few sections suddenly start playing heart pumping music to set the mood for a hectic section, but otherwise the music is very sedate.

While most of the stages are pretty well constructed and allow for the player to be challenged without being frustrated, there are some that fall short of that. As with most games, towards the end it almost loses itself in trying to be too difficult by providing enemies that are more annoying than fun to deal with. Some of the environmental hazards can be frustrating to deal with as well; an entire level filled with toxic gas was not exactly the best time I've ever had in a game.

Another thing that was incredibly frustrating to deal with was the mechanics not always behaving as advertised. When using a distraction item, the whole point is to make the guard move in the direction you want. It may be because you're trying to isolate one guard to kill him, or it may be because you're trying to avoid killing guards to simply move past. Whatever the ultimate goal is, the player is counting on the distraction item working the way it's designed to. When dropping a distraction tool that makes noise, the game actually alerts you to the radius that the item will work in and the people who will be able to hear it. I found myself stymied occasionally by more guards being triggered by the device than should have been. And by stymied, I mean stuck on one section of the game for far too long trying to figure out how to get past a trio of guards without triggering an alarm and ruining a bonus objective.

Also, there are a few other glitches in the game that made it a little frustrating. For example, one of the days I played I had to stop for a while and turn off the Xbox. Shocking, I know. But when I came back, I had to restart the level from the beginning and wasn't given the option to start from any of the checkpoints that I'd hit over the course of that level. A friend of mine was able to pick one of their checkpoints and restart from there when they had to shut the game off for a while. Not fair, I say. Of course it could be my fault for turning the game off in the first place, but we won't go there.

Another glitch in the game has to do with bonus objectives. One of the objectives is to hide a dead guard in five dumpsters along the way. The objective had some difficulty in triggering if you died along the way and had to restart at a checkpoint. The game just wouldn't recognize that you'd already killed and hidden any of the guards. Restarting at checkpoints also resulted in interesting glitches such as dead bodies being 'spotted' by guards when they weren't actually really there anymore, making completing a section excruciatingly difficult.

Despite these problems, the game itself is a whole lot of fun. Restarting can be frustrating but not the end of the world, meaning that you have every opportunity to keep replaying until you get it right. And every time you play, you get the satisfaction of brutally murdering your enemies along the way. Nothing beats dragging a guard through a vent and shoving your sword through the bottom of his mouth. Except maybe scaring the crap out guards by throwing dead bodies at them and watching as they freak out and shoot their friends.

Mark of the Ninja is a great game. A few frustrations here and there, but nothing that should stop most people from being able to enjoy it. I was skeptical at first, considering the stealth aspect of the game and my propensity for loving to jump in and just start shooting at stuff. It made it hard for me to take my time and move through the levels carefully. However, I very quickly started enjoying the heck out of myself. I found myself switching between costumes, distraction items and attack items easily as I progressed, picking and choosing which ones I thought were the best or most fun to use. There's no one way to complete a stage and no right way to get through. The flexibility involved means that once you get to your new game plus, you'll have plenty of new ideas on how to get through the stages the second time around. So put on your ninja mask, grab a tattoo artist and get to work. Your clan is depending on you.