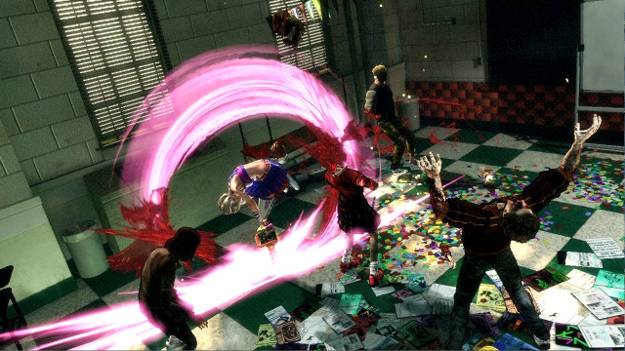 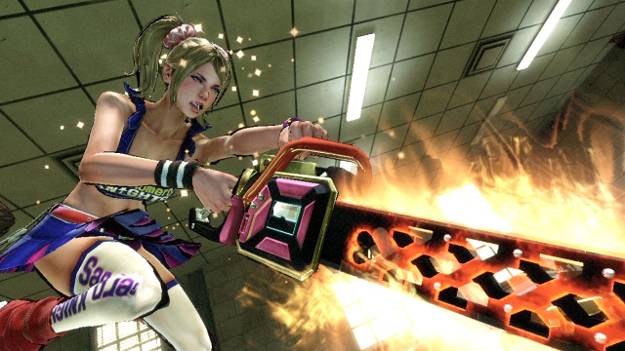 With all the zombie-related games, merchandise, and everything else out there you'd think the craze is over, yet evidently there's still room for parodies that make fun of the idea while still somehow honouring it. Grasshopper Manufacturer's Lollipop Chainsaw not only makes even non-zombie fans want to join in the fun, it makes fun of itself and the zombie craze so much that you can't help but have a good time playing it.

The story revolves around Juliet, a stereotypical blond cheerleader who's getting ready to meet her boyfriend Nick on her eighteenth birthday. As she gets ready while ditzily commentating on her life and her running late for her date, Nick is shown being attacked by zombies while waiting for her in the park. After a cute comic-inspired load screen of Juliet riding her bike, next thing you know you're seeing through her eyes as she's mowing down zombies with her bike. She eventually jumps off, reaches into her gym bag and pulls out her trusty heart-laden chainsaw, and it only gets more bizarre from there!

It's hard to describe the rest of the game's story without divulging too many spoilers; half the fun are the random things that happen and the bizarre solutions that come with them. What I can tell you is that the game feels like you're playing through several episodes of Buffy: The Vampire Slayer but with, incidentally, a zombie slayer, and you have to beat the five purveyors of death along the way. Your mascot ends up being your boyfriend Nick's head due to some nifty slayer magic and bizarre circumstances that, again, are more fun to see for yourself. 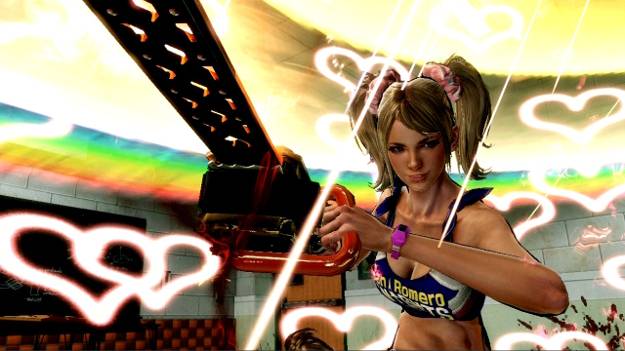 The controls are simple enough when you start the game. You're taught which buttons do what as you slash your way through the stage. Moves such as leapfrogging over a zombie then cutting through them crotch-to-head right after are unlocked as you play, and others can be learned by trading in zombie medals that you earn and find as you fight.

When you kill off zombies in an exceptional way the scene goes into a "sparkle hunting rewards" view where a slow-motion shot of your awesome kill is shown with sparkly visuals and pretty sounds. Achieving sparkle hunting mode is especially great as you also earn extra medals including platinum medals which are used to get rare items.

You'll encounter people in trouble along the way and you must do what you can to save them. A counter appears once one is saved showing how many are left to help. Sometimes more than one person will need help at the same time and you have to quickly assess the situation and figure out who to help first.

As you fight, a meter on-screen increases that, when full, enables you to go into sparkle mode. Sparkle mode allows you to hit any zombie, even ones with health bars, only once to kill them. This mode is also great for sparkle hunting rewards as it's easy to kill three-plus zombies in one go to get great combos as Juliet cheers, "Zombies taste my chainsaw death!"

Nick even plays a role when you fight. You can play Nick Roulette and, if you land on the right icon, you use him to make the zombies groggy by whirling him around you. There are times where you'll need to fuse Nick's head with a zombie's body and hit the right buttons to get him to complete an action.

The zombies themselves are humourous, saying things like "dying hurts so bad" and other ridiculous banter as you fight them off either one-by-one or (usually) in groups. Some have slightly different fighting styles so you learn to adjust what attack should be used for what zombie as you go. There are also "boss zombies" that have a health bar which you must empty in order to beat them. When you kill a zombie with a name, you'll acquire a random fact about them in your zombie collection (Pokemon-style) which is kept in "Juliet's Room." The boss zombies don't die right away, resulting with some interesting fights and death scenes.

As you go, you'll periodically encounter a pop-up shop called "choptoshop.zom" where you can trade in your collected zombie medals for new attacks, permanent stat increases like health, outfits for Juliet, music, and concept art while listening to the "Lollipop" song. Certain things require platinum medals which you can either buy with gold medals or earn them by being a stellar zombie hunter.

The game shows you where to go so there's no second-guessing. Some sections won't allow Juliet to enter and bright arrows and other cues will appear to guide you, though there's still a bit of room to explore and find things like collectible lollipops as well as the lollipops you eat to regain health. 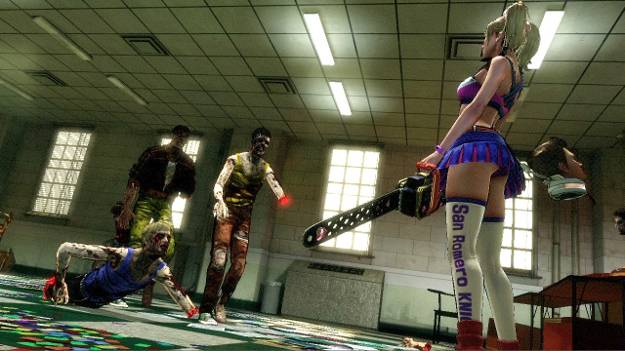 Once you've completed an entire level, each taking about 20-30 minutes or so to complete, and you've received your report card showing how well you did, you can switch to "Ranking Mode" and complete challenges in those levels that focus on your score, time, or the amount of medals you collect. It's non-stop so there are no checkpoints to rely on. Unfortunately when you replay these levels you go through the entire thing, and most of the mini-cut scenes can't be skipped so you have to deal with them every time you play.

The graphics are decent with bright colours in-game and comic-inspired load screens and map. The game doesn't take itself too seriously which makes the level of graphics perfect for what it's trying to do.

As you play you unlock great music tracks, plus you can buy additional tracks at the choptoshop.zom booth. You can even be the DJ of the game by selecting specific tunes to play as you do your thing.

Other extras include phone messages for Juliet (which she keeps in her chainsaw), trophies, Zombie Hunter Guides you can refer to in-game, and a zombie album (full of random facts you probably could do without, but are too amusing to ignore, about the named zombies you've defeated.)

For what it is, this game is beyond bizarre but in a great way. It's easy to see that the same people who made Shadows of the Damned are behind this as it has plenty of adult potty humour mixed with strange, nonsensical things, yet they make it work so it makes sense, somehow, within the game itself. This isn't a game for everyone but if you have a sense of humour and like Japanese-style stories (full of ridiculously random dialogue and situations) then definitely give this one a shot. Lollipop Chainsaw is available for PlayStation 3 and Xbox 360.