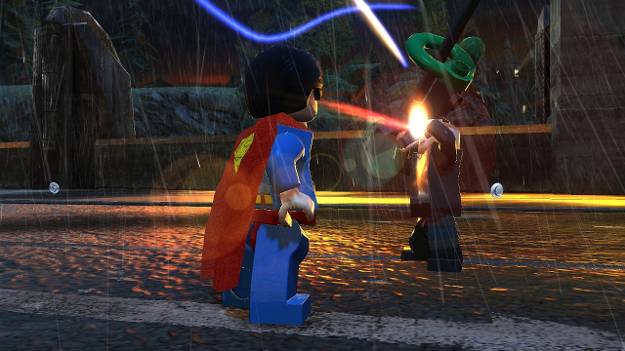 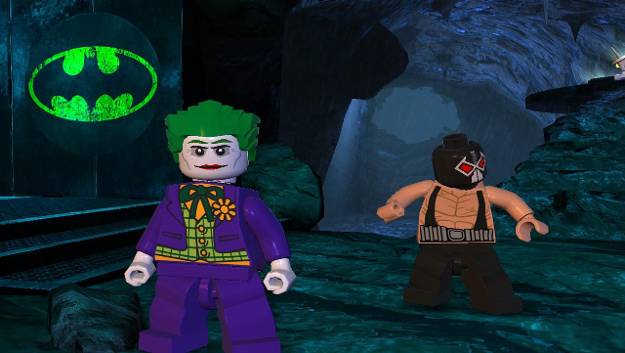 Chances are good that you've got a pretty good idea of where you stand on the Lego game franchise that started with 2005's Lego Star Wars. Either you love the series and its "run around and destroy everything!" gameplay, or it just doesn't appeal to you. As such, when writing about Lego Batman 2: DC Super Heroes, it's pretty tempting to just say, "You know how you've felt about the series so far? You're probably going to feel the same way about this one, too."

Pretty tempting... but also a pretty big cop-out, since I'm sure there's also a third group: people who have fond feelings towards the series, but who also feel as though recent iterations (I'm looking at you, Lego Star Wars III: The Clone Wars and you, Lego Harry Potter: Years 5-7) have started to come off as a little stale. I, personally, fall into this group -- and, judging from Lego Batman 2, I have a strong suspicion that Traveller's Tales did, too.

Thankfully, they decided to do something about it. They added voice acting (sadly, not Kevin Conroy and Mark Hamill). They took a cue from Arkham City and added an open world on top of the story. They threw in a Justice League's worth of other DC Comics characters, including Superman, Wonder Woman, The Flash and others. And, to wrap everything up in a nice little package, they made the game prettier than any other Lego game to date.

So good on Traveller's Tales for making an effort to switch things up in an established franchise. It would've been easy for them to just sit back and create your typical Lego game, confident in the knowledge that 1) by-the-numbers Lego games are still pretty darn good, formula or no, and 2) fans of the franchise would probably pick it up no matter what. Instead, they went above and beyond, and for that they deserve quite a bit of credit.

Unfortunately, there's a wide gulf between having great new ideas, and implementing them in any kind of meaningful way. And, even more unfortunately, Lego Batman 2 falls right in the middle of that gulf. With the exception of the improved graphics (which really are impressive), each of the game's significant additions are implemented in ways that also have significant flaws.

Take the open world, for starters. It's certainly cool that you have a city full of side missions. Whereas before the games' replay value was limited to going back and doing levels with different characters, this time out you can explore the city and change at will into whatever characters suit the situation. The problem, however, is that navigating Gotham City is a huge pain. You can only view full City maps at certain access points; the rest of the time you're limited to a flat line with icons in the upper left of your screen. You can't tell how far away the objectives are -- or even what they are, for that matter -- and unless you're a flying character, it's difficult to tell exactly where to find the map access points.

Coupled with the lousy navigation is the simple fact that it's not all that fun or easy to get around Lego Gotham. Drive your vehicle into a stationary object, and chances are good that it's going to get stuck there. Feel like flying instead? Then you must be a sadist, because flight controls are just awkward. Whereas you get to use both thumbsticks when moving around ground-bound characters, when you take to the skies as Superman, Green Lantern or Wonder Woman, you're limited to using just one of them. This makes flying in any direction other than a straight line a bit of a chore, to say the least.

Speaking of other members of the Justice League, don't go into Lego Batman 2 expecting to be able to play as them right away: they only unlock late in the game. Apart from a Superman cameo early on, you'll be limited to playing as The Dynamic Duo. Not that there's anything wrong with that, of course; they've been outfitted with enough different outfits that you're never really limited in that respect. Still, seeing as the game is subtitled DC Super Heroes, there's definitely the possibility for disappointment early on. 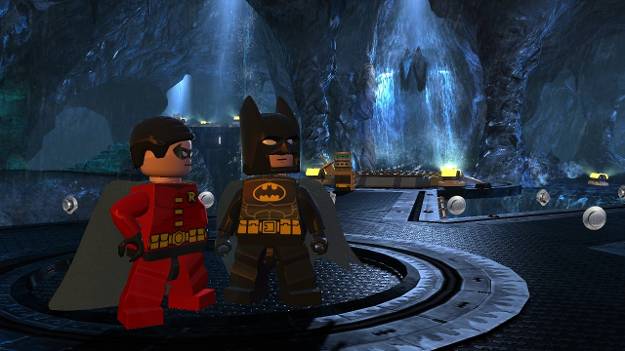 Finally, the voice acting. I don't want to harp on this point too much; I once had a conversation with someone who insisted that movies had all been downhill since the advent of sound back in the 1920s, so I'm well aware of how insane it can sound to complain about such a thing. But at the same time, in Lego Batman 2's case, I don't feel like they added much to the game. Past Lego games crammed lots of humour into cutscenes through simple sight gags and impeccable timing.

Here, by contrast, it just feels tacked on. At best, it adds emphasis to jokes that really didn't need to be emphasized; at worst, it's a little jarring, and makes the game feel less immersive (to the extent, of course, that you can be immersed in a Lego game). Case in point: the newscaster who provides running commentary on the absurdity of the situation before each level. While it was certainly cute, paying attention to her meant that it was easy to overlook the news crawl at the bottom of the screen -- which is where the really hilarious stuff was taking place (most notably, when it starts hyping up a boss fight and ends up announcing a Lego Batman movie). Like the addition of an open world, I can certainly understand why Traveller's Tales may have thought it was a good idea, but the execution just doesn't pay off.

Essentially, what that means is that you're left with a typical Lego game, for better (i.e. it's always fun to run around and bash apart bad guys and environments) and for worse (i.e. every so often you'll encounter a bug -- say, a piece that doesn't break correctly, or a character that gets stuck behind a wall -- that isn't quite game-breaking, but is annoying enough that you'll have to start the level over). And truthfully, there are much worse things a game could be. Lego Batman 2 probably isn't going to win new converts to the franchise, but it's hard to see it driving anyone away, either.

In other words: You know how you've felt about the series so far? You're probably going to feel the same way about this one, too.