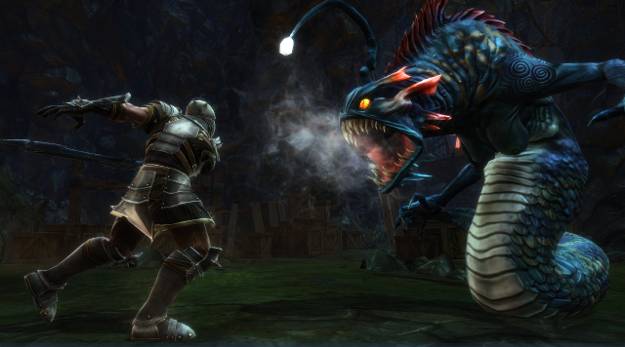 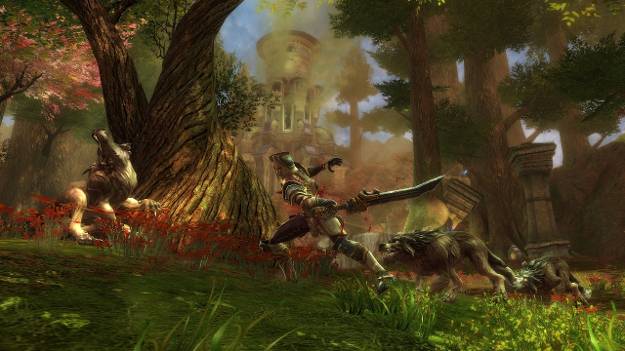 I wasn't sure what to expect of Kingdoms of Amalur. I had heard little of the title and little of the developer. From reports, I heard that it was a cross between Fable and Skyrim, though what that meant could have been anything.

So, when I was able to get my hands on it, I was pleasantly surprised by the result.

Reckoning begins with your death and subsequent (and quite surprising to everybody involved) revival. Emerging from the depths of a corpse dump, surviving an attack by a pissed-off group of immortal elf-like warrior race, you then are spit out into the world. The entire world.

Kingdoms of Amalur is not a small game. It's a semi-open world, in that you can go anywhere in the world, but the world itself is divided into sections. Each section can take maybe five to ten minutes to run across, but there are a lot of quests that will stop you from doing just that. Dozens of them, hundreds of them. Every area (and there are a good number of areas too) invite you to solve any number of problems, whether it's finding a travelling treasure chest, hunting down men for their weapons, saving someone from a deep and deadly cave, discovering the lost secrets of a civilization, and so forth. This is in addition to the long quest lines specifically related to the factions in the world, of which there are also about half a dozen. 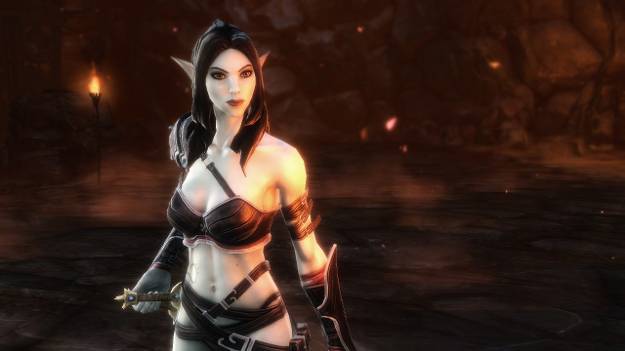 There's no shortage of something to do in Amalur. It may be a little disorienting, however, having so much to do at every given moment. The game does sort the quests (Story, Faction, Side, and Tasks – the latter of which are the kinds of things that take place over large areas, like collecting missing books from across the lands) but it still feels a little hectic. It makes it a little hard to take in the world when you're simply running from quest to quest. Still, unlike most titles you are able to highlight an active quest without removing all the quests from the minimap. This allows you to follow an individual questline of your choosing without accidentally walking by a treasure chest that may actual have an important item for another quest.

Of course, an RPG would be little without its RPG elements. Earning experience gains you levels, and levels earn you a single skill point and an ability point. Skills are general purpose abilities – crafting, sneaking, opening up things that don't belong to you – and can be increased at your leisure. None of them are required, but many of them are useful. Smithing, for example, allows you to take two base pieces, add a few more (one to three, depending on your smithing skill) and apply all of the pieces' individual bonuses to the new piece of equipment. This can make some powerful stuff.

Abilities are your typical RPG abilities – make yourself stronger with a weapon or attack, get yourself passive bonuses, and so forth. Amalur has three different groups of abilities to choose from: Might, Finesse, and Sorcery. Which one you pick is up to you, though it's quite easy to mix and match between the three groups to create what you want. Each 'class' has its own selection of weapons, such as the wizard having access to staffs, staves, and chakrams, while the thief gets daggers, faeblades, and bows. There's no reason you can't weild a longsword and a bow, of course, and since you can reset all your abilities at any time during the game, if you change your mind you can simply try something else. These abilities are also tied into destinies, passive bonuses that are tied to how many points you have in each ability tree. Choosing a different destiny gets you different bonuses, though as with the rest of the game, any combination of abilities and a destiny is perfectly viable. 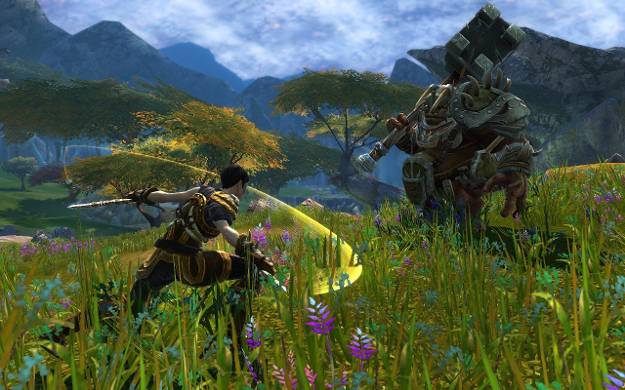 Combat. RPGs can't live without it. Amalur has it. Surprise! Anyway, in addition to four active abilities that you can equip, you're also able to equip both a primary and a secondary weapon, each mapped to a single button, allowing you to switch weapon attacks rapidly in combat. The combat is fluid, with dodging, blocking, and attacking all feeling quite serviceable. There's also something called "Reckoning", which, after filling up a bar with attacks and combos, allows you to slow down time, beat the snot out of everyone around you, then perform a finisher on one of them for bonus experience points.

If I had one major complaint with Amalur, it's the minimap. It's a peculiar complaint, but valid: you see, there's a skill that gives you information on the minimap. This includes hidden treasures, hidden doors, enemies and their positions, and more. Without this skill, you can't see anything hidden, and enemies will often see you before you see them (making sneaking up to them quite difficult). So you need to stare at your minmap all the time to make sure you're not missing something. So instead of looking at this vibrant world around you, you're staring at a pack of symbols. Hurray?

Amalur is good, but not great. There are games that are more than a sum of their parts, but Amalur is not one of them. Don't get me wrong, its parts are pretty damn good: an open world with a substantial amount of freedom; a combat system filled with combos, special abilities and weapon types; tons of things to craft and loot to collect; all wrapped in a vibrant world with some attractive graphics makes this a game that RPG enthusiasts can't miss. It's not going to blow you away, but it's well-made, polished to a bright sheen, and has enough content to keep you going for a very, very long time.