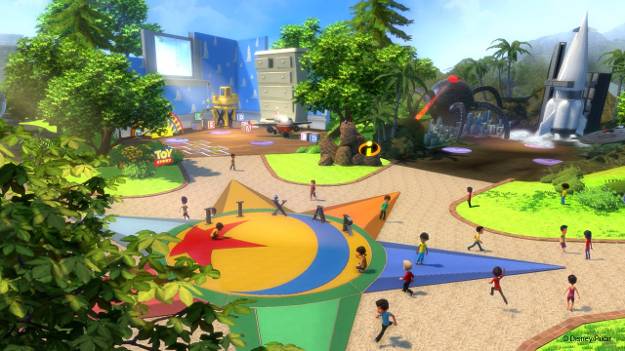 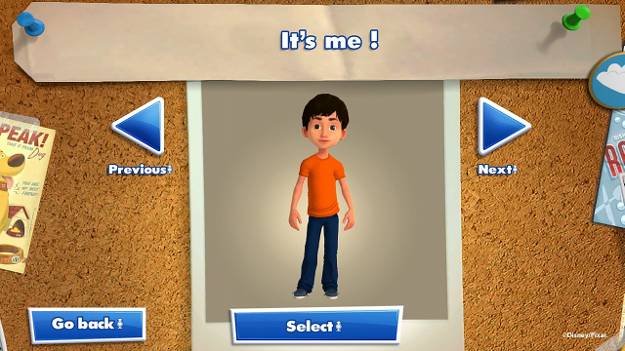 If you don't think Pixar movies are cool, it's possible you don't have a soul. So Kinect Disney/Pixar Rush had a lot going for it out of the gate. But too many E-for-everyone rated titles are actually not quite for anyone, so this game required some unique field testing.

Armed with chicken fingers, pizza, jello, and chocolate, I unleashed my six year-old niece and my eight year-old nephew on the game. The basic puzzles were too hard for the six year-old, but the eight year-old was enthralled. He would literally lie on the floor panting for a few minutes, catch his breath, then haul himself back up to play more.

For anyone familiar with Disneyland Adventures, Pixar Rush is the exact same concept: you're a kid avatar based on a scan of you done through the Kinect, and you get to go through the park on a completely unsupervised "field trip" and talk to other kids who apparently crawl out of the rides. Mockery aside, for an 8 year-old, this is the greatest thing ever that doesn't involve Star Wars. 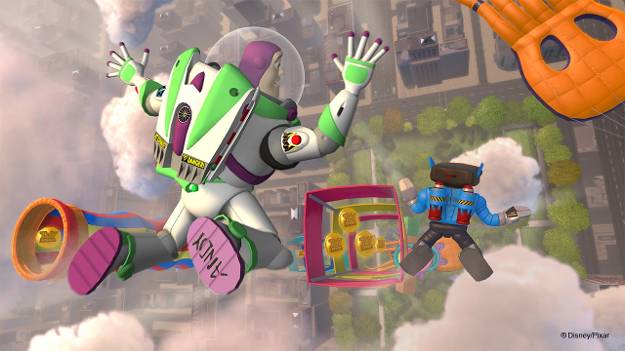 There are no characters to interact with, but since you couldn't punch them in the first game, that got old fast. The interaction with the Pixar characters happens in the game levels themselves, which to me is preferable.

The areas in the park are themed from Cars, Up, Ratatouille, Toy Story, and the Incredibles. I'm trying to avoid the 'minigame' description, because the game worlds are simplified action-adventure levels or driving tracks, as opposed to 'match the shape' or 'copy the moves' things. Each movie tie-in area has unlockable levels, characters and items, and if you complete all three levels in an area, you unlock achievements as well.

I would have preferred some variety in the types of games on offer, just because my niece got frustrated with too many things being beyond her. Other than the Cars levels, which are, unsurprisingly, driving levels, everything else is some combination of running, jumping, swimming and flying.

Overall it felt meatier than Disneyland did, gaining in core gamer respectability what it loses in accessibility to younger kids. Core gamer appeal actually matters, since kids my nephew's age have already discovered Smash Brothers, Skylanders, the Lego games, and Just Dance, and you need something pretty compelling to tear them away from stuff they already know they like.

The nice part is that if you take too long on a given challenge, you get the option to skip it. This is helpful, because Kinect games don't let you help younger kids through the tricky spots. Some of the puzzles are downright frustrating, especially since they wouldn't let me throw batteries at Woody's head while he was nagging me to hurry up. My nephew approved of the effort, however.

Points are allotted by a combination of how long you take (Stupid Woody is right about that) and how many coins you collect on your way. Your performance is ranked bronze, silver or gold depending on how well you do, and a cumulative total unlocks new levels, and new ways to play levels you've already completed. Usually I managed silver on my first try. Getting gold takes practice. 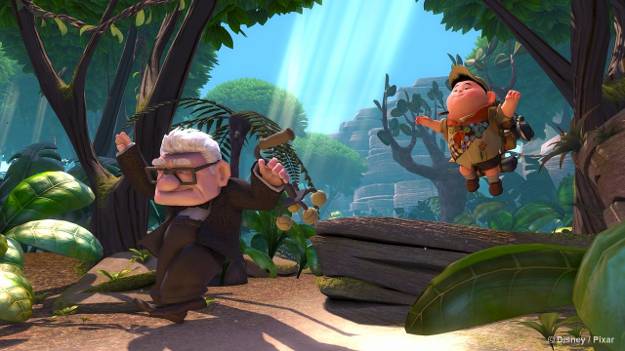 Pixar Rush is big on encouraging and praising imagination. That's good. However, the "You're the best thing ever! Wasn't that great!?" congratulatory scenes take way longer than they need to. I thought at first that my annoyance was cynical, but my nephew got bored too.

There are also some glitches in how Kinect scans details and movement. Some are hilarious, some downright frustrating. The lighting in your room has to be perfect, that is, light that isn't at all easy to get. Sunlight is too bright, but interior halogen lights are too dark. Kinect scans my hair the right color, but seems to think I'm an East Indian girl. When the room was light enough to detect my niece and nephew with the accurate skin color, their hair scanned brown. It was video game Kick a Ginger day. The character creation and sign in elements are the worst part of an otherwise responsive experience.

I found it was, overall, better to err on the too-dark side: with the windows in the room open, the game wasn't reading my jumps. Turning is clunky, and strafing seems impossible except when you're trying to stand still on an object. Unintentional double jumps also happened me with annoying regularity. Since this apparently only happened to me, it gave my husband numerous opportunities to make boob bounce jokes.

Also, note to parents: don't stand in the background to watch the kids play. If you move at all, the Kinect will think you're someone joining the game, and may kick your kid's profile out in the process.

So, warts and all, it's a Kinect game. It also does seem optimized to the way kids move, so the important thing to me is that my nephew could get it working, not my awareness that I could do so much better on the platforming levels with a controller. Oddly, these issues seem more pronounced in two-player mode, perhaps because the co-operative elements require extra precision. It's a lot more fun if you ignore the clock and goof around.

At the end of the play session, my nephew gave Kinect Disney/Pixar Rush a "one hundred million out of ten". He also talks about it every time I see him, making sure I still have it so he can come over and play it. So on that scale, I can confidently endorse it. Just don't expect perfection.