Kameo: Elements of Power is a action game developed by Rare for the Xbox 360. The game was released on November 22, 2005.

When the GamingExcellence team went to X'05 in Toronto, Canada, we noticed that the game with the most playable stations (and with the most visible presence) was Kameo. This was no big surprise considering that this was one of the three Microsoft published titles at the event. Read More. 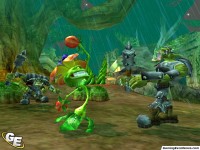