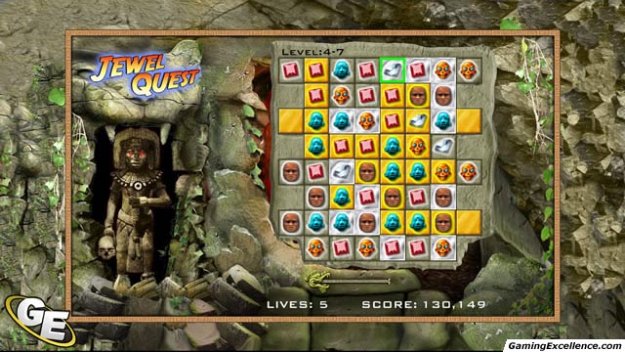 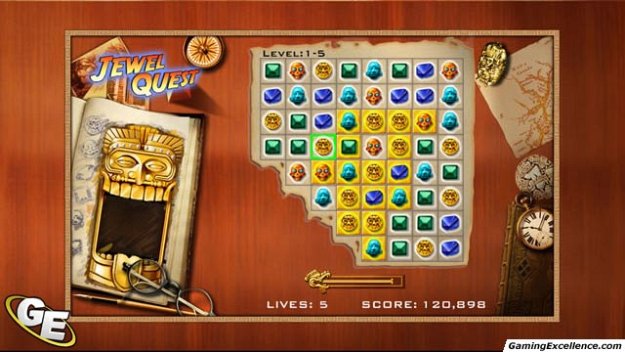 Redeveloped by iWin.com for Xbox Live Arcade, Jewel Quest is simply a Bejewelled clone that will set you back eight-hundred Microsoft Points. This title has twelve achievements, all pretty much acquired by beating the game four times over. The tag line will have you believe that this is a "unique new take on the classic-style matching game", and according to the official Xbox description, you'll rearrange valuable relic jewels to turn sand tiles into gold, "venturing" deeper into the jungle and "exploring" the ancient ruins of Mayan civilization while "discovering" hidden treasures and priceless artefacts. Apparently you'll "earn the respect of your fellow archaeologists and collect oodles of treasures and jewels" too. Ha, nice try!

Anyone familiar with Bejewelled will feel ripped off after buying Jewel Quest. But given time this will pass, and then change into addiction. Yes, it is a clone. No, it does not have a story line. Yes, it does a good job at being a clone. No, you will not allow you to "explore the ancient ruins of Mayan civilization." Yes, you'll get over it.

Since they're almost the same game, I shouldn't need to explain how it works, but that makes for a stingy article and thus we move on. Players advance through stages by moving around jewels to try and match three or more in a row or column. When lined up, the icons magically disappear into points and gold plates. This gold plate and the rest of the board is then filled by the next wave of jewels that fly down from the top of the screen. As more blocks fall, mostly fluke combos can be triggered. Switching jewels in pairs, the move must result in a three or more matching up, or the move is cancelled and the jewels are put back in their initial positions. Not completely unoriginal, Jewel Quest does differ from Bejewelled in a couple of ways. First, the goal of each stage isn't to reach a certain point value in a set time limit but rather to turn all the squares in the grid into gold plates. Accomplishing this ultimately requires that you match up jewels over every block in the grid.

Obviously you've acquired enough know-how thus far to realize that Jewel Quest isn't the deepest Xbox Live game available, especially for 800 Microsoft Points. The game features offline single player, leaderboards, and that's all she wrote. No marathon mode, special matches, online battles with friends, no T and A, no explosions, no Monkeys, no nothin'. Five main levels, each with several sublevels (deep within the Mayan Jungle), and that is it. But, despite the amount of text taken to describe the mode, it will surely take hours among hours to swap your jewels around in the proper order. Of course, it's not about just lining it all up to paint the town gold, you've got to do it quickly! Time is ultimately your worst enemy. But luckily lives are replenished by reaching score way-points. Each sub-level presents a different shaped grid, changing all the grid squares to gold causes the artefact on the left of the screen to light up. Once the artefact is entirely lit up, you guessed it, the level is complete.

Sound effects in Jewel Quest are few and far between, mostly just blips and dings and a splash of mumbo jumbo music and chanting (those crazy Mayans!). Personally, I feel the level of quality on Live Arcade games is quite low right now, especially with regards to eye candy. Jewel Quest looks like half-eaten Sloppy Joes. Proceed with drawing your own conclusions. The simple controls are mind-numbingly repetitive, with hours of moving a pair of jewels, hitting the A button to swap them, and then moving to another pair of jewels.

In the end, it's still a solid puzzle game. So if you've got the points, and you're bored of Bejewelled, check out Jewel Quest.