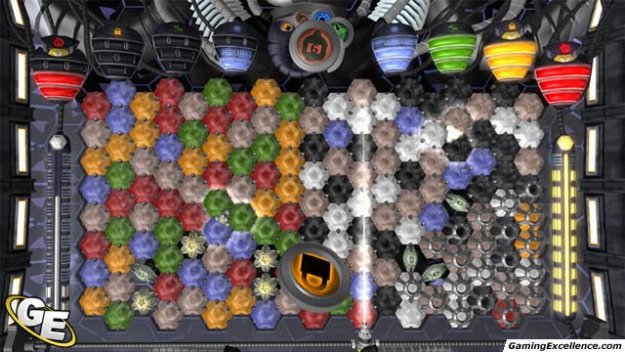 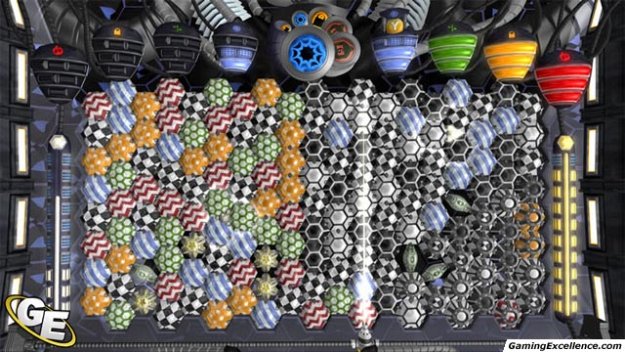 From the creator of Tetris, Alexey Pajitnov, comes another addictive puzzle game called Hexic 2, an upgraded version of Hexic HD that shipped with the Xbox 360. This game strangely looks like Bejeweled, the latest puzzle game phenomenon, but Hexic 2 requires you to rotate clusters of hexagons, rather than swapping jewels in a square grid.

The screen is filled with hexagons in various colours and the goal is to for a cluster of at least three of the same colour. Once the cluster is formed, they'll disappear and more hexagons will drop down from the top to fill the void. You move your cursor around to highlight the cluster that you want to rotate. Pressing A allows you to rotate clockwise and X is counterclockwise.

To make things interesting, there are other ways to get rid of pieces. If you manage to form a hex circle of six pieces with a different colour in the middle, you will get this new piece called a Starflower on the board that will allow you to rotate the hex circle that surrounds it. Also, if you line up five pieces in a row, you'll get an Emerald which looks like a tube that lets you swap the two hex pieces that it touches. Now if you're really good and can create enough Starflowers for them to form a hex circle, you'll have what is called a Black Pearl. The Black Pearls allows you to rotate the three pieces that it touches. The other piece you can try to get is called a Ruby. You get this item if you can line up five Starflowers in a row. It takes quite a bit of skill to form some of these special pieces, but they can come in handy. Other than helping you find new ways of creating clusters, you can also hold the B button and blow up these special pieces to take out the pieces that they touch.

There are several modes of play if you're playing solo: battle, marathon, timed and survival. With three levels of difficulty, the computer doesn't really go easy on you unless you're playing in beginner mode. The speed at which the computer goes on expert makes me wonder if it is even humanly possibly to move your cursor that fast using the Xbox 360 controller. Battle mode is where all the fun is and you can also play locally with a friend or through Xbox Live. The screen is split down the middle and each player has a gauge to the side that fills up as they clear out coloured pieces. At the top of the player's screen are coloured wells. These wells will fill up when you clear that specific colour and each well corresponds to an attack you can do to your opponent. There's a bomb where you can drop onto your opponent. If they don't clear it out, their gauge will go down and yours will go up. There is also the ability to push that middle line to give yourself more room and shrink your opponent's playing field. One of the wells can lock pieces on your opponent's side, like in Survival mode. The last ability isn't really attack but you can also clear your own field. Using these attacks is tricky, as it takes away your focus on clearing your clusters.

Other than Battle mode, the other three modes are similar to Hexic HD where Marathon you can play forever, as long as you diffuse the bombs that come your way and you win the game by creating Black Pearl clusters. If you're having problems creating one, you can imagine how difficult it must be to have to create three. Timed mode is the same idea, except you have a countdown. Survival is 50 levels of Hexic, but pieces that are leftover from each level are locked until you get rid of them by creating a hex circle or five in a row.

After playing Hexic 2, it's really hard to go back and play Hexic HD. The graphics have been jazzed up so it looks clear, sharp and has this futuristic feel to it. The music isn't as catchy as the Tetris theme song, but it complements the game relatively well with the electronic beats. For those who may be colour-blind or prefer a different type of visual differentiation, you can change the settings so that you have patterned pieces to make the more distinguishable. Hexic 2 is worth checking out especially if you have friends that are also competitive puzzle fanatics.