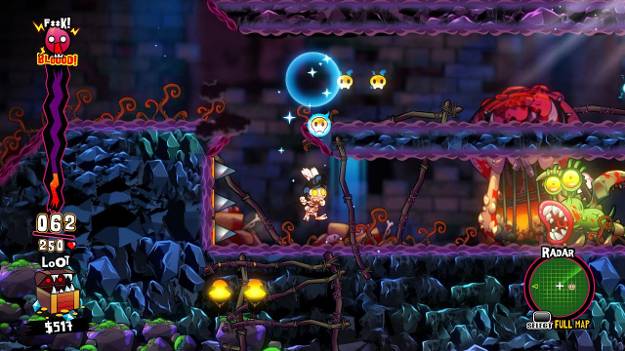 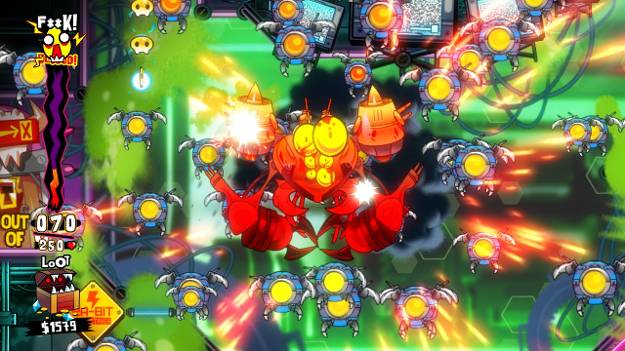 Out of the entirety of E3, Hell Yeah! Wrath of the Dead Rabbit came as perhaps my own personal most surprising title of the show. In it, you play a prince of hell who's been caught with naughty pictures of his rubber ducky in the bathtub. Not entirely sure what he's been doing with said ducky, but the pictures, once posted online, are bad enough to hurt his reputation. One hundred fellow Hell monsters view these pictures, and our (hero?) protagonist decides to hunt them down and murder them for their insolence.

I started the demo out without any weapons and having to platform and maneuver my way through a traditional 2D level while avoiding enemies. After travelling for some time, I found a rotating blade that I rode inside of that completely obliterated all the basic enemies, spikes on the ground and solid blocks of gems that stood in my way and provided money as soon as I collected them. But after a short while, I was presented with one of the monsters who'd viewed my online pictures. I had to use my rotating blade to cut into their bodies. 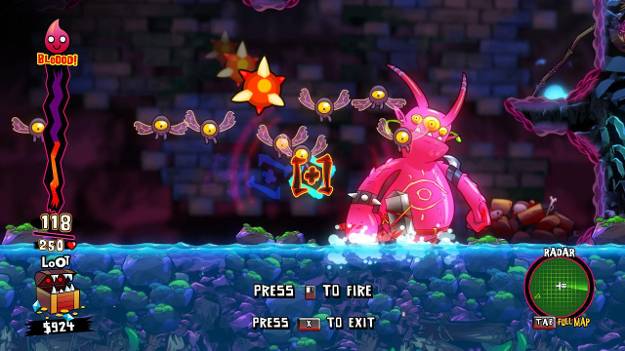 Now here's where the game got pretty awesome. I was already enjoying the older style platforming style (that totally reminding me of fun times playing my Genesis). I was already enjoying the bright, vivid graphics with totally wacked out background and character designs that reminded me of Earthworm Jim in hell. But the game really won me over by waiting until I'd hurt that monster enough, giving me a button prompt to 'Squeeze It'(with that monster in between my nasty dead rabbit fingers) and then splattering him all over the screen in a mess of blue and purple goo.

Each of the monsters that I took down all had their own individual death sequences, with one of them being annihilated with carrot missiles that were flown at him from my character's body. It was pretty awesome. The controls were very simple, the graphics were demented and the entire game reminded me of some of the best gaming experiences I had back in the days of early Sega. I loved it, couldn't stop playing it when I was in front of it and can't wait for it to come out. Oh, and they give you a jetpack. And a chainsaw. And a rocket launcher. And who knows what else, but I am very excited. Hell Yeah! Wrath of the Dead Rabbit will release for PS3, Xbox 360 and PC at some point this year. Watch for it!