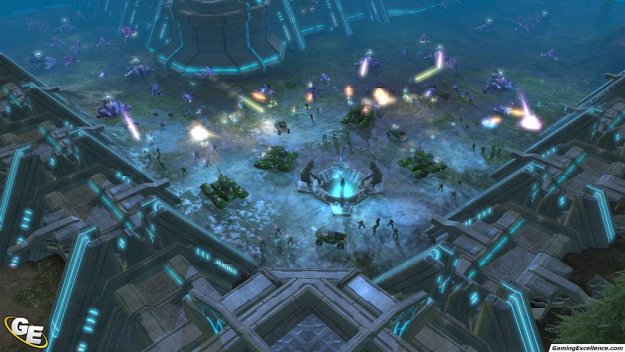 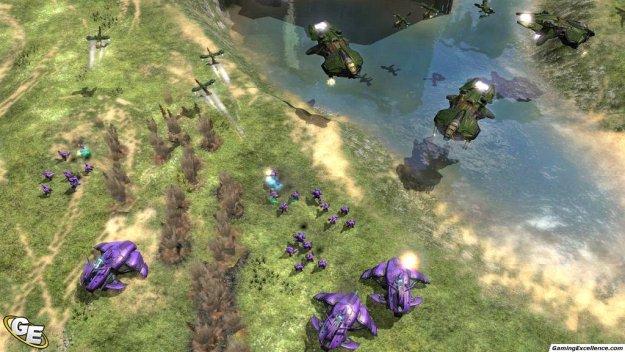 Halo Wars is the final game from famed real time strategy developer Ensemble Studios. Though the company will always be remembered for their Age of Empires series, Halo Wars is a fitting farewell for the company. Set in Bungie's ever popular Halo universe, Halo Wars is a real time strategy game that foregoes the first person view of Master Chief in favor of some good old fashioned, army leading action. Though it's not a revolutionary RTS by any means, there is definitely some fun to be had here, especially for Halo fanatics.

Halo Wars is a real time strategy game, which means that if you only enjoy the Halo games for the run and gun style gameplay, then you may want to steer clear. If you've ever played a Command and Conquer game, or any of Blizzard's RTS's, then you know what you are getting into: managing resources, controlling heroes, and building armies. Halo Wars uses all of these standard real time strategy conventions to good effect, mostly because Halo Wars is an extremely accessible RTS. In the campaign, objectives are rather straight forward, and there aren't any uber complicated strategies to scare off new players. In fact, Halo Wars would be a great first choice for someone looking to get into real time strategies. Ensemble does a good job of mixing up the campaign objectives though so that even experienced RTS players will get some enjoyment out of the game.

Of course, if you are looking for a really deep RTS to sink all of your time into and are trying to develop a perfect strategy for, then this game isn't for you. If you are a Halo fan, however, then that is of course the biggest draw of the game. From the feeling of how a warthog controls, to the sound of a plasma grenade exploding - this game is pure Halo. It has outstanding production values, as Ensemble has recreated the Halo universe in a new and fresh way that offers a new perspective into the futuristic world, yet still maintains that feeling that you are playing the original Halo trilogy…except instead of looking through Master Chief's eyes, you are watching it from the sky.

Halo Wars in fact takes places 20 years before the events of Halo: Combat Evolved. In the campaign, you'll follow the story of Captain James Cutter, Sergeant John Forge, and Professor Anders, all residing members of the UNSC (United Nations Space Command) ship, The Spirit of Fire. They're hot on the heels of the alien Covenant, led by the Prophet of Regret, and the ever fierce Arbiter, who are in search of an ancient Forerunner technology. I was a little disappointed that the story didn't have more to do with the other Halo games, but it at least fits accurately into the story cannon, and introduces some new, interesting characters that aren't Spartans. The best part about the game's story is how it is presented, and that is primarily through the cut scenes at the beginning of each mission. These cinematics are nothing short of breathtaking, and are almost worth the price of admission just to watch. Halo 4 could definitely take a page out of Halo Wars' book here.

The unit selection in Halo Wars is very impressive, considering the source material. Every vehicle found in Halo 1, 2 and 3 is included in the game, as well as some new creations. Units are upgraded through various buildings, from giving more powerful weapons to your Spartans, to upgrading your warthog's chain guns to gauss cannons. There is a large selection of infantry, land, and air vehicles, and the UNSC and Covenant have very different, unique units. Each faction also has several heroes, which if you are UNSC, gives a unique unit, a bonus, as well as a special power. Covenant heroes don't have a special super power, but are actual units you can control on the battle field.

The campaign doesn't take too long to beat, but there are incentives to go and play through it more than once. There are black boxes hidden in every map, and when found, divulge Halo lore that will make Halo nerds jump for joy. There is also the standard easy, normal, heroic and legendary difficulty settings, and true to the Halo series, beating the game on legendary will unlock a secret ending. The entire campaign can also be played through co-operatively with a friend over Xbox Live, which is, of course, tons of fun.

It would have been nice to have a Covenant campaign as well, as it would have added some much needed meat to the single player game, as well as introduce players to the games only other race. Only two playable races in a RTS seems sort of archaic in this day and age, and is a big disappointment in Halo Wars, especially since the Flood, who play a prominent role in the story, could've been a very viable third race. I'm not sure if Ensemble was looking to get rid of the Rock-Paper-Scissors type game play sometimes found in real time strategies, but only having two races definitely takes more away from the game then it adds.

Once you're done with the campaign, the multiplayer more than likely won't hold your attention for too long. Apart from only having two races, there are other drawbacks that put other RTS's ahead of Halo Wars. The maps are mainly small, which encourage the rush. The unit cap is also relatively low, which means that armies aren't allowed to grow too large. Both of these factors encourage players to engage the enemy as quickly as possible, and eliminate strategies that are popular in other real time strategies. The tradeoff for the accessibility of Halo Wars is its lack of depth, which results in mediocre multiplayer that isn't very engrossing.

The surprise about Halo Wars is that the controls aren't one of the contributing factors to the weakness of the multiplayer, or the overall game for that matter. Real time strategies for consoles have been notoriously subpar when compared to their computer counterparts in the control department. Halo Wars, however, uses a simple, fluid control scheme that is probably the best found yet in a console RTS. It's not quite as good as a mouse and keyboard, but it's close, and probably as close as anyone will get. The great controls add to the accessibility of Halo Wars, and will attract RTS vets who think that console real time strategies are impossible.

The graphics in Halo Wars look clean and sharp, and even with the bird's eye view, you can pick out and identify each individual unit. The biggest standout in the graphics department is, of course, the cut scenes. The frame rate sometimes dips when a lot is happening on screen at once, but is otherwise stable. The audio is equally impressive. Its soundtrack isn't quite as epic as Halo 3's was back in 2007, but the sound effects more than make up for it. The roar of the warthog's engines, the plasma laser's fired from banshees, the dying screams from defeated grunts - the sound effects are great. The sound really helps sell the Halo vibe, and is a great inclusion.

At the end of the day, you have to ask yourself: would Halo Wars be as good as it is, if it wasn't for the Halo name? The answer is probably not. Though it has great controls and is user-friendly, it's lack of depth and short campaign doesn't warrant too much praise. However, the high production values that come along with the Halo name are what make Halo Wars above average, if just slightly. The campaign does have quite a bit of replay value with collectibles, several difficulty settings, and optional co-op, but the multiplayer won't keep you occupied for quite as long. Even so, Halo Wars is fun while it lasts, and whether you are a RTS fan, a Halo fan, or both, you should check it out.