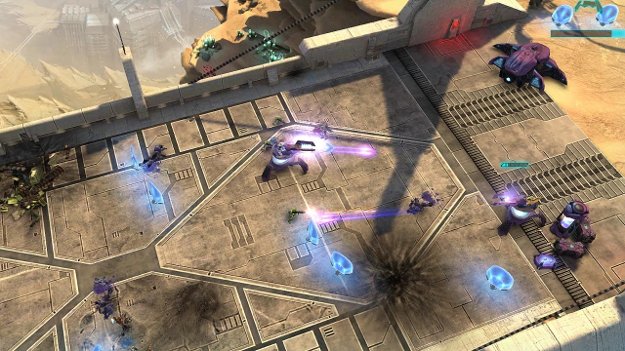 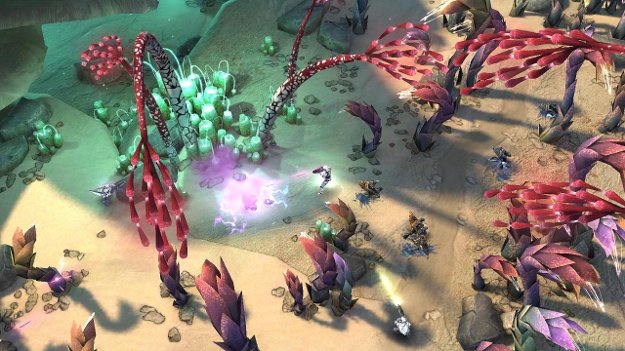 Mobile games are supposed to be fast-paced. Twin stick shooters are frantic and fun. These two elements alone could be the makings of a fun game, but toss the Halo license into the mix and you get a pedigree universe topped on a frantic top-down shooter. 343 Industries and Vanguard Entertainment have made a title that is fun to play and quite easy to pick up.

A Halo game has been known to be quite-fast paced. The story runs you from checkpoint to checkpoint at breakneck speed while you lay waste to Covenant forces. That feeling is translated very well in Spartan Assault. You are giving several objectives to complete during missions that have you darting from point to point on the top-down map as you plow your way through the Covenant. Missions are quite frantic and are pretty short-length; quite substantial for its mobile origins. They don’t drag on aimlessly and it gives each minute of play purpose. None of your time feels really wasted when going through a mission. There was never a lull to moments as I had to dart from firefight to firefight. Spartan Assault always kept me moving. If there was a downside to the gameplay, it had to be that there were no checkpoints to missions. It got frustrating when I would approach the end of a mission, suddenly die and be forced to have to replay it all over again.

And even with its quick feel, Halo: Spartan Assault doesn’t skip on the story. The setting of it is actually a framing device as you play a Spartan playing a simulator of historical battles against the Covenant. Inside that game, you take on the roles of Spartans Davis and Palmer as they took on Covenant forces trying to uncover Forerunner tech. In between the six chapters you will undertake, the story is told by beautiful rendered cutscenes brought to life like a motion comic book. While short, the story still has some pretty good story moments that still tugs a bit at the heartstrings that you have experienced while playing other Halo games such as Reach. Near the end of it, I was moved by one such scene that I even had to watch it over and over because I found it so encompassing.

Everything about this game makes it feel like it truly belongs in the Halo universe thanks to the multitude of weapons you will pick up and utilize. Like its first-person counterpart it was spawned from, Spartan Assault’s weapons have the feel of the iconic weapons we have used in Halo games before it; this time translated to fit with the twin-stick shooter feel. The magnum pistol doesn’t fire all that fast, but can take down a grunt with a single it. A Plasma Repeater is fast firing and takes down shields of Jackals very quickly, and a Needler will make quick work of Elites with its super-combine explosion. You will easily find yourself frantically switching between weapons finding the right one for the firefight you are in. There will also be missions where you will take control of Scorpion tanks and even hijack Covenant vehicles for use. The Halo pedigree is kept very much intact for not being its staple first-person self. 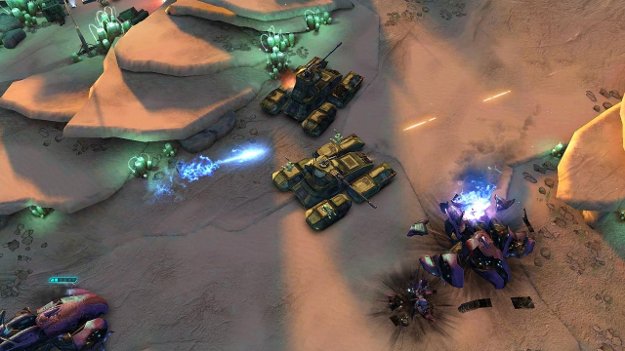 From its mobile-counterpart, micro-transactions also have made their way to the console version. These come in the form of purchasing upgrades for your Spartan during a mission. These can be bought either through gaining XP from completing missions or the above-mentioned real-world money. These type of purchases are really only superficial to the game. Whether you decide to use XP or your own money to purchase these upgrades does not change the fundamental principles of the game. You will still have the same enjoyment without them. Buying these upgrades only makes you a little stronger and doesn’t make this game a “pay-to-win” game; a tag that many gamers wrongly place on games.

Spartan Assault handles really well on console. The controls for it are very responsive and the twin-stick shooter aspect of it gives off a very arcade feel for it. Gamers perhaps not use to this genre might have a hard time at first aiming as trying to nail a Covenant across the screen might get difficult if your movement of the right stick, which handles aiming the weapon is off a bit. That is only a minor grievance and in no way acts as a detriment to the game.

Halo: Spartan Assault is a good addition to the Halo universe of games. It is a fun change of venue to the standard action that we usually receive with a Halo title. The action is very quick-paced; fully embracing its arcade-style and the story is worthy the series expanding the Halo lore between 3 and 4. However, it would have perhaps been a bit better if missions came with checkpoints for missions rather than forcing players to start over when they die. If 343 Industries wants to make more of these kinds of titles, I would not object to it.