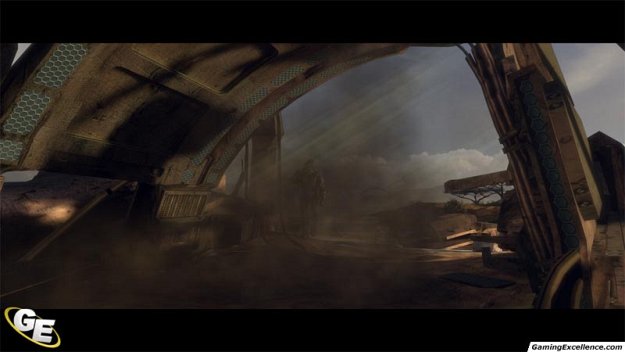 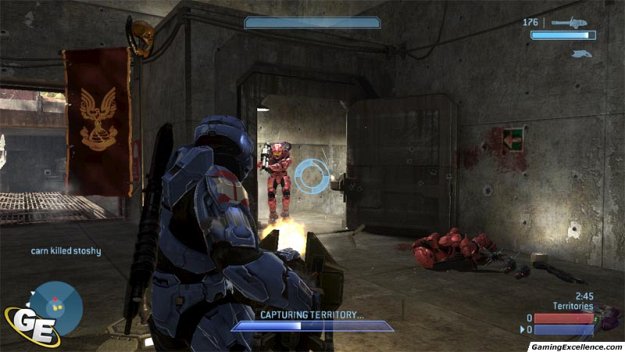 Halo, the game is among only a small handful that is widely recognized by both gamers and non-gamers alike. The game commends respect, not necessarily for its technical achievements, but for its massively popular culture and global success. There's no arguing that the single player portion of the Halo series has in the past, been nothing to write home about, but the online modes and various multiplayer options garners it the success that the franchise has achieved.

There's no arguing that Halo and Halo 2 are phenomenal LAN party games, though I can say I always found the Xbox Live component to be less compelling. It's possibly the impersonal nature, the fact that everyone is seemingly unimportant and just another frag. On the other hand, it could be the excessively annoying tricks and dare I say "cheap" maneuvers and tactics that you'll find a lot of Halo players tend to use online. Constant strafing, bunny hopping, finding little glitches in the collision detection and exploiting them, or quickly picking up the most powerful weapon in the map and moving to a high point where it's incredibly difficult to kill them, I've seen it all. These are the areas where I'd love to see Halo 3 really pick up the slack of the series, and from the experience I've had thus far Bungie hasn't really addressed any of these issues.

For gamers, the Halo franchise is very much a love or hate affair. You'll find players who spend endless hours online, learning every inch of every map, and best places to hide or ambush. We recently had an early opportunity to step into the anticipated Halo 3 beta, and the good news for fans of the past, Halo 3 plays near-identical to it's predecessors with a few improvements. With that said, it really feels like a pretty version of Halo 2, and for those looking for the "next-generation" of Halo, or a completely new game altogether, you won't find it here, keeping in mind that Bungie does still have many months of development and tweaking to go. Another aside, the amount of polish considering this is a beta release is quite impressive, load times are fantastic, multiplayer matchmaking has never been better, and the game's graphics engine runs at a very solid framerate even during the most intensive battles.

If you haven't already hopped online, you're probably wondering what the beta has to offer. For starters, you'll find three maps (Snowbound, High Ground, and Valhalla), ranging from close combat with heavy cover, to a larger more open map best suited for sniper rifles. In between, Snowbound is a semi-open map with a few underground tunnels. You'll also find an assortment of weaponry at your disposal, much of it familiar from past Halo titles. Fortunately, some of the balancing issues have been addressed, for example the needler can actually pack a punch this time around. There is definitely less emphasis on duel wielding in this incarnation as well, as that was really the only way to go in Halo 2. The game also introduces new equipment like bubble shields (which are deployed using the X button, the mount/dismount has now moved to the right bumper), which adds a new strategic element to the game. For example, bubble shields can be a great asset, as they provide instant cover if deployed in a firefight.

In terms of modes, the multiplayer beta offers rumble pit (traditional slayer), team slayer, team skirmish (which is objective oriented, like capture the flag), and big team battle, which is only playable on the largest map. The game seems to cycle through a few combinations of maps and weapons, one of the most interesting (and enjoyable) combinations I've seen thus far is rocket launchers on High Ground. And, as to be expected the games were typically pretty short in those rare cases.

One of the major improvements we've seen is in the matchmaking system over Xbox Live. Halo 2's matchmaking was no slouch, but this is quite frankly one of the best I can ever recall. The game searches for opponents based on a variety of criteria (skill levels, connection speed, etc), and this is a quick and very streamlined process. If you don't like the map, players can veto it with a simple button press, with a majority the game will switch to a different map. The online matchmaking is quite different from other online shooters, the lobby style where you select a specific game from a list isn't in the beta, however it does allow for private and public games (and private games wherein you can use public spots if you're not completely full, where it keeps the group of private members together between rounds).

The biggest improvements are undoubtedly in the graphics engine, the game shines in high-definition with new high-resolution textures and vastly improved models. Environmental detail is well-captured, watching the grass sway or the water ripple as you walk through the shallow river. Amazingly enough, the games framerate is very respectable and rock solid, even in the most heated battles. Combined with an enhanced physics engine that offers up ragdoll effects when you get fragged, and some other noticeable improvements in movement, and it's evident these are the areas where Bungie has concentrated their efforts.

The last major new addition worth noting is the ability to save replays of your matches, and view them from the perspective of any player. This allows you to learn a few secrets and pick up a few tips and tricks, and is a neat little feature. In the beta, it's only possible to view the replays from a first person perspective, but we've been informed that the final build will offer the ability to move the camera around the battlefield from any angle as you choose. Lastly, you can share these user-created videos among your friends and opponents in the Halo 3 universe, a nice touch.

Given that the game still has many months of development ahead, it's hard to make any really accurate predictions about the final product, but from what we've seen in the Halo 3 multiplayer beta, it's going to play very similar to past iterations. Bungie doesn't seem to be moving away from their previously successful formula much at all, and have taken a very safe approach to the final chapter in the Halo trilogy. For fans of the franchise, it's definitely more of the same, for others who were hoping for a change, we'll just have to wait and see.