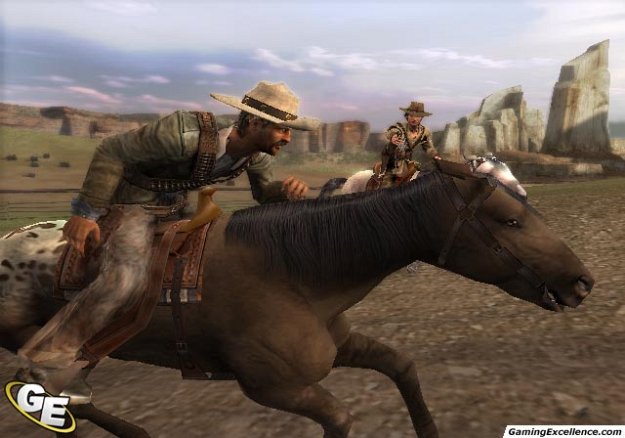 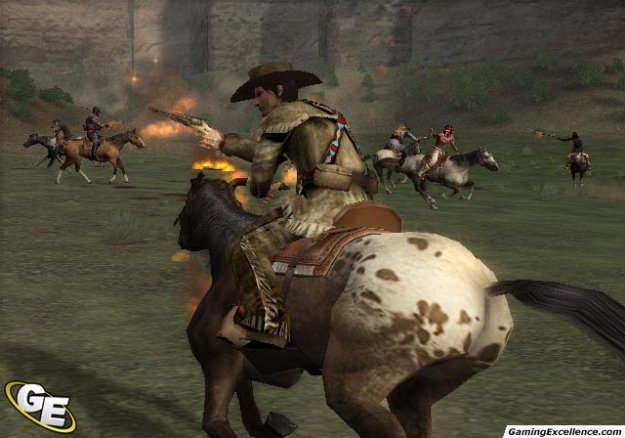 Since 1980, Kenny Rogers has managed to star in five Gambler movies while the videogame industry has yet to produce one great oater epic. While there are so many things wrong with that first sentence, Neversoft has finally set aside its Tony Hawk series to make the definitive western videogame that anyone can enjoy. Furthermore, with the release of the Xbox 360, we've seen many visually amazing titles surface, but few innovative ones. Gun changes that mindset too and proves that you don't have to look all flashy to give next-generation titles a run for their money.

Gun is, at its core, a simple tale in the telling, but like many classics, one that stays with you for a long time. What sets it apart from so many other games (and movies) is that it has characters anchored in reality. The old West was a gritty, brutal place and Gun's portrayal is spot on. From its dialog which can get disarmingly seedy at times to its violence level which is disturbingly un-politically-correct in our day and time, Gun's realism and depiction of the late 1800's is unwavering. The characters are not glamorous, their situations are never pleasant, but you form a kinship and instant attachment to them and actually want to help them out of their predicaments.

The tale really begins on a riverboat where trappers Colton White and his father Ned unwittingly become part of a shootout that sets the entire story in motion. By the time the smoke has cleared, Ned will be dead and Colton will have to face the fact that maybe the man he knew to be his father really wasn't. Colton will then find his way to Dodge (and the Alhambra saloon/brothel) where a woman named Jenny may hold answers to his questions. Before everything is said and done, Colton will have killed his fair share of evil men and perhaps found salvation in the least likely of places. Written by Hollywood storyteller Randall Jahnson, Gun is truly a tale worth playing through more than once simply for its wonderful story, dialog and characters.

As Colton, you'll have access to a wide variety of gameplay mechanics and mission types. Luckily, the controls are always intuitive and easy to use. On foot, besides the expected crouching, jumping, melee attack, shooting, reloading mechanics, you will have access to Quickdraw Mode which is Gun's version of Max Payne's Bullet Time. In Gun, however, engaging Quickdraw Mode draws the camera in close (from your gun's perspective) and a flick of the left thumbstick cycles through your enemies. Time slows in this mode and you can still use the right thumbstick for added precision (and headshots) and finesse, which will also help you refill your Quickdraw Meter that much faster.

Not only will you have access to a bevy of weapons ranging from pistols, rifles, shotguns, knives, bows and sharpshooter rifles, but all the weapons are upgradeable as are your skills at using them in the game. This makes taking on side missions a lot more fun since each one generally increases more than one skill and pays you enough to purchase one of the 30 upgrades available.

Even if side missions didn't offer such necessity, they are so well thought out, implemented and fun that they would be easy to get into. Everything from ranching, mining and hunting to taking on Pony Express missions (delivery type missions on horseback) is fun. In most towns you can also get missions from the sheriff which generally revolve around running scum out of town or dealing with angry mobs, gamblers, hold ups, etc. There's even a full-fledged Texas Hold 'em poker game that you can play (and cheat at) to gain money.

One of the quintessential western trappings, besides gunplay, has always been horse riding. And Gun doesn't shy away from this facet in the least. At any time, you can mount a horse to get you wherever you like. Surprisingly to most, the horseback aspect is deep and expertly implemented. You can jump obstacles, spur your horse on for extra speed, rear up/skid your horse for trampling attacks and you also have the ability to fight while mounted. Where other game feature very rigid horseback mechanics that feel wooden and unnatural, Gun's horse-riding is fluid and fun. Besides, it adds a completely new dimension to fighting when you can simply run over your opponents.

Gun also allows you the freedom to do what you want, when you want. Using the map interface, you'll always know where the next story mission takes place and where all side missions are. In this respect, Gun feels very open-ended, even though this isn't really the case. While you'll always have the choice to do what you'd like at any given time, you won't always have access to every aspect of the game at once. Gun does this to maintain its story-telling pace and it never feels too rigid or demanding. The stats menu is also a fun place to check out more stats than you'll care to know about and also your character's skill/upgrade progression in the game.

Graphically, Gun and Tony Hawk on the Xbox 360 share a lot in common. Neither is truly a next-generation looking title nor does either tries to be overly flashy by going for a completely photo-realistic look. Gun is clean looking with excellent textures, but appears very dark in certain areas (generally characters' faces) due to the sun's positioning and shadows. When compared to the PlayStation 2 and Xbox builds, the 360 shines, but when compared to Perfect Dark or Madden (which are completely different games anyway), Gun looks a little cartoony. Still, Gun conveys a lot through its artistic choices and manages to nail the western look and feel perfectly. Entering any town in the game, you truly get a sense of how the west must have looked like.

Even though Gun's story and gameplay are beyond reproach, it's the audio that truly steals the show. Besides having a who's who of Hollywood voice actors really giving Gun a sense of authenticity, all the lines also feel believable. Some characters speak with panache while others appear a little less educated and smarmy. Some lines are hilarious while others strike a chord with their brutal honesty. The music in any given situation is perfect and really sets the tone and mood for Gun.

What really sets Gun apart from anything released in the last little bit is how effortlessly it seems to present itself with authenticity. The game may not be too hard, the graphics not as next-gen as anyone would hope, no multiplayer to speak of, but regardless, Gun is easily one of the best titles released on the 360 (or on any other console for that matter). Mature gamers looking for something truly different (and well made) should not hesitate at all in picking up Gun. If you have a choice, definitely choose the 360 version, but Gun should be played and enjoyed more for its story, characters and mechanics and not its graphics. Neversoft may not wander too often from its bread and butter franchise, but if Gun is any indication of what they're capable of in between Tony Hawk games, one can only hope they stray again very soon.