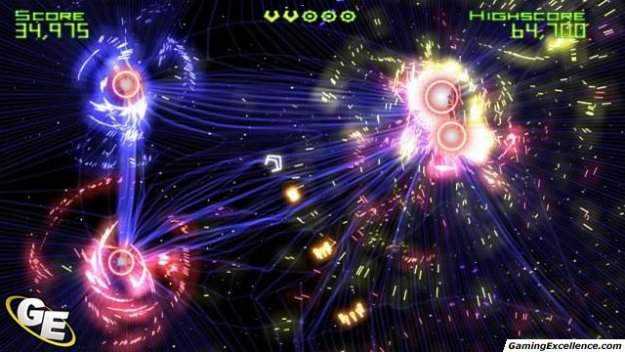 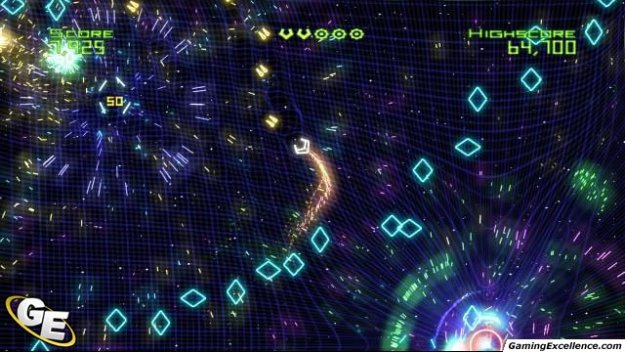 One of the fun surprises many found while playing Bizarre Creations' Project Gotham 2 was a nifty little arcade game located in the garage called Geometry Wars. Easy to play but hard to master, it was sometimes possible to waste an hour or two simply playing this mini game. Now, Bizarre Creations gives us the amazing sequel (and throws in the original for good measure too) and the results are equally as time consuming. And while it may seem like a silly, shallow game, it remains ultimately addictive and competition on Xbox Live's scoreboards is ferocious.

The concept is simple; move you ship around a playing field using your left thumbstick all-the-while avoiding enemies and shooting down as many as possible. You can move your ship in any direction and using the right thumbstick, you can simultaneously fire in any direction as well. The catch is simply that the board fills up quickly with faster and more dangerous enemies and soon you will find yourself piloting around like a mad-man trying to shoot in every-which-direction just to create breathing room. Luckily there's a bomb button that enables you to clear the screen entirely, but this usually only gives you a moment's respite.

The gameplay itself is simple, elegant, engaging and fun. While there are only two modes included (Evolved - the pretty one, and Retro - the PGR2 version which feels a little slow and clunky in comparison) you will still manage to lose hours on the Evolved mode alone. And once you finally throw in the towel, you'll come back later simply to beat that one person on your friends' list that simply must rack up high scores in every game he plays.

Bizarre Creations has not only crafted an eye pleasing game that plays fast and features amazing visuals (which are very reminiscent of Fantavision's firecrackers) but they've managed to create the best sounding Live Arcade game yet. True, the songs may be limited (but oh so catchy) but the true piece de resistance is when a bomb is used and the entire sound gets muffled by the nuclear-like wave of sound for a few seconds before returning to normal. Sure, it may be a small little touch, but one that is always fun to hear (and absolutely never gets old).

Between the two modes, Evolved is where you will spend all your time. The playing field is larger (and as you move your ship, the surface moves around to compensate), the gameplay is faster, the songs are better, the sound effects are a blast and the visuals are smoother and a millions times more colorful. This is not to say that Retro won't get its fair share of playing time, but Evolved is clearly where the game is at and you'll see that while Retro was fun at the time, it's hard to go back now and play it with as much enjoyment.

In the end, Geometry Wars is simply a game that will appeal to everyone on Xbox Live. It's fast, it's mindless, it's fun and it's addictive. While I prefer Mutant Storm and Astropop, I can't deny the fact that everyone I know has Geometry Wars and getting a top score among my friends is reason enough to play it repeatedly. Highly recommended.