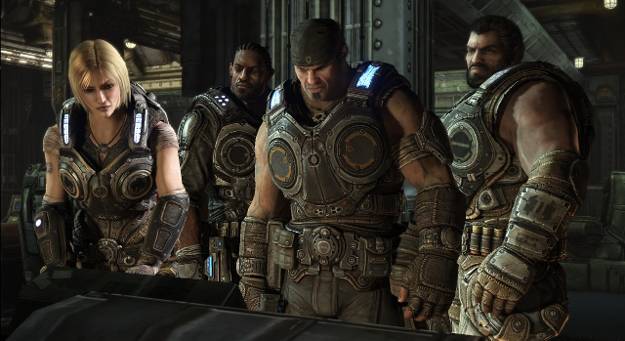 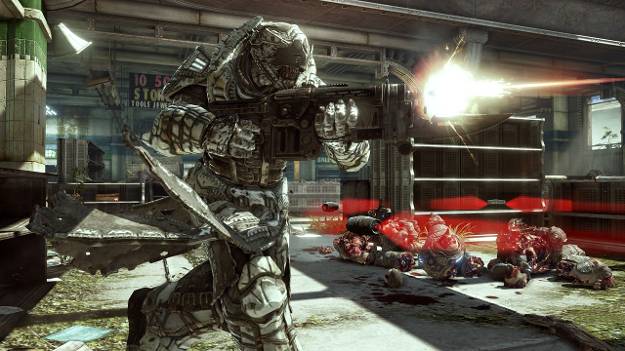 It's first thing in the morning at day 2 of E3, and Cliff Bleszinski is hung over. There is none of his usual swagger, bombast, or shrewd industry analysis. Instead, what we're greeted with is a weary pride that his team's populist gaming masterpiece is nearing completion. He shakes everyone's hand, gives me a hug, and gets right down to the demo, which is the same part of the game that was shown at the Microsoft press conference. This time, however, it's a guided tour. He wasn't happy that, in the interest of celebrity-driven hype, the press conference made four-player campaign co-op look like only two, and he's intent on showing off what his baby can really do.

Last year, the Gears 3 demo was a whirlwind: go in, watch demo, ask a few questions, get out. This year, every time someone asked a question, Cliffy B pauses the game. When asked to move a character or the camera to a certain place, he obliges, proving that the demo isn't hiding any hidden weaknesses or rough spots. Unlike my experiences with the presentations for so many past Xbox heavy hitters (cough Halo 3 cough) I'm left with a sense of something beyond hype. We got to really get a good look at the advancements that make Delta Squad and the rest of their shot-to-shit world look and play better than ever.

Every time I see Bleszinski interact with Gears, I'm struck by how thoroughly he cares about the product, the fan reaction to it, and the growth of the industry in general. We talked about the heavily-debated concept of the female Gears being equal-opportunity chainsaw targets, an addition that makes some fanboys squirm. Cliff's response to this is "ask any of our female fans: if we hadn't put that in, they would have been pissed." As a female fan of Delta Squad, I'm backing him on this one.

He says that the women in Gears don't look like "no offense, booth babes". I'm not sure what the "no offense" part was about, but he believes that the gaming industry is moving beyond that narrow depiction. This is an exciting concept: if one of the titans of the gaming world thinks that it's time to treat female characters as interesting people instead of sexual trophies, and is prepared to put that into practice in one of the Xbox's biggest successes, then there is hope that at least one entertainment medium will no longer be afraid to expand beyond stereotypical limitations. With a smirk, I thank him for making their tagline of "Brothers to the End" a gender neutral term. He chuckles sheepishly and shrugs.

But Bleszinski is a technician as much as a digital philosopher, and he intently shows off the improvements to the Unreal engine, including the new global illumination upgrade. I'm a digital light geek, so I lean in and peer at the screen, studying the glistening high definition details that are now evident even in deep shadows. Furthermore, large-scale visual events don't create those tiny lurches in graphics anymore, and can happen during gameplay instead of cut scenes. The new mech suits – something the Gears team has wanted to do since they pitched the series as "mechs versus monsters" – animate smooth as silk. The lambent Leviathan is gorgeous, gory, and gigantic, and looks fantastic even as you target its fish-like yellow eyes through your gun's scope.

Speaking of guns, some new ones are shown off. The most notable is the Vulcan, a two-person co-op weapon that won't actually be available fighting the Leviathan. They put it in demo because it's cool. "Because it's cool" is the reason given for many of the things the Gears team does.

Of course, "because it's cool" also explains Horde 2.0 multiplayer mode being available for play on the show floor. The line to play it was... pardon the pun... epic... but I watched over players' shoulders and people were having a blast. So, yes, horde is back. Settle down, everyone.

So the Epic team listens to its fans. But the developers also take a personal interest in "because it's cool", and set their own brass rings to reach for. Bleszinski alludes to the theme of losing one's father being a shared experience among the three producers of the Gears franchise, which makes the ongoing mystery of the elder Mr. Phoenix... hell, the surname Phoenix in itself... pretty heavy stuff.

Story and character are important to the Gears franchise despite the grumbling that the storytelling technique it uses doesn't provide enough of the former. For the third installment, the pacing of the campaign is changing to give every character his or her "personal" moment. In Bleszinski's words, they "Pulp Fictioned" it, and the action jumps backward two hours after the first battle with the Leviathan. The focus also shifts from Marcus and Dom to Baird and Cole, which can be nothing but awesome where dialogue is concerned. Previous demos have revealed that we even get to see Cole Train's home field, complete with product endorsements.

In Bleszinski's words, it's a "satisfying" conclusion, but it's the end only of this story, not necessarily stories in the Gears universe. Coy isn't his style, and he said that he'd love to make another Gears, but doesn't want to run the franchise into the ground by pumping out games too quickly.

Furthermore, Gears 3 will feature not just the longest campaign in the Gears games, but the longest campaign in the studio's history. Cliff repeats that it's about "wrapping it up and making personal", and so the Epic team is willing to go farther and take some risks, so that this blockbuster Xbox title is more than a lambent infected cash cow. It's a journey of pushing the creative limits of the technology and the development team. When asked what he's proudest of, Bleszinski, in a moment of behind-closed-doors humility which starkly contrasts his public bombast, answers "finishing it."